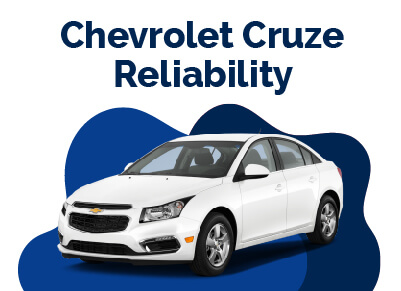 The Chevrolet Cruze is an affordable car and is also one of the most reliable vehicles on the road today. But is Chevy Cruze reliable?

According to repairpal.com, the car has a rating of 4 out of 5 stars for its reliability. The cost of repairs is also lower compared to other small cars, and the frequency of service is also lower.

A dependable vehicle for years can be maintained by regularly performing routine maintenance, such as oil changes and tire rotations.

The Chevrolet Cruze has many features to appeal to buyers and the average person who needs a reliable vehicle. Its comfortable ride and good gas mileage make it an ideal choice.

This article discusses everything you need to know about Chevy Cruze reliability!

According to repairpal.com, the Chevrolet Cruze has a 4.0 out of 5 stars for its reliability. It's ranked 26th out of 36 compact cars in the country.

The 2017 and 2016 Chevrolet Cruze models received the highest scores from J.D. Power, which places them in the second and sixth places, respectively, in their respective classes. These two models were able to earn 88 points out of a hundred.

Why Chevy Cruze Is Considered Reliable

The following are reasons why the Chevy Cruze is considered reliable;

The Chevrolet Cruze can handle most driving situations, although its acceleration is sometimes off-putting.

Its smooth ride and strong brakes make it an ideal choice for those who like to drive on winding roads.

The Chevrolet Cruze has five people in two rows, and both rows have enough room for most adults. Its interior looks good and features soft-touch materials and plenty of space. However, its sloping roofline limits rear cabin space.

The 2019 Chevrolet Cruze has two sets of LATCH car-seat connectors. These are designed to fit the rear seats but require a lot of force to attach. The institute for highway safety gave this system a marginal rating because it's not easy to use.

The Chevrolet Cruze has multiple standard features, such as the MyLink infotainment system. This system is easy to use and features a responsive touch screen. Its physical controls allow users to easily access various functions.

The standard features of the Chevrolet Cruze include a 7-inch touch screen, Bluetooth, and a USB port. It also comes with a four-speaker stereo and a Wi-Fi hotspot.

Even though it's safe for your family, the Chevrolet Cruze still has plenty of cool features that will improve your driving experience.

Some of these include Bluetooth connectivity and an AM/FM CD player. It can also be equipped with a satellite radio compatible with Android Auto and Apple Play.

Newer models come with a backup camera, GPS, and USB ports for charging and streaming devices.

The Chevrolet Cruze has various body styles and trims levels, and its cargo space can vary depending on the model.

The compact car also offers more space with the addition of its folding rear seats. The L and LS models have a combined trunk of 15.6 cubic feet, while the Premier and LT have 13.9 cubic feet.

The Chevrolet Cruze is also equipped with various safety features, making it an ideal choice for those looking for a safe vehicle at an affordable price.

These include front, side, and overhead airbags. It also has stability control, anti-lock brakes, and daytime running lights.

The Chevrolet Cruze is also safe for both new and experienced drivers. Its various safety features make it an ideal choice for anyone looking for a reliable vehicle at an affordable price.

The Chevrolet Cruze is also unique because it can be used in sedan and hatchback models. With that in mind, you can choose the one you prefer, and you don't have to compromise on either aspect of the car.

The cargo version of the Chevrolet Cruze adds additional space, but if you prefer the traditional sedan look, you don't have to sacrifice that aspect.

The Chevrolet Cruze is also considered a reliable vehicle at an affordable price. According to repairpal.com, it has a 4 out of 5 stars rating for its reliability.

Its lower average cost of repairs and lower frequency of repairs make it an ideal choice for people looking for a reliable vehicle for a long time.

The Chevrolet Cruze is prone to developing problems over time due to the wear and damage of its various components. Here are the most common issues that owners encounter with their cars.

Some 2018 Chevrolet Cruze owners have experienced engine problems. They said their cars would stall while they were driving. The issue could be caused by various factors, such as faulty sensors, a bad alternator, or a lack of fuel.

The issue has reportedly affected some 2018 model Chevrolet Cruzes. According to the owners, their cars would suddenly stop working.

The owners said the issue was caused by a damaged cylinder that leaked oil. In some cases, shrapnel from the metal got into the turbo injector and caused costly repairs.

Some 2017 Chevrolet Cruze owners reported that their cars would suddenly stop working due to a cracked piston. It usually costs around $100 to replace this component.

Is the Chevy Cruze a Long-Lasting, Reliable Car?

The compact car made by Chevrolet can run up to 250,000 miles on a properly maintained basis. Based on 15,000 miles per year, it should last for around 13 to 17 years before it breaks down or requires costly repairs.