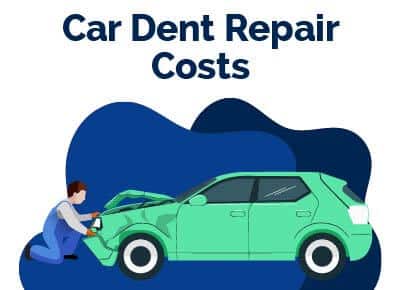 It's impossible to keep a car free of scratches and other types of damage throughout its lifetime.

So instead, try fixing it by hiring a professional car dent repair service. Depending on the model and location of the damage, the cost of car dent repairs can range from $50 to $300.

Getting hit by another vehicle while parked in a parking lot is a common cause of car damage.

But, unfortunately, it's also a part of having a car. Sometimes, the paint can come off after the vehicle has been hit.

Even though many people believe that having a scratch-free car is a myth, it's still possible to have a vehicle without scratches and even a dent. Getting the issue resolved quickly can be very helpful.

The article covers everything you need to know about car dent repair and cost.

The average cost of car dent repairs can vary depending on the damage caused and the location of the damage.

Some factors that can affect the cost of car dent repairs include the size and location of the damage, as well as whether or not you need to have the paint removed.

The size and location of the damage can also affect the cost of car dent repairs.

Extensive dent repairs are typically more expensive than smaller ones due to how they prevent the use of paintless dent repairs.

This process involves carefully removing and repairing the damaged surface without harming the car's paint.

If the damage is too significant, then it's not possible to use paintless dent repairs.

Instead, the entire surface of the damaged area must be repaired, and the car's paint must be removed to restore it.

Then, after thoroughly cleaning and drying the site, new paint can be applied, and the body panel must be replaced.

Depending on the type of damage and the location of the damage, the cost of car dent repairs can vary.

The size and location of the damage and the number of panels damaged can also affect the cost of repairs.

If there are many damaged panels with different-sized marks, it can take longer to get the repairs done.

Getting the repairs done at the right place can also affect the cost of car dent repairs.

You can take various steps to find a car repair shop that's right for your vehicle, but you'll generally pay more for an experienced technician than someone who's not as experienced.

One of the essential factors you should consider when choosing a car dent repair technician is their reputation.

They can help you restore your vehicle to its original condition and ensure that it will perform as well as it should after an accident.

Hiring a professional technician will cost you $500 to $1,000 more than an inexperienced technician.

There are two common ways to fix car dent damage. One uses paintless dent repairs, and the other uses the traditional method.

Although traditional methods are commonly used to fix car dent damage, they can be more expensive than alternative methods.

The traditional method involves the technician pounding out the damaged area to create a mold conforming to the car's original shape.

Once the body has been molded into the desired shape, it's painted and then sand-blasted down to primer and paint to match the rest of the body.

Although repair is generally cheaper than replacing the entire body, the traditional method requires a skilled technician to get the job done right.

In addition to the body's shape, this process involves matching and painting the paint.

Unlike the traditional method, the paintless dent repair process is more modern and doesn't require the car to be painted.

Instead, this process involves analyzing the damaged area to determine if it's suitable for applying the paint.

The technician then has access to the damaged area by removing any pieces that might be in the way.

Then, the technician can transform the damaged metal into its original shape through specialized tools.

Although the paintless dent repair process is commonly used, it can only be performed if the original paint has been damaged. Therefore, this method is not suitable for car dent repairs.

Also, if the body damage has caused the metal to be thin, the traditional method is unsuitable for this repair.

Despite this, the paintless dent repair process is generally cheaper than the conventional method.

What Is the Average Cost of Fixing a Car Dent Using Paintless Dent Removal?

If you're looking for a more cost-effective and eco-friendly way to remove a dent from your car, then paintless dent removal is the process for you.

This method is usually performed on a localized dent that won't require a new paint job.

It's swift and easy to get the job done, and the technician will tell you that the paintless dent repair process is precisely what your vehicle needs.

For each damaged panel, a paintless dent removal job costs around $150 to $250.

However, this can vary depending on the type of damage and the complexity of the task performed by the technician.

For instance, if the damage is extensive and the location of the dent is challenging to repair, then the cost of a paintless dent repair could be more than $500.

What Is the Average Cost of Fixing a Car Dent Using Other Panel Beating Techniques?

If you're not satisfied with the results of the paintless dent removal process, then alternative methods can be used to fix the damaged part of the body. Usually, these procedures involve the use of a unique filler.

If the technician takes the damaged panel out of the vehicle to fix the issue, this can increase the cost even further.

Multiple panels can also be damaged by the same dent, increasing the price.

A significant dent on your car door can cost around $200 to $400. However, a small, isolated dent that requires the entire door to be painted and blended can be as high as $800.

On the other hand, if the damage is extensive and multiple panels are damaged, the cost of repairing it can be as high as $1,700.

What Is the Average Cost of Fixing a Car Dent Caused by a Hailstorm?

Hailstones are a common cause of car dent damage, especially in Australia's unpredictable climate.

Although hail damage can only be repaired with paintless dent removal, the average cost can vary depending on the nature of the damage and how many hailstones it has received.

What Can't Be Fixed with Paintless Dent Repair?

Although the paintless dent removal process can be beneficial for specific car problems, it can't be used to fix all of them.

For instance, it shouldn't be used in areas with chips, scratches, or even peeling paint.

Also, if the metal has been warped or stretched out, the paintless dent removal process might not be able to fix it.

The cost of repairing a car dent can vary depending on the type of damage and the technician's task.

Usually, the size of the damage is the first factor considered when determining the cost.

Minor dent damage, typically less than a quarter, can be easily repaired and fixed with a quick and straightforward process.

These minor repairs usually don't require a technician and can be priced at around $50 to $200.

If a foreign body causes a moderate dent, then it can be costly to fix. These repairs usually require much work and can take longer than minor repairs.

A severe dent is much more significant and requires a lot of expertise to fix. These repairs can be costly and should only be carried out by a professional auto repair shop.

The position of the dent can also affect the cost of repairs.

For instance, the labor-intensive process can be more costly if a car has multiple dents, such as those caused by hailstone damage.

Other factors, such as the vehicle's age and the car's make and model, can also affect the cost of repairs.