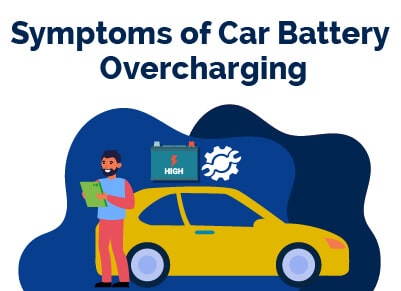 The battery is the heart and soul of a car's electrical system. It's responsible for producing electricity from the mechanical energy generated by the car's components.

Overcharging is a common issue that car owners face when it comes to their batteries. It can decrease the battery life, make them harder to turn over and lower their efficiency. In some cases, it can also lead to battery explosion.

Sadly, so many car owners are unaware of the proper handling of car batteries, which is why we have many cases of overcharged batteries.

Why is My Car Battery Overcharging?

Battery overcharging is more common than most people realize. It can be challenging to detect by an amateur car owner.

There are several reasons for car battery overcharging. They include the following;

A broken alternator can cause the electricity to stop working correctly, leading to the battery's death.

Also, if a faulty alternator is placed in the car or it's running at the wrong rate, this can lead to overcharging the battery.

The car's battery will overcharge if the voltage regulator is not working correctly.

This happens when the flow of electricity from the battery is interrupted.

For example, a defective voltage regulator can send too little or too much electricity to the battery, leading to overcharging.

If an external battery charger is used to charge your car batteries, it can lead to overcharging and decreaced efficiency if used incorrectly.

Therefore, it's essential to understand how long it should take to recharge a particular battery.

Having a good understanding of this will allow you to avoid overcharging.

CAUTION: In addition to overcharging, the summer heat can also affect the functioning of the car's battery.

If the car's battery has been overcharged and exposed to the summer heat, it can cause other problems.

There are symptoms to look out for if you suspect your car batteries might be overcharging. They include the following:

1. If the Battery Gets very Hot When Charging

If the car's battery gets very hot when it's charging, it's possible that the charge could radiate as heat. Overcharging can cause an electric charge to become too hot.

When the battery gets too hot, it can cause electrolytes to evaporate, which then lowers the level of charged electrolytes.

When the car's battery gets too hot, it can cause the battery to evaporate, which then reduces the level of electrolytes present in the car battery.

2. If the Voltage Guage Reading is High

If the car's battery is overcharging, it could cause the dashboard to read high voltage. The ignition voltage would be high, but it usually settles down to 13 to 14 volts.

If the dashboard shows a high voltage reading of 15 volts or more, the battery may be overcharging.

Therefore, it is advisable to check if the issue is related to overcharging.

If the car's battery is overcharged, it could cause a faulty alternator to develop. This could create a high level of hydrogen gas inside the battery.

In addition, if the battery is completely sealed or poorly vented, the hydrogen gas could swell the part of the battery.

4. If the Car Headlight Burns Faster than Usual

If the car's headlights start to burn too fast, it could be caused by overcharging.

If the headlights blow out before they're ready to go out, it could result from overcharging.

5. If the Battery is Leaking

If the car's battery is overcharged, it could cause a leak or seeping issue.

This could happen because the hydrogen gas build-up in the battery causes the electrolyte to evaporate through the vents and caps.

This could be very dangerous, so it's essential to check it regularly.

As we established earlier, the car's battery is responsible for storing the electrical energy needed to start the vehicle.

A working battery is essential to ensure the car will still run.

You can take various steps to keep the car's battery in good working condition. They include the following:

Mix equal portions of baking soda and water, and use it to clean both terminals.

After thoroughly cleaning the battery, use a wet rag to wipe the terminals.

The corrosion and rust on the battery can affect its lifespan and performance.

After thoroughly cleaning the battery, use a terminal spray to protect the parts from further corrosion.

Hold a can 4 inches away from the terminal, and apply the solution until the connection is covered.

After the car's battery has been connected to the terminal, use a terminal spray to coat the connection point and the battery's terminal to prevent corrosion.

To prevent the battery from vibrating excessively, tighten the hold-down. This will enable the device to remain firmly in place.

The hold-down bar of the car's battery is designed to prevent it from vibrating and damaging the device. To check the battery's condition, open the hood and shake it.

If the hold-down bars are loose, the car's battery might vibrate excessively.

To fix this issue, locate the bolt that connects the hold-down to the battery. Then, turn the bolt clockwise and tighten it.

4. Using a Protective Cover (Where Necessary)

If you live in an area where the weather is cold, wrap the car's battery in a protective cover to prevent it from getting damaged during the cold weather.

A battery heater is a jacket that fits over the battery and keeps it warm. You can purchase a battery warmer from your local auto parts store.

A battery warmer is available in two types: an insulated fabric cover and a rubber wrap.

The former is less effective and is usually cheaper. The rubber wrap provides additional insulation to the battery.

If the fluid level in the battery is low, add distilled water to it. Also, take out the battery's vent caps.

Then, using a flashlight, look inside each cell of the car's battery to confirm.

If the fluid level in the battery is too low, it will not cover the battery's plates.

To ensure the fluid level is correct, add distilled water to the battery until it reaches the refill holes.

Before replacing the battery's vent caps, use a clean and soft cloth to remove any excess fluid. Doing so will prevent dirt from getting inside the device.

Always replace the car's battery when it's time to do so. Before buying a new one, ensure it's not more than a month old.

Getting a new battery is also important since they get old and deteriorate.

When the car is not running, your appliances' power will come from the battery.

Remove all plug-in devices from the charging port, such as GPS navigators and cell phones.

Don't plug them back in until the car is started. Never plug anything in while the vehicle is off, as this could drain the power and cause a dead battery.

The interior lights and headlights should also be turned off when the engine is off.

Like appliances, these lights draw power from the battery when the car is not running.

Regular driving can also help recharge a car's battery. It's essential to keep the vehicle running for at least 20 minutes weekly to give it enough time to recharge.

If you can't drive the car because of illness or other reasons, try running it for 20 minutes. This will help recharge the battery.

When it's time to recharge, charge the car's battery at 12.6 volts. This will allow it to perform correctly and keep its lifespan.

A voltmeter can also be used to check the current of the car's battery.

If the vehicle's current is below 12 volts, a battery charger can be used to recharge it.

Follow these steps to connect the negative and positive leads to the car's battery terminals.

Aside from figuring out what’s causing your car battery to overcharge, it is also essential to know how to properly maintain your car battery, so you don't end up with a dead battery leaving you stranded.