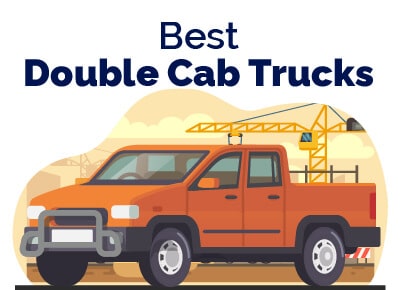 Double cabs are a bit of an enigma. On the one hand, they fit more cargo and passengers than the classic regular cab; on the other, they still pale in comparison to roomy crew cabs. Yet their in-between status doesn’t make them a market pariah.

On the contrary, they remain popular with buyers who appreciate the additional in-cab space and the option to take an extra passenger or two in a pinch.

Here’s the three we think are the best, in order of size. You can also find our top picks for the best single cab and crew cab trucks. 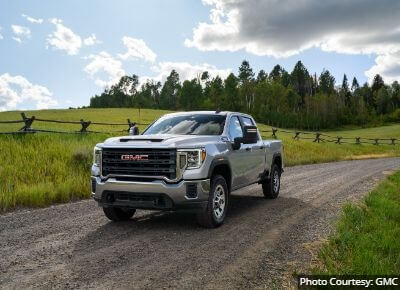 It’s slim pickings if you’re interested in a heavy-duty truck with a double cab: only Ford, Chevrolet, and GMC offer the cab style, and of those, the Chevy and GMC are similar enough under the skin to be twins. After looking at the double cab design of each, we have to give the nod to the GMC.

Credit GM’s approach of using a pair of real, actual truck doors rather than the half-doors that are far more common among pickup trucks. These traditional, forward-hinged doors enable easy access to the second row of seats - no need to first open the front doors to release the rears.

The bigger doors also correlate to a bigger rear passenger compartment, with the GMC boasting 35 inches of rear legroom. Compare that to the F-250’s traditional double cab, which only has 33 inches of legroom.

Inside, the GMC has the advantage over its Chevrolet sibling thanks to a slightly upgraded interior, though there has been some disappointment among critics that the quality of the GMC isn’t quite up to par for the price point. This is especially true on the nicer trims.

We haven’t spoken much yet about truck stuff, like payload and towing ratings, but don’t worry - the GMC more than delivers in that regard. With the available Duramax diesel, buyers get a truck pushing 445 horsepower and 910 lb-ft of torque. It’ll tow up to 20,000 pounds of a fifth-wheel trailer with the double cab and haul three tons of weight in the bed - the latter of which can be accessed by a trick six-way tailgate, a GMC exclusive.

The GMC Sierra HD combines a useful, spacious double cab with serious payload and towing ratings, and for that, it’s our favorite HD double cab.

Check out our picks for the most reliable heavy-duty trucks here. 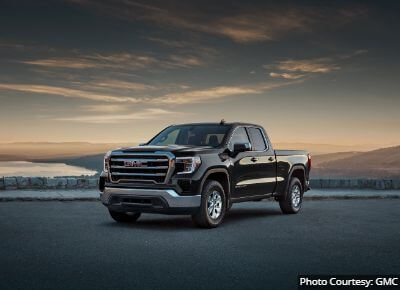 Okay, maybe you saw this coming based on our opinions of the HD truck class. But here’s the skinny: Ram doesn’t make a double-cab, instead only offering two flavors of the crew cab. Ford, Toyota, and Nissan all stick with the traditional double-cab design that is inherently restrictive of rear passenger space and usability. Only GM shrinks down a crew cab to double-cab dimensions, and we’re fans of the design. So the GMC takes the win in this full-size truck class as well.

The dimensions of the cabin don’t change from HD to light-duty, so again Sierra buyers enjoy 35 inches of double-cab rear legroom, which is more than any other double-cab. We particularly like the available head-up display and the variety of optional towing assists.

Most of those assists are bundled under the ProGrade Trailering System moniker, and they include an in-vehicle app to monitor relevant trailer vital signs and a multitude of cameras showing fifteen different camera angles. The most novel of these angles can show what’s directly behind the trailer, typically a major blind spot. Other helpful towing features include an electronic parking brake that engages automatically when the truck is in tow/haul mode and a dedicated light that illuminates the hitch.

The light-duty Sierra has numerous engine choices available, including multiple gas V-8s, a diesel six, and even a turbocharged four-cylinder. Our favorite of these is the time-tested 5.3-liter V-8, a venerable but beloved engine that makes 355 horsepower and 383 lb-ft of torque. It’s powerful, versatile, and isn’t an expensive upgrade over the base V-6. It’ll also haul up to 2,170 pounds in the bed, the highest payload rating for the double cab design.

Interestingly, the best engine for towing doesn’t come from the available diesel - that’s actually towards the bottom for towing among the Sierra’s engine roster - but rather from the 6.2-liter V-8. With 420 horsepower and 460 lb-ft of torque, this engine will lug up to 12,100 pounds when using a conventional hitch on a double-cab truck. The double cab also unlocks the highest towing capacity.

Powerful, tech-laden, and roomy - the double-cab Sierra makes a fine case for itself in a highly competitive segment, and it’d be our choice among double cabs.

Check out our picks for the most reliable full-size trucks here. 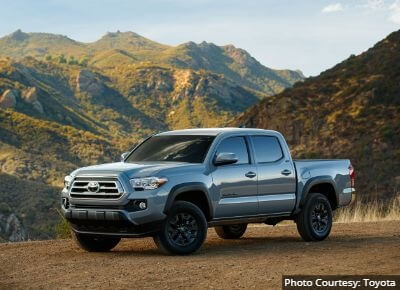 The Toyota Tacoma is an iconic truck. For decades now, it has brandished Toyota’s reputation for excellence and durability; it’s come to the point that new models are better a deal than used, since these trucks seem to be immune to depreciation. That sort of reputation doesn’t just come about by happenstance - it’s earned. And the Tacoma is the brand’s best exemplar of just how this is done.

First off, let’s be clear: the Tacoma doesn’t tow the most weight in the class. That distinction goes to the Chevrolet Colorado and its 7,700-pound towing rating. The Ford Ranger hauls the most at 1,770 pounds. The Toyota, meanwhile, will tow up to 6,400 pounds and carry up to 1,560 pounds in the bed. While not class-leading, they do promise plenty of capability.

While the maximum payload rating requires the base four-cylinder, the towing prowess comes courtesy of the more common 3.5-liter V-6. This engine has been around for some time, but it makes a decent 278 horsepower and 265 lb-ft of torque while returning 18 mpg city and 22 mpg highway.

None of these figures are particularly impressive by themselves - the American-branded trucks are more powerful and a bit more efficient - but what is noteworthy is Toyota's reputation for longevity. Don’t take our word for it: Consumer Reports recently ranked the 2021 Toyota Tacoma third among small pickups - and the only trucks ahead of it were the crew-cab only Jeep Gladiator and Honda Ridgeline.

The Tacoma’s double cab gets rearward-opening half doors that open to an ominous pair of stiff, straight-backed buckets that are the norm in this truck's size. Unlike the full-size pickups, which can fit a full bench seat in the back of a double cab, the midsize trucks must resort to these pseudo-seats. At least there’s 32.6 inches of legroom, which beats out the Chevrolet Colorado and GMC Canyon.

Though the Tacoma might not be the best truck objectively, it offers a well-rounded package to those looking for a capable, reliable, usable midsize truck. That appeal has kept values high and depreciation low, and it has also earned the Tacoma a spot on our list.

Check out our picks for the most reliable midsize trucks here.

Which Is the Best Double Cab Truck?

In our eyes, the best is the full-size, light-duty GMC Sierra 1500. To summarize our thoughts, we find this truck the perfect balance of spacious, comfortable, practical, and modern. GMC married the best aspects of a full-size truck with a better-designed double cab than the competition.

Want to learn more about truck cab and bed configurations. Check out our detailed breakdown here.

Which truck has the biggest double cab?

Which is better, the crew cab or double cab?

Depends on your needs. Do you drive your family around in your truck frequently? If so, get the crew cab. If you typically travel solo, the double cab is a better bet thanks to its smaller size and its generally superior towing ratings.

What’s the difference between a crew cab and a double cab?

The crew cab features four full-sized doors; the double cab uses a pair of half doors in lieu of traditional rear doors. The result is a cab that is smaller than the crew cab by a good margin but not as tight as the two-door regular cab.

Do crew cabs have shorter beds than double cabs?

Typically yes. Most double cabs feature a choice of beds, usually measuring 5 or 5.5 feet on the low end and up to 8 feet on the high end. Crew cabs are typically limited to the smaller end of that scale and generally can’t be ordered with a bed larger than 6.5 feet.

What is the best heavy-duty double cab truck?

The GMC Sierra HD combines a useful, spacious double cab with serious payload and towing ratings, and for that, it’s our favorite HD double cab.

What is the best full-size double cab truck?

Powerful, tech-laden, and roomy - the double-cab GMC Sierra makes a fine case for itself in a highly competitive segment, and it’d be our choice among double cabs.

What is the best midsize double cab truck?

Though the Toyota Tacoma might not be the best truck objectively, it offers a well-rounded package to those looking for a capable, reliable, usable midsize truck. That appeal has kept values high and depreciation low, and it has also earned the Tacoma a spot on our list.