Best and Worst States for Taking Your Driving Test

Thinking of moving to another state? Find out where it's easier - and harder - to pass a written driving exam. 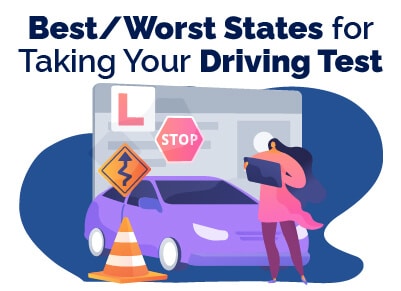 But since young car owners couldn’t learn the traffic laws from their horse-and-buggy parents, early motoring was rife with accidents, speeding, and run-down pedestrians.

In response, Rhode Island became the first state in 1909 to require license applicants to pass a written test on road rules. The proudly independent folks in South Dakota put off that indignity for half a century.

Also Read: What Happens If You Get Pulled Over With a Learner's Permit

Car Deals Aren't The Only Way to Save!

A Diverse Nation with Diverse Standards

Some of those early traffic-law exams were pretty rigorous; other states asked just a few cursory questions as a formality. To this day, variations in exam requirements still make it easier to get behind the wheel in some states than others.

As a guide, we’ve gathered data for all US states to compare the number of test questions, the percentage you need to get right, the number of drivers per capita, and the cost of the exam, to rank the best and worst states to take your driving test.

The Five BEST States for Taking Your Driving Test

In this tiny state with less than a million people, an impressive 83% of adults have passed their written exam and taken to the roads. With no major cities, there are few urban dwellers getting around solely on public transportation.

Citizens in Delaware have to answer 30 road knowledge questions, and get 80% of those right, to receive their license. The cost of the test is just $5, making this among the best states for taking a driving test. 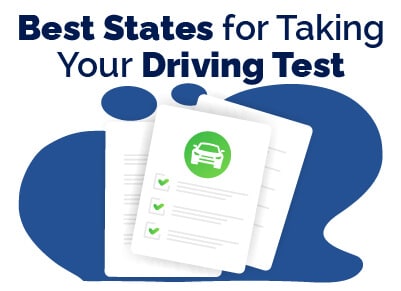 Due to population growth here, city streets, interstate highways, and even some winding country roads have seen growing amounts of traffic. Smart drivers know to bypass Nashville if they can, rather than try to drive through it.

Tennessee driving exams also have 30 questions, but their DMV is a bit more lenient, expecting you to nail just 77% of them. The state’s 79 drivers per capita paid only $5 to take their written exam.

Despite being far bigger than Delaware, this mountainous northwestern state has roughly the same number of drivers: about 812,000. The other 200,000 or so residents presumably have no place to go or couldn’t pass the test.

Maybe that’s because Montanans face slightly more stringent written driving exams. They have to answer (or correctly guess) 82% of the 33 questions. The $5 test fee, the same as the other top states in our analysis, hopefully, isn’t much of a barrier.

If you get a question on your written exam about distracted driving, know that only texting and emailing are prohibited. This means that chomping on a cheeseburger in the middle of a busy intersection is okay, but hopefully not during your licensing road test.

This southern state comes up similar to others on our top-five list, requiring that you get 80% of the 30 test questions right. But with only 75% of driving age people actually driving here, perhaps those questions are a wee bit harder.

With little change in its agricultural scenery, you can drive from border to border in Nebraska without feeling you’ve gotten very far. Still, with only 25 road test questions, it won’t take a lot of your time before you can get started.

About 1.4 million of Nebraska’s 1.9 million residents – about 73% – have taken the test, gotten at least the required 80% of the questions correct, and paid their $5.

Also Read: The BEST State to Buy a Car

The Five WORST States for Taking Your Driving Test

Yikes! With 50 written questions to answer, this dusty state doesn’t make it easy for its citizens to take to the road. It’s no wonder only 63 out of 100 Oklahomans have a license in their wallet.

If you’re applying for a license here, hopefully, you’ll get 40, or 80%, of the answers right, because you’ll be paying the $16 testing fee either way. 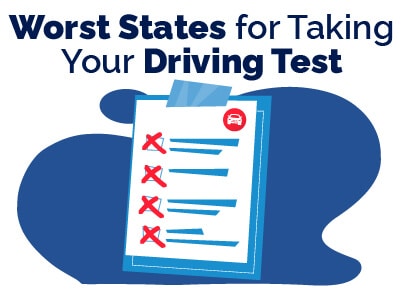 With almost 18 million people, this independent-minded territory is the second most populous state in the union. Though locals often say that everything’s bigger in Texas, the relatively low count of 61 drivers per capita would have to be an exception.

The state requires you to provide the right answer for 80% of their 30 written questions, and the standard testing fee is $15.

By the numbers, the written part of the driving exam here seems like a relative breeze; you only need to ace 70% of 20 questions on traffic rules. But with just 63% of adults on the road, apparently, they don’t make those 20-questions-for-20-dollars easy.

One also has to account for the many car-less dwellers in the NYC metropolis. Plus, with over 12 million drivers jockeying for position on New York’s busy roads, the driving skills road test is likely more unnerving and challenging than most places.

If you want to live close to the Las Vegas casinos, the odds of winning a license are similar to many other states, with 80% of the questions requiring correct answers.

What raises the stakes is the relatively high $31 you have to lay down to bet on your driving knowledge. Plus, more than just about anywhere, it’s a game of skill that requires you to slog through 50 test questions. About 67% of Nevada citizens have won the right to drive.

The District of Columbia of course is a city, not a state. Many find it hard to navigate the grid-like street arrangement interrupted by wide diagonal avenues.

You need to get 75% of the 25 test questions right in order to pass. The hefty $26 it costs to sit for the written driving exam here helps push Washington D.C. to the bottom of our list, ranking it as the worst state for taking your driving test.

Also Read: The WORST State to Buy a Car

Are You Forgetting Something? 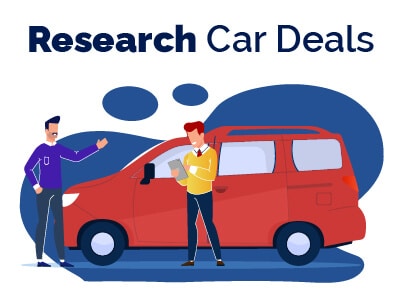 Once you’ve passed your written driving test in the state of your choosing, you’re free to drive anywhere. But are you sure you want to be seen in the outdated car you drove into town in?

If it’s time to start fresh with updated wheels, you may end up spending less than you think. How? By doing your research and getting an amazing deal on that new model you’ve had your eye on. Start here.