Can You Add Oil To a Hot Engine? 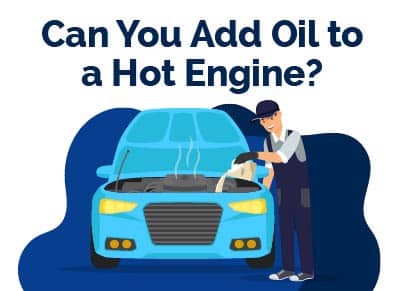 So, you’re driving your car, probably traveling and you suddenly notice the “check oil level” sign on your car dashboard, indicating that your oil level has gone down, and you need to top it up.

Yes, adding oil to a hot engine will not harm the engine. However, you should only do this when you are just topping up your oil rather than changing it entirely or checking the oil level.

Let’s discuss more about this!

Can You Add Oil To a Hot Engine?

But according to some theories, cold oil can cause cracks in the metal components of a hot engine.

This is because the metal will expand and contract when the temperature increases or decreases, which could cause a sudden deformation.

An example would be a glass that breaks apart if you pour boiling water into it. Adding oil to a hot engine is not as dangerous as it sounds, except if you want to change the oil entirely.

Since the metal components of a hot engine are relatively flexible, they can withstand the effects of the oil without breaking.

Also, since the oil absorbs less heat than water, it can't cool down as quickly as water. Therefore, you can add oil to a hot engine when you’re only doing a small top-up. But if changing the oil, you must wait for several minutes to check the oil level.

After that, the engine will cool down on its own, and once you remove the oil from the tank, it will not be as hot.

One of the essential factors you should consider when adding oil to a hot engine is ensuring that it doesn't overfill. The easiest way to check the oil level is by using the MAX and MIN markings on the tank. For most vehicles, the difference between these markings is just a single quarter.

So, to ensure that the oil is at the maximum level, add around 0.125 gallons at a time.

Why Is It Important To Gauge Your Oil Correctly?

Aside from keeping the engine running smoothly, lubricating the moving parts of your car is also essential. When the engine runs, dirt and soot accumulate inside the vehicle, blocking the narrow pathways.

To prevent this, the oil should contain detergents that can dissolve these deposits. The oil also helps cool the engine by absorbing the heat from the parts exposed to extremely high temperatures, such as the cylinder head and the pistons.

Modern engines use oil coolers to ensure that the temperature of the oil stays within limits specified by the car's manufacturer. An oil pump also brings the oil under pressure through the entire engine. This component is usually connected to a variable valve timing solenoid or hydraulic valve tappets.

The hydraulic valve tappets' operation depends on the amount of pressure brought under by the oil pump. Maintaining the proper oil level is also essential because it can affect the cooling and lubrication properties of the engine.

If the oil level is low, it can overheat and break down, leading to the oil's degradation. This can cause various issues, such as decreased oil pressure and engine running issues.

How To Check the Oil Level

Even if your car is in the best possible condition, your engine may still consume a small amount of oil while running. This happens as the movement of the cylinders causes a thin layer of oil on the cylinder walls to get burned during combustion.

Also, some oil fumes can escape through the intake manifold ventilation system. As the components wear and seals get damaged, these can increase.

One of the easiest ways to check the oil level in your car is by using a dipstick. You can pull out this thin metal strip to measure the engine's oil level.

Some newer cars also have electronic sensors that can measure the oil level. Although this method is easier to use, it can still fail if the sensors are not working correctly.

Since the oil level can expand and contract as the temperature increases, checking it with the engine warmed up to the required operating temperature is essential.

Doing so will allow you to get the most accurate readings. However, if the engine is cold, overfilling the oil could cause damage to the car.

How Long Does It Take the Engine To Cool?

If you're only adding oil to the car, you don't need to wait for the oil to cool down before it's ready to be filled.

On the other hand, if you're planning on changing the oil, you'll need to wait for at least 2 hours before it cools down.

If you're adding oil to your car, ensure the engine is excellent. Doing so will allow you to drain the fuel without causing it to get too hot.

Also, once the vehicle's other components cool down, they become more efficient, allowing you to avoid getting hurt.

How To Add Oil to Your Car

You should not change the oil if it's too hot or cold. Doing so could cause your vehicle to burn or encounter difficulty trying to drain the oil. You should start your car for a couple of minutes to allow the oil to flow freely.

Before starting your car, make sure it's parked on a flat surface. Raising your vehicle can be done with a jack stand. First, put newspapers down and then the drain pan. You can remove the plug and put the pan underneath your car with a socket.

Once the oil drain is out, turn the plug back on and locate the oil filter. You must loosen the filter using a filter wrench before removing it.

After you have all the oil out of your car, apply a little motor oil to the gasket. Doing so will help prevent the oil from sticking to the filter and cracking.

After the new filter, you should replace the oil with a new one. Before you start the process, make sure that you thoroughly read your vehicle's owner's manual.

Your vehicle's owner's manual will recommend the type of oil you should use.

Most commonly, it will advise you to use 5W-30 because it's versatile and can be used year-round. However, it's essential to remember that the season and location can affect the type of oil you should use.

Using too thin oil could potentially damage the internal components of your vehicle's engine. Doing so will prevent the oil from properly lubricating the car's parts.

When it comes to synthetic versus traditional, cars with newer engines tend to run better than synthetic ones.

On the other hand, older vehicles with standard engines perform better with conventional oils.

Should You Add or Change the Oil?

If you have an issue with your oil, your vehicle may have a light that says it's at risk of damage.

This tells you that there's not enough lubrication between the various components of the engine.

Sometimes, your vehicle will knock or click to let you know that it has an issue with its oil level.

This is caused by the lack of lubrication between the various components of the engine.

Dirty oil can cause your vehicle to break down and decrease its fuel efficiency. It can also damage the engine's components.

If you smell an oil smell in your vehicle's cab, it could indicate that your car has an oil leak.

How Much Oil Is Too Much on the Dipstick?

Every dipstick indicates how much oil is in its system. It can either be marked with a MAX or MIN gauge, or there is a groove in the middle of the indent.

After you've cleaned and reinserted it, hold it flat to measure how far the oil has reached.

If the mark is beyond the groove or the MAX mark, then there's too much oil in the system. Some of it should be let out through the drainage bag.

What Happens if Too Much Oil Is Added?

Overfilling the engine can be a severe issue. When the oil levels in the pan increase, the crank will come in contact with it and mix it with air, which will create foam that won't be able to lubricate the engine properly.