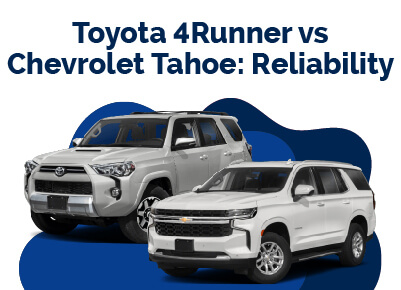 You are stuck trying to make a better choice for an SUV that can handle all your needs. One that can run errands, manage extreme driving conditions, and always respond to your call. Your choices fall between 4Runner vs. Tahoe. Is a Toyota 4Runner more reliable than a Chevy Tahoe? Which is better, Tahoe or 4Runner?

The truth is, it is difficult to conclude the reliability of the 4Runner and Tahoe because both cars have different features and capabilities.

However, the fact remains that 4Runner is more reliable than Tahoe. Toyota has a better reputation for reliability than General Motors, so it will be tough to place any car from General Motors at the same level as Toyota.

With the Toyota 4Runner, you are assured of better engineering designs, durability, lower maintenance cost, and longevity.

The Chevrolet Tahoe is a good option too. You will get better horsepower, gas mileage, and even towing capacity. Both cars’ safety ratings are similar, but Toyota 4Runner has higher reliability ratings.

4Runner vs. Tahoe Reliability: Which is Better?

On different levels, 4Runner and Tahoe are great cars that anyone will like to identify with. It is difficult to place one above the other, as they have incredible features, strengths, and weaknesses.

However, Toyota has maintained a reputation of reliability, unlike Chevy, which has many dents in its image. This will give customers the impression that Toyota cars are always better than Chevy cars. But is 4Runner better than Tahoe?

Aside from the higher reliability ratings, 4Runner also offers cheaper repair and maintenance costs than Tahoe. This includes less chance of major or minor repairs.

Concerning consumer reports’ annual buyer’s guide, there are more recommendations for purchasing a 4Runner than a Tahoe. 4Runner’s advice goes back six years, while Tahoe only has a two years recommendation.

This does not in any way mean that Tahoe is trashy. It only means that you will get a higher assurance and guarantee that your 4Runner will last longer with less maintenance cost than on Tahoes.

Aside from these, Tahoe has better capabilities than 4Runner. You get better gas mileage, more towing capacity, more engine power and strength, and more passenger space.

The choice between Tahoe and 4Runner should depend on if you want features and specs or a car that will last longer with fewer worries. If the latter is the case, 4Runner is more reliable.

4Runner and Tahoe have a lot in common regarding design and structure. The design philosophies of both car brands differ, but the implementation of both models isn’t much different.

The Toyota 4Runner is designed to achieve high-level performance and comfort without sacrificing safety, just like the Tahoe.

Tahoe and 4Runner are designed to handle whatever you throw at them. You are assured of outstanding performance when riding through pavement, grass, or dirt. However, there are slight variations in the designs of both cars.

In the past few years, Tahoe has reported cases of transmission and engine problems. These design flaws impacted the reliability of their vehicles. However, most of these flaws have been rectified with recent models. Tahoe comes with a better engine than 4Runner.

This includes more towing capacity, better fuel economy, more passenger space, and an intuitive infotainment system. Although, you will get excellent cargo hold from 4Runner and exceptional offroad driving performance. The choice boils down to your driving needs and preference.

It is essential to mention that you will get an 8-seat capacity from Tahoe, as against 4Runner’s 41.7 inches, with more legroom, shoulder room, and hip room. This is more room for your family and friends.

The wheelbase is longer on Tahoe, but 4Runner gets a better ground clearance of 9 inches as against Tahoe’s 8 inches.

The infotainment system is fair on both cars; HD radio is optional for 4Runner, but unavailable for Tahoe, but the navigational system is standard on Tahoe but optional on 4Runner. You have to choose what you want.

No matter how appealing the 4Runner is, Tahoe presents better engines and performance. Tahoe offers multiple engine options, which deliver better performance than the 4Runner, no matter your choice. The 2023 Chevrolet Tahoe provides 5.37L V8 gas and a 3.0L Turbo diesel engine.

These engines deliver up to 355hp against 4Runner, which delivers 270hp. This includes the fact that the Tahoe engine makes provisions for a 10-speed automatic against the 4Runner that offers a 5-speed automatic transmission.

The overall engine performance of the Tahoe reflects on its towing capacity. It pulls a whopping 8,400 pounds, as against 4Runner’s 5000 pounds. This includes that the Trailer Hitch receiver is standard on Tahoe but optional on 4Runner.

Fuel economy is also better on Tahoe engines than 4Runner. The differences are slight, but it is worth mentioning.

It is a tough comparison between 4Runner and Tahoe regarding safety. This is because both cars have different areas in which they flop and areas in that they perform exceptionally well.

Both vehicles have standard 4-wheel disc brakes and ABS systems, Tahoe integrates a standard lane-keeping assist, but 4Runner optimizes a Cross-Traffic Alert system. Most of the necessary safety packages are standard on 4Runner, premium, and optional on Tahoe.

On the new Toyota 4Runner, you get standard driver airbags, passenger airbags, rear head airbags, and front side airbags.

On the other hand, Tahoe offers Rear Parking aid and lane-keeping assist, which is absent in 4Runner. However, you will get a standard Blind spot monitor on 4Runner, optional on Tahoe. Both cars have an overall 4-star NHTSA safety rating.

Tahoe offers better gas mileage than 4Runner. The differences are not much, but we must mention them. Chevrolet Tahoe records a gas mileage of 15 mpg city, 20 mpg highway, and 17 combined.

This is against 4Runner, which records 16 mpg city and 19 mpg highway. However, Tahoe adopts a bigger 24 gallons fuel tank capacity. This is a better 4Runner which offers 23 gallons.

Although Tahoe has many problems on its trail, it is not less durable as it seems. 4Runners will last up to 300,000 miles if maintained properly, the same as Tahoe. Both cars have an average lifespan of up to 20 years, so that you can get much value for your money.

4Runner records a 0.4 frequency of unscheduled repairs, Tahoe drops to 0.3 but picks up at the chances (16%) of a major repair as against 4Runner’s 13%.

The truth is that the standards for reliability for 4Runner and Tahoe are tricky. This greatly depends on individual ownership, usage, and maintenance habits.

The Toyota Tahoe has always maintained an impressive standard of reliability and durability, unlike the Chevrolet Tahoe, which has reported cases of engine and transmission problems.

What year Tahoe have transmission problems?

What goes wrong with Tahoes?

We’ve mentioned that one of the primary reasons that make Tahoes unreliable is its numerous problems.

Here are some of the common problems of Tahoe and what goes wrong with the car.