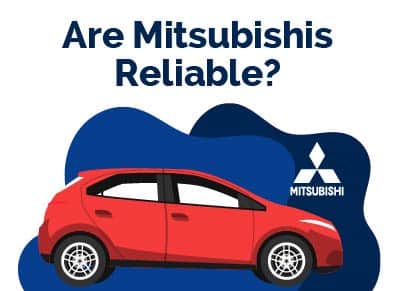 Mitsubishi cars are very cheap. Their existence dates back to 1970, yet they are not popular in the United States. Is this an indication that they are unreliable, or maybe nobody cares about their cars even though they are affordable?

The Mitsubishi brand hasn’t had a consistent ride of reliability. Even though Japanese cars have an impressive record of reliability, Mitsubishi looked like an exceptional case for this belief. Their design, engineering principles, and overall quality weren’t commendable.

However, the car has picked up the pace, improving its recent deliveries to prevent the brand from going into extinction. This decision geared the company into expanding its line-up and incorporating the production of Mitsubishi SUVs. But are Mitsubishi reliable?

Well, Mitsubishi is a fairly reliable car brand. They are not too good to deserve huge praise, but they are not as bad as we think.

Let’s look at Mitsubishi’s reliability and why they are falling behind among other Japanese brands.

Mitsubishi is a fairly reliable vehicle. There was a time when Mitsubishi was a reliable car brand. The brand basked in the glory of reliability during the 90s.

This was the era when they maintained the status quo of Japanese brands. In 2000, Mitsubishi started facing many declines. With the scandal of manufacturing defects and rumors that they used cheap materials on their cars, there were many reasons for customers to believe that they were unreliable cars.

Buying a Mitsubishi gives you the worry that after 100,000 miles, they will start burning oil and acting up. We believe most of their parts were made of cheap materials like piston rings, transmissions, etc.

Seeing Aisin transmissions on Mitsubishi cars was funny because those are Toyota’s. Well, if they can’t make better car components, there’s no harm in buying from reliable companies.

However, many people still haven’t seen anything good about the Mitsubishi brand, and Consumer reports are not exempted from the list.

Technology has been a tricky thing for many car brands. The need to provide high-tech systems for users usually comes at the cost of efficiency, and in most cases, these systems become too complex and difficult to maintain.

Mitsubishi is still finding it hard to draw a balance between technology and customer experience. The drop in Mitsubishi’s reliability is because of its non-appealing deliveries. The technology isn’t innovative, and the standard of delivery is not up to what is obtainable in other brands.

We’ve seen a tech upgrade in the ASX, but there is a need for reliable tech to spread through all models of the Mitsubishi line-up.

There’s simply nothing appealing about Mitsubishi cars. Instead of producing lots of cars for everyone, they focus on a few cars, redesign, facelifts, lots of tweaks, and the same platform.

The minor changes are done to keep the cars in the market and not to match customers’ growing demands.

For instance, the ASX crossover was launched in 2010. They’ve sustained the sale of this car from that time until now, with nothing other than minor changes.

The Mitsubishi brand doesn’t seem to understand the need to build next-generation cars or consistently introduce trims and varying models that accommodate every user.

If there’s one annoying thing about the Mitsubishi brand, it is the consistent problems that they come with.

Although RepairPal rates Mitsubishi a 12% probability of a major repair and a 0.2 chance of minor repairs, we will be forced to believe the company is improving its standards, but the worries remain the same.

Many users always complain that Mitsubishi cars are made from pieces of junk, and the build quality is nothing to write home about.

It is always advised that if you make up your mind to buy a Mitsubishi because they are cheap, you should spare some of your savings to fix them when the cheap parts start breaking down.

The durability and reliability of the overall build and engines of Mitsubishi cars depend on how you use and maintain them. You can count on the newer Mitsubishi models to last long. They are better than the mediocre cars that they delivered in the past.

The cost of maintaining a Mitsubishi is cheaper than the annual average for all car models. This covers the cost of scheduled and emergency repairs.

Mitsubishi has a high safety rating. They have many cars earning ANCAP five-star ratings and the top safety pick award.

With low emissions, you can achieve a gas mileage of 35 and 41 MPG on the city and highway for these Mitsubishi cars.

The reliability of the Mitsubishi brand has risen greatly in recent years. But as expected, it is still hard for people to trust them again.

There are several good Mitsubishi cars produced lately. We might not have a special preference for any, but we advise you to conduct extensive research before purchasing.

We cannot give you an affirmative reply on the durability of Mitsubishi cars. Mitsubishi cars last as long as you can maintain them. They can last as long as 150,000 to 200,000 miles or 10 to 13 years, but you should expect them to start acting up after getting up to 100,000 miles. Some models, like the Mitsubishi Outlander, can last well over 250,000 with a lifespan of 13 to 17 years. It all boils down to your driving conditions and maintenance habits.

How expensive is it to maintain a Mitsubishi?