Hyundai Tucson vs Santa Fe: Which Is the Better Crossover? 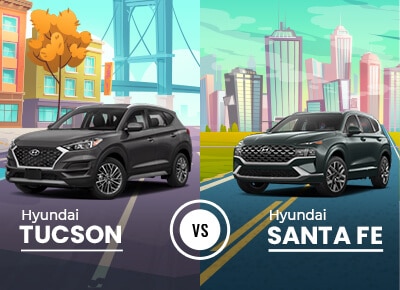 Shoppers searching for a modern, upscale two-row crossover will find Hyundai has many from which to choose.

The Tucson is a compact five-passenger crossover about the size of the Toyota RAV4.

The Santa Fe is also a five-passenger crossover, but it has a smidge more interior passenger room and performance than the Tucson line offers.

Is the Hyundai Tucson Right For You? 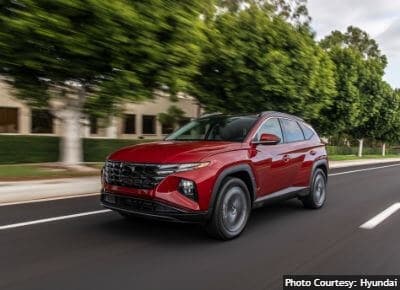 Shoppers who may be considering a Honda CR-V or Toyota RAV4 but want something a little more upscale and modern may find the Tucson fits the bill. The Tucson has an interior that is sleeker and more modern-looking than the mainstream crossovers in this segment.

The Tucson features infotainment and controls “exempt from hard-touch buttons,” as Hyundai puts it. That means you need to use the infotainment screen to do almost everything. While the look appeals to us, in our testing, the volume knob was missed, and the HVAC controls were difficult to operate without taking eyes off the road.

The Tucson uses a 2.5-liter, four-cylinder (non-turbo) engine as its main engine, and its power and fuel economy are comparable with most of the vehicles in this class. Hyundai has moved back to a traditional geared automatic after many years of quality problems with its dual-clutch transmissions. There is also a hybrid and plug-in hybrid version of the Tucson.

In our testing of the $38,704 Tucson Limited Hybrid AWD, we found the powertrain to be one of our favorite features of the vehicle. The Eco Mode is more than powerful enough for everyday driving, and the Sport mode made the vehicle fun and responsive on mountain roads.

Is the Hyundai Santa Fe Right For You? 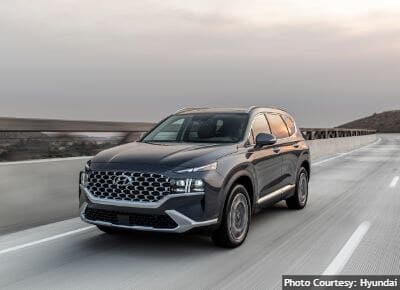 Although the Santa Fe is a bit larger outside, we didn’t feel as if it were much larger inside than the Tucson. In fact, according to Hyundai’s specifications, the Tucson has a larger cargo area. What the Santa Fe does add are power and features.

Our $43,430 Caligraphy trim Santa Fe 2.5T AWD tester immediately impressed us with an interior that seemed richer and more luxurious than the top-trim Tucson we had just stepped out of. Furthermore, the engine is more powerful than the smaller turbocharged hybrid engine in the Tucson Hybrid Limited. One notable added feature was the head-up display that made keeping our eyes on the road easier.

Both vehicles drive smoothly and turn without feeling tippy. However, the Santa Fe feels a bit more substantial when underway. This is subjective, but the numbers also point to the Santa Fe having more mass.

The Tale of the Tape - Capacities 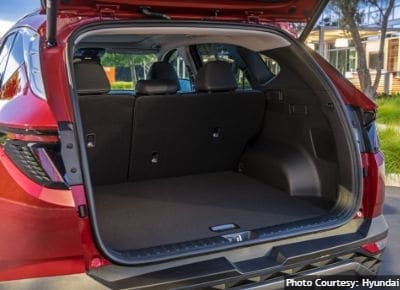 The biggest surprise for us was that Hyundai lists the Tucson as having a larger cargo volume. Inside, the Santa Fe seems a bit larger, but not dramatically so. 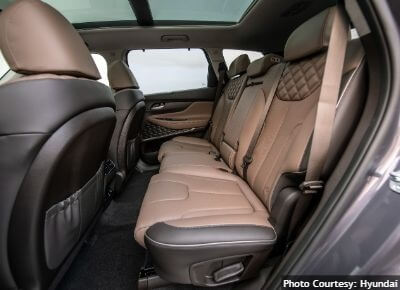 The Tucson starts at just under $27K and rises to nearly $40K in the Hybrid trim. The plug-In hybrid version’s pricing has not yet been announced and will be higher, but will also likely qualify for tax incentives and rebates in some states. As always, our prices include Hyundai’s mandatory freight charges.

The Hyundai Santa Fe starts at $29K and can rise in price to $45K. Hybrid and plug-in hybrid prices have not yet been announced. They will be a bit more, but the plug-in may come with some EV incentives depending upon your state. 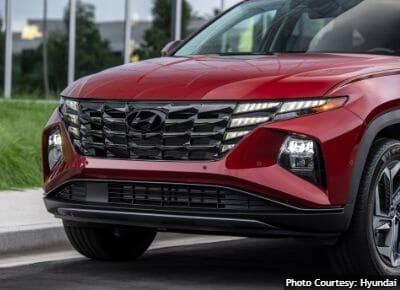 We were unimpressed with the 2022 Tucson Limited Hybrid AWD we tested. It displayed a 29 MPG average over our week of testing. Well short of the EPA estimated 38. Our short-term test may not be indicative of the vehicle’s MPG overall, but we seldom test a vehicle that does not meet the EPA Combined estimate. Most vehicles we test exceed that estimate. 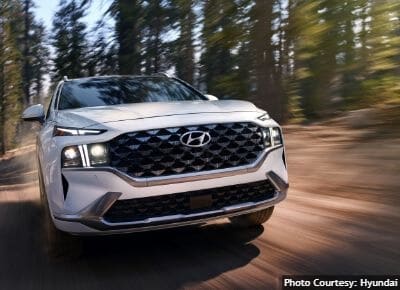 The base SE trim of both the Tucson and Santa Fe lacks some popular active safety equipment such as Blind Spot monitoring and rear cross-traffic alert.

Which one is better, the Hyundai Tucson or Hyundai Santa Fe?

The Santa Fe is positioned above the Tucson in Hyundai’s lineup. Though both are similar in size, the Santa Fe has some features the Tucson does not offer.

How many rows of seating does the 2022 Hyundai Santa Fe have?

Hyundai has gone back and forth with the number of rows of its Santa Fe. For 2021, the model now has just two rows. Hyundai’s new Palisade is its three-row crossover SUV.

Which one is bigger, the Hyundai Tucson or Hyundai Santa Fe?

Externally, the Hyundai Santa Fe is a bit bigger than the Tucson. However, inside both are similar in size. Interestingly, Hyundai says the Tucson has a bit more cargo volume.

Which one has a higher towing capacity, the Hyundai Tucson or Hyundai Santa Fe?