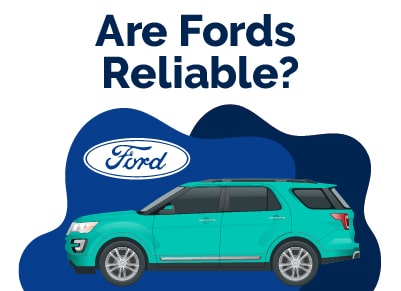 Are you interested in buying a new car, probably a Ford vehicle? You will love to know how reliable they are.

Ford cars are one of the most popular American brands. Founded in 1903, the Ford brand, which started with the Model A, now has a lot of good cars to its name. However, history and an old brand identity don’t equate to reliability. But are Ford reliable cars?

Yes, Ford is fairly reliable. We cannot identify Ford as an extremely reliable brand, this is because its reliability fluctuates across different years of production and models. Sometimes they are great, but other times, users battle recalls and unreliable engineering designs.

Ford has an average reliability rating on most reliability survey platforms. They have a high repair and maintenance cost, and users will have to deal with the 15% probability of a major repair. However, Ford has a great safety rating and an impressive technology package.

Read on to learn more about why Ford is fairly reliable and what you should consider before buying one.

The Ford brand seems to be maintaining an unpopular rule: the bigger, the better. This has seen Ford delivering more reliability in its bigger cars, trucks, and Mustangs.

Ford’s unstable and poor reliability rating is because of the common Ford problems that affect its reliability. However, the possibility of your Ford car having numerous problems and average reliability depends on your choice.

For instance, the Ford F-150 has impressive reliability, sitting as one of the top-selling cars in America for over 30 years. We can’t say the same for the 2011 and 2017 Ford Edge.

On Ford brands, you will enjoy some levels of fuel economy that you can rely on in some of its models. There are a lot of Ford cars with high safety ratings, and you can always rely on Ford’s Power Stroke engine for impressive performance. However, you will have to battle other issues, such as maintenance costs and the tendency to run into unnecessary major or minor repairs.

Why Fords Are Considered Fairly Reliable?

Here are the major reasons why Fords are fairly reliable.

There is no need to mince words that Ford produces great engines with outstanding performance. Ford has some of the best engines for towing, speed, or power. No matter your driving needs, there is a Ford engine for you.

Ford’s Power Stroke engine beats the Duramax and Cummins engines in horsepower, towing strength, and better design. If you need an engine that you can rely on for real driving conditions, you should consider getting a Ford.

Some of Ford’s best engines are:

These engines provide varying horsepower, torque, and strength. Their reliability is undeniable, but you must choose according to your needs.

Some Ford cars, like the Ford explorer, earn a five-star rating on NHTSA. The high safety ratings of Ford cars span across different years, and this is because of Ford’s active investment in its safety technologies.

Ford adopts a co-pilot 360 technology that gives a second pilot on the wheels. You have extra eyes and legs to ensure that you always reach your destination safely.

Some of Ford’s safety technologies include:

There is no argument that Ford is a strong brand. These cars are built tough, rock solid. Ford has a reputation for making strong and sturdy cars.

The strength of these cars not only supports the users’ safety but also aids the durability of these cars. Ford cars last between 150,000 to 200,000 miles.

The durability of these cars depends on your driving conditions and maintenance habits. Users can also rely on the Ford warranty status to extend how long they can use these cars before repairs.

The sad thing about Ford cars is the maintenance cost and the probability of major repairs. Ford has an average annual repair and maintenance cost of $775. This is higher than the average $652 cost for all brands.

There’s also a 15% probability of severe damage and an average 0.3 chance of visiting the mechanic. It would be best if you made inquiries about your preferred model before making a purchase. This will save you the stress of dealing with problematic Ford cars.

The Ford Fusion, Fiesta, Escape, and Focus are not left out as some of the Ford cars with great fuel economy.

Why Do Fords Have Death Wobble?

Ford is battling because most of its cars have death wobble. This problem is evident in most Ford F-series trucks, dating back to the 2005 models.

The Ford death wobble is caused by premature and abnormal wear, weakening, or loosening of the car’s track bar joint, bushings, shocks, control arms, struts, or damper bracket. While we wait for Ford to issue a recall on the cars affected by the wobble, drivers are advised to learn how to fix the death wobble issue in their cars.

We believe our guide on Ford’s reliability status will help you decide if they are the best choice for you and which years and models you should avoid.

Is Ford expensive to maintain?

Ford cars usually last between 150,000 to 200,000 miles. However, this greatly depends on proper driving conditions and good maintenance habits.