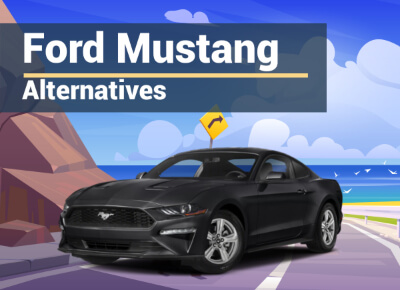 The Ford Mustang is America’s quintessential sporty coupe. It can be surprisingly affordable or prohibitively expensive. One thing is universal: its ability to bring smiles to drivers and passersby alike.

But is it perfect? On many accounts, no. In its efforts to be all things to all people, the Mustang is a jack of all trades and master of none.

If you’re wondering what else might be worth cross-shopping, we’ve rounded up our top four alternatives to the iconic Mustang.

The Takeaway: The Mustang’s ubiquity might not be to everyone’s taste, and the lack of practical space may also be a turnoff. 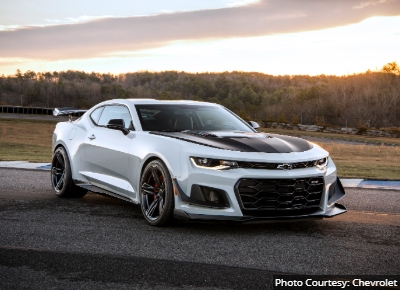 Perhaps the most obvious alternative to the Mustang is its longtime rival, the Chevrolet Camaro. As a similar-sized two-door sport coupe available with a variety of powertrains, it’s impossible to talk about the Mustang without mentioning the Camaro.

Like the Mustang, the Camaro hinges its appeal on affordable performance. Base models with the four-cylinder begin around $25,000; for a loaded-up V-8 with all the goodies, expect to pay around $70,000. Comparatively, a Mustang starts around $27,000 and winds up close to $75,000 in Shelby GT500 trim.

The only car on this list that might offer more powertrain options than the Mustang is the Camaro. It starts with a 275-horse turbocharged four-cylinder; a six-cylinder making 336 horsepower is also on offer. The cheapest V-8 offers 450 horsepower, while a supercharged variant makes 650 horsepower.

A Mustang, by contrast, offers a more powerful turbo-four but no six-cylinder option. Its entry-level V-8 makes either 460 or 480 horsepower depending on trim. The GT500 uses its own 5.2-liter V-8 making 760 horsepower.

Inside, the Camaro deviates from the Mustang by trumpeting its own 1960s heritage. That’s likely to the favor of the Mustang: ever since the Camaro was relaunched in 2009, critics and consumers alike have been vocal about the claustrophobic interior. Blame the small windows and monotonous, all-black, plastic-heavy dashboard.

The Takeway: If you can get past the interior, the Camaro offers comparable performance to the Mustang at a nearly identical price point. If you’re looking at the Mustang but don’t necessarily bleed Ford blue, check out the Camaro. 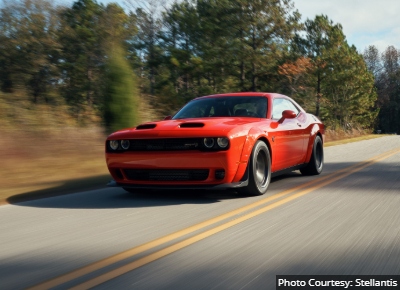 Also hailing from Detroit is another muscle-car heavyweight: the Dodge Challenger.

Unlike either the Mustang or the Camaro, the Challenger is an unabashed homage to everything old-school. The styling drives this home: with its quad round headlamps, long hood, and flanks that seem directly sourced from its 1970 inspiration, the Challenger shouts its history at anyone passing by.

The biggest thing to know about the Challenger is, well, its size. There's no denying how huge this coupe feels, whether from the curb or the driver's seat. Unlike just about any other modern sports car, Dodge uses its full-size sedan platform as the basis for the Challenger; that means it is by and large the same car as the Chrysler 300 and Dodge Charger, as far as the hardware is concerned.

On one hand, that's great for practicality. A trunk measuring nearly 17 cubic feet and a back seat that's actually usable by adults means the Challenger is more practical than its rivals by a wide margin; available all-wheel drive only drives home the point that the Challenger could easily be a stylish daily driver rather than a plaything relegated to the weekends.

The size becomes a drawback when the roads get technical. The big Dodge will corner, but not with nearly the same verve as either the Mustang or Camaro.

In a straight line, our performance concerns disappear. Most models will be equipped with a V-8 of some sort, whether that's a 375-horse 5.7 liter V-8 or a supercharged 6.2-liter V-8 making nearly 800 horsepower. A V-6 comes standard and is the only engine that pairs with the Challenger's segment-exclusive all-wheel drive option.

The Takeaway: The Challenger stands out for its classic styling, an impressive lineup of V-8s, and an interior that's both roomy and comfortable. It should be the go-to choice for someone who wants a fun car that can fit the whole family and handle the daily commute. 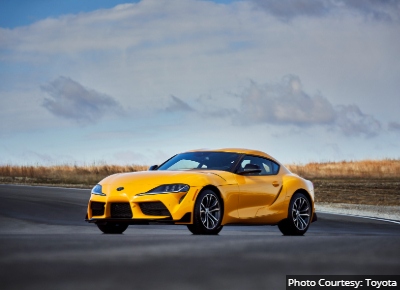 A newcomer to the realm of sports cars under $50,000, the Toyota Supra brings a Japanese aesthetic and philosophy to a segment that has been lately dominated by American muscle. For buyers not into the swaggering Detroit coupes, the Supra is a breath of fresh air.

Supras come with either a base turbocharged four-cylinder or an optional turbocharged six-cylinder. The latter is the headlining powertrain on account of its 382 horsepower. If that figure sounds familiar, it's because Toyota borrows the powertrain from BMW as part of a deal the two companies brokered. BMW provides the powertrains; Toyota does its own styling and tuning. BMW's twin to the Supra is the Z4 roadster. If you want a Supra convertible, plan on shopping at the BMW store.

Though the Supra's turbo powertrains don't have the muscle or might of the Mustang's V-8s, they still provide plenty of thrust when you lay into the gas. With the 2.0-liter, 0-60 mph arrives in under five seconds; upgrading to the six-cylinder shaves about a second off that time. These numbers best the Mustang, whose turbo-four manages a 0-60 mph time of 5.1 seconds and whose V-8 does the deed in 4.1 seconds.

Inside, the Supra's BMW lineage is apparent in the upscale materials and trim. It's a more intimate space than the Mustang, as it lacks a back seat - this is strictly a two-seat affair. The trunk is likewise small, so you and your traveling buddy should plan on packing light.

The Takeaway: If you want a sports car with origami design, exotic vibes, and sharp handling, the Supra is well worth a look.

You may qualify for deals and incentives, check out this month's Toyota deals. 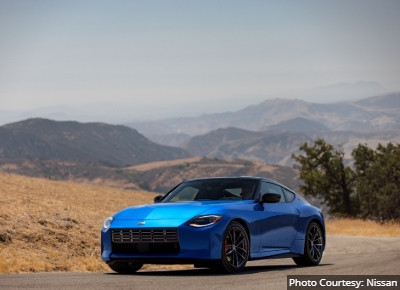 For a long time, Nissan’s Z has felt like an outdated afterthought. Small upgrades here and there weren’t enough to keep it a viable competitor against other sports cars with affordable price tags. The last few years have seen sales dry up as buyers have looked elsewhere.

That’s all in the past, though. Nissan just pulled the ropes off an all-new Z that’s set to hit the streets next year, and it appears that this new model will once again make the nameplate relevant. The most notable upgrade is the styling, which keeps the familiar Z shape but modernizes the details. It’s squat, muscular, and exceedingly clean. It looks smaller than the Mustang and isn’t nearly as vocal in communicating its performance pedigree.

Power will come from a twin-turbo six-cylinder that should be good for 400 horsepower and 350 lb-ft of torque. Like the Supra, those figures fall short of the Mustang, but they’ll still get this Z moving plenty quick on account of the car’s small size. As a two-seater weighing around 3,200 pounds, the Z won’t be a slouch.

The interior will perhaps be the most notable update, as the new Z finally, finally gets a cabin aligned with the current era. A modern, sleek dashboard fits a large touchscreen measuring either 8.0- or 9.0-inches. A digital instrument cluster accompanies dash-top analog gauges. The two seats are heavily bolstered and were inspired by the GT-R.

The Takeaway: Supposed to start at around $35,000, it puts some serious pressure on the Mustang and the rest of the segment when it comes to affordability and performance. If you’re willing to wait a few months, we’d recommend giving the new Z some serious consideration.

You may qualify for deals and incentives, check out this month's Nissan deals.

What models compete with the Ford Mustang?

Primarily the Chevrolet Camaro and Dodge Challenger. The Toyota Supra and Nissan Z are other alternatives offering similar or better performance at the same general price point.

The Dodge Challenger currently holds this title. It starts at just under $36,000 for a V-8-equipped R/T trim.

Is the Mustang fast?

Yes. Even the four-cylinder can do 0-60 mph in about five seconds; V-8 models only need about four seconds to get there. A Shelby GT500 will keep up with bonafide super cars - both in a straight line and on the track.

Is the Mustang practical?

Not really, but you could still drive one every day presuming the climate is conducive. The trunk holds 13 cubic feet of cargo, and a pair of back seats are great for storage or hauling a friend or two across town. Low clearance, rear-wheel drive, and lots of power make it a poor choice for winter driving, though.