That’s not as easy a comparison as one might think. For starters the F-150 has an astounding 44 variants when adding up all the bodystyle, trim and drivetrain combinations, whereas the F-150 Lightning features a mere four, all of which are 4x4 SuperCrew editions with a 5.5-foot box.

So, what does one begin to compare?

For simplicity’s sake (and a hefty dose of fairness), this comparison will focus on a matchup between a same-sized, four-wheel drive Platinum trim of each model. 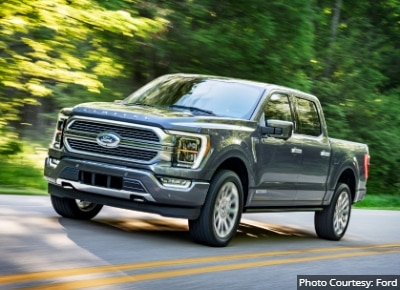 Other than some front and rear exterior cosmetics and a charge port, you might not distinguish the F-150 Lightning from the F-150 at first glance even though the evidence becomes obvious on closer inspection. For instance, the Lightning being all-electric does not need a large functioning grille up front. Even so, Ford has made a clear effort to not to stray too far away from the conventional visual comfort zone in the design and size of the Lightning, while still making a clean break from the internal combustion engine (ICE) tradition.

Small differences in size between the Platinum editions with the small bed are essentially insignificant except for ground clearance. That one-inch advantage here, which the ICE-equipped model maintains, translates into the difference between having a 20-degree ramp breakover angle versus 17.6 degrees. But keep in mind we’re just comparing trim to trim. A 2WD version of the gasoline SuperCrew model has the same ground clearance rating as the 4WD electric one.

We could make a big deal about the difference in payload ratings which are significant at the Platinum trim level (see chart). However, it’s not a fair basis to compare these models in total. The numbers balance out somewhat overall if you dig into the full lineup of F-150s where depending on model/trim, SuperCrew payload ratings run from 1,760 lbs to 2,900 lbs. with the F-150 or from 1480 lbs. to 2235 lbs. with the F-150 Lightning.

To its advantage, the Lightning has 400 lbs. of additional payload capacity under the hood in an area called the “frunk” – a space not to found in the conventionally powered F-150 Platinum 4x4 with its massive 5.0-liter engine.

The Takeaway: If you’re looking to make a case for one over the other based on size, you would be better off looking elsewhere. Yes, there are more bodystyle and bed-length choices with the traditional F-150, but that’s different argument. For the most part, Ford has made the size discussion a non-starter. Interestingly, the all-electric Lightning offers up a nifty 14.1 cu. ft. of storage in the frunk. 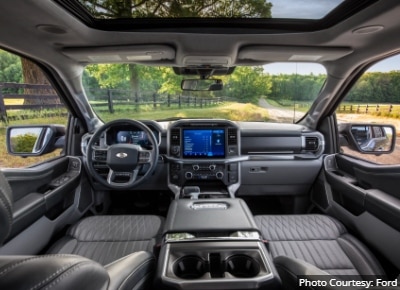 Even though interested buyers can start their shopping at around $32K for an F-150, or around $40K for the Lightning, the amenities and overall elegance available in the respective Platinum editions will cost significantly more. Strangely though, the Lightning Platinum is tagged at nearly $24K more than its F-150 Platinum counterpart.

Notably, the Lightning accentuates its all-electric identity by providing a cadre of interior access points to the electrical energy in its veins – three 12-volt DC power outlets and seven 120-volt AC ones, compared with the gasoline-powered Platinum’s single DC and three AC outlets. Obviously, that doesn’t account for $24,000, but its an indication of the extent to which Ford has taken advantage of opportunities inherent in an all-electric architecture.

Overall, the upmarket ambience of both Platinum trims is on par with the premium class standard found across today’s pickup truck market. Luxuries such as leather seating, a 10-way power adjustable driver’s seat, a Bang & Olufsen sound system are all standard. Curiously, the Lightning Platinum gets a 15.5-inch infotainment display, whereas the F-150 Platinum gasoline model gets a 12-inch one, and the ultra-high tech BlueCruise system for hands-free driving comes standard on the Lightning Platinum but is a $1995 option on the F-150 Platinum.

The Takeaway: If you’re shopping for luxury, you’ll find it in either version of the Platinum. The Lightning takes it to a bit of a higher level, but there’s a price to be paid. However, some of that outlay may be recouped in energy savings. Read on. 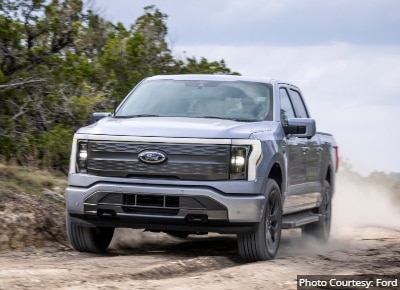 However, none come close to the Lightning’s 563 horsepower and 775 lb.-ft. of torque. What is quite magnificent about having an all-electric powertrain is that the electric motors straddling each axle deliver all that torque nearly instantaneously. Turns out, there’s quite a lot of efficiency in this setup, too.

It is estimated that the Lightning Platinum consumes 51 kWh of electricity every 100 miles. If one pays 25 cents per kilowatt hour for electricity (incl. generation, distribution, transmission, etc.), it’ll cost $12.75 to travel 100 miles in the Lightning based on EPA ratings. To go the same distance at the same expense, gasoline would have to cost $2.40 per gallon. (Incidentally, in parts of the country where electricity costs a little as 10 cents per kWh, gasoline would have to cost less than a dollar per gallon to match up to the Lightning.)

For some buyers, range will weigh heavily in their considerations. Here gasoline has an edge over electricity in the F-150 / F-150 Lightning comparison. But the reality may be more relative than the absolute numbers. Sure, a 23-gallon fuel tank delivering 437 miles of driving tops a 131-kWh battery providing 300 miles, but does that matter if you never drive more than 300 miles in a day?

A more subjective area of performance to focus in on is the rear suspension. The F-150 utilizes a tradition leaf spring/solid axle setup whereas the Lightning employs independent semi-trailing arms, coil springs and a stabilizer bar. Traditionalists will swear by the solid axle for its heavy-duty reputation, but the independent suspension does provide more comfort.

The Takeaway: Of all the factors that go into a vehicle’s performance, the two questions that drivers most often ask are, “How much power does it have?,” and “What is the fuel economy rating?” On both these accounts, the F-150 Lightning has the advantage. 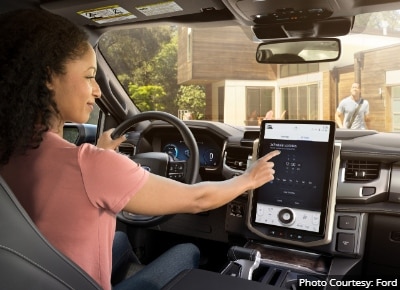 Besides the BlueCruise hands-free driving that comes standard on the F-150 Lightning but is optional on the F-150, both models in this comparison weigh in evenly for advanced safety technology such as blind spot detection with trailer tow coverage and rear cross traffic alert, roll stability control and curve control. Also, both offer optional trailer tow packages with backup assist.

The Insurance Institute for Highway Safety has given the F-150 Platinum its coveted Top Safety Pick designation. It has not yet rated the F-150 Lightning.

The Takeaway: Evenly matched for safety, both vehicles take advantage of a host of advanced safety technologies including those specific to pickup truck trailering.

One must weigh their needs here. Clearly, Ford is looking toward the future with the F-150 Lightning and has made sure that feature for feature it will satisfy its core truck-buying clients while establishing the automaker as an electric vehicle innovator.

Enabling the vehicle to offload enough power to light a home for three days may not be something a typical shopper would have had on their must-have list a year ago, but they might now.

The Lightning gets the upper hand here, particularly because of how it can accommodate the many ways we use electricity today.

Is the Lightning more powerful than the traditionally powered F-150?