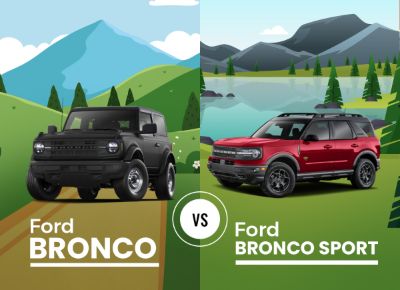 The Ford Bronco is back. One of the iconic names in SUV lore, the all-new Bronco and Bronco Sport are among the most off-road-capable vehicles on the planet.

More importantly, the product line is so broad, anyone seeking a two-row SUV with serious off-road capability should have no problem finding the right fit.

The Takeaway: The Bronco name applies to a broad line of vehicles. 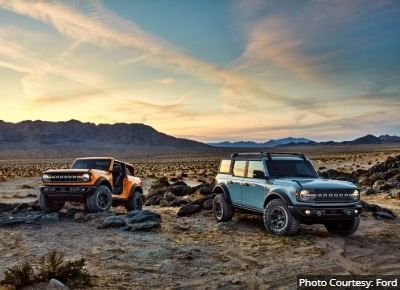 The Takeaway: If you want the “big Bronco,” the true place to start is the Bronco Sport. 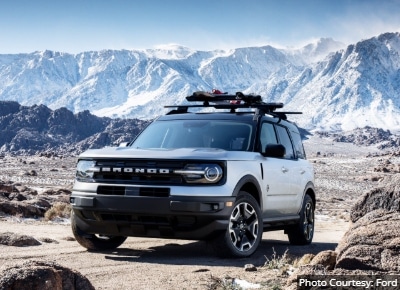 Every Bronco Sport is also a 4X4 (which we will add is actually all-wheel drive). The larger engine is accompanied by a 4X4 system with liquid-cooled PTU, disconnectable driveshaft with 4x4 lock, and dual-clutch RDU with differential lock feature. Add to that selectable drive modes such as Normal, ECO, Sport, Slippery, Mud/Ruts, Sand, Rock Crawl. Choose a trim with 29-inch tires and 8.8-inches of ground clearance, and if you can find a road this vehicle cannot handle, we will be shocked. All-terrain tires with the three-peak mountain snowflake symbol indicating the tires are snow rated are optional and standard on top trims. 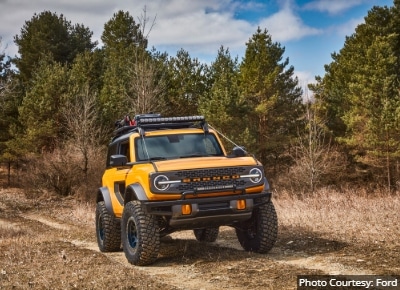 The Bronco is offered with either a 2.3-liter turbocharged four-cylinder engine or a 2.7-liter V6 turbocharged engine. With a maximum 415 lb-ft of torque available, the Bronco pulls like a train. A seven-speed manual transmission is available with the four-banger, and a 10-speed geared auto is available and standard with the V6. We tested the 2.7-liter V6, and it felt powerful and exciting to drive in all situations.

The Bronco offers two 4X4 setups. Forgive us if we crib a bit from Ford’s technical specs page so as not to miss any details. Advanced four-wheel-drive technologies are the core of the Bronco’s off-road capabilities. At the heart of it all is the Terrain Management System with G.O.A.T. Modes, designed to help drivers better navigate any type of terrain. There are seven driver-selectable modes are offered, including Normal, Eco, Sport, Slippery and Sand, with Baja, Mud/Ruts, and Rock Crawl for off-road driving.

Two 4x4 systems are offered. The “base” system uses a two-speed electronic shift-on-the-fly transfer case, and an optional advanced system that features a two-speed electromechanical transfer case with an auto mode for on-demand engagement to select between 2H and 4H. Power is distributed to a Dana 44 AdvanTEK solid rear axle and Dana AdvanTEK independent front differential unit – both with available Spicer Performa-TraK electronic locking differentials for improved traction over rough terrain in models equipped for maximum capability.

The Takeaway: Ford offers powerful and torquey engines with real geared transmissions. If you want a manual, the Bronco is the choice, but you can’t get it with the most powerful engine. 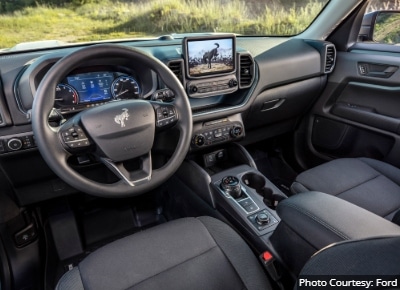 We found the infotainment systems in both the Bronco and Bronco Sport to be very simple to operate. Both feature Android Auto and Apple Car Play capability, and both use touch screens.

We really liked how Ford used the top of the dash to neatly arrange the many off-road buttons in the Bronco.

This seemed much more intuitive than the Wrangler’s mess of levers, pulleys, and buttons. That said, Wrangler owners love learning how to make the systems work.

Don’t be surprised when we tell you that the Bronco Sport has earned the very highest safety rating possible in America, the IIHS Top Safety Pick Plus designation.

Ford knows how to make safe vehicles, and the Bronco Sport aced every single test. The Bronco has not been tested yet.

The Takeaway: Ford’s Bronco Sport is among the most highly-rated SUVs for safety available.

Bronco Sport vs. Bronco - Our Way Of Seeing These Two Great Vehicles 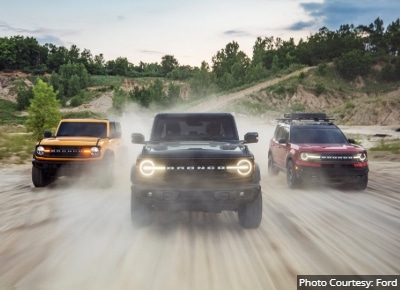 During our testing of both the Bronco and Bronco Sport, we came to regard them as different vehicles with a lot of overlapping capabilities. The Bronco Sport would be our hands-down choice if most of our driving was to be done on-road. There is simply no “Road” on which the Bronco could top the Bronco Sport.

On the other hand, if we were buying a recreational vehicle to use primarily off-road, the Bronco is a choice. And in our opinion, the two-door Bronco makes the most sense. In the Northeast, off-road areas have trees and obstacles you may want to steer among and in between. Unless your off-road trail is hard-packed dessert, the smaller Bronco two-door seems to us to be more sensible. But if hard-packed open terrain is your preferred playground, why not a Ford Raptor? Ford offers so many choices, which is best is really a personal decision.

The Takeaway: If you want an off-road capable vehicle, Ford has many great choices.

The Bronco Sport is larger inside than the two-door Bronco and has more passenger volume than the Bronco four-door.

Does the Bronco Sport have a removable top?

No, but the Bronco two-door and Bronco four-door models do. The Bronco Sport has an optional moonroof.

Can you buy a hardtop Bronco?

Yes. The Bronco has a wide variety of hardtop and soft-top options. Fun fact: The soft-top material is made in the U.S. by Massachusetts-based Haartz Corporation.

Did the Ford Bronco Sport pass its crash test?