At first glance, one might see the Hyundai SUV lineup in a longitudinal way starting at the Venue and going across the page to the Palisade with stops along the way for the Tucson and the Santa Fe. Dig in a little deeper and one notices that there are also latitudinal differences that distinguish the models in more sublime ways than just size and price.

This is especially true with the Tucson and Santa Fe.

For these two nameplates, not only are there three distinct performance choices – internal combustion engine only, hybrid gasoline/electric and plug-in hybrid electric, but there are step ups from one to the other that differentiate them by style, features and attitude. 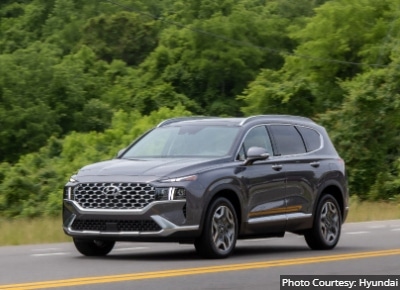 With cargo space, too, the Santa Fe PHEV has the clear advantage, providing nearly 6 cubic feet more than the Tucson PHEV when the rear seats are folded down. Granted, this is important when you need it, but not necessarily a deal breaker for those buyers who aren’t likely to use it. It does beg the question: why doesn’t the Santa Fe offer a third-row option, even if it’s just a jump seat for the kids?

The Takeaway: If size is important, then the Santa Fe will give you more in every direction. The question is: How much do you need to be comfortable or to be satisfied that the vehicle will accommodate your lifestyle? 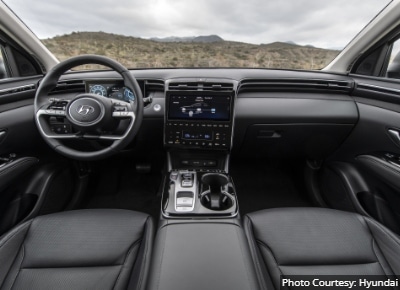 These days, one can find premium features at some level in almost any SUV. Whether it’s enough to qualify the vehicle as a premium-level model however has much more to do with the sum-total experience delivered; something more qualitative than quantitative. For the Santa Fe and Tucson, this is the crux of their differences.

As for entertainment, the Tucson PHEV Limited features a premium Bose audio system which is certainly above average, but it’s a step down from the 12-speaker Harman Kardon premium system in the Santa Fe PHEV Limited. Strangely, with both vehicles the lower trim gets wireless Android Auto and Apple CarPlay while the upper trim gets a wired connection. Wireless phone charging is standard in the Santa Fe PHEV but included only in the Tucson PHEV Limited. Lastly a key indicator of their overall qualitative difference is that the Santa Fe PHEV comes with a 12.3-inch digital gauge cluster. The best the Tucson offers is a 10.25-inch gauge display in the Limited. Meanwhile, the Tucson SEL makes do with a dated 4.2-inch cluster display and analog meters.

The Takeaway: All things are not equal inside these two models. Where the Tucson offers glimpses of a premium level experience, the Santa Fe is more earnest in this quest. 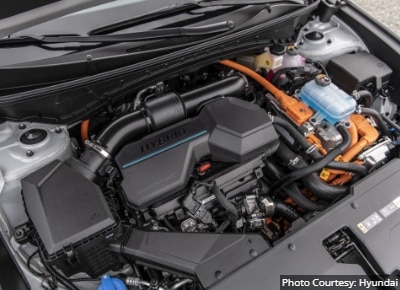 In the performance arena, these two vehicles fare somewhat equally. Both utilize a combination of a 1.6-liter gasoline engine and an electric motor to yield a net 261 horsepower. A shift-by-wire 6-speed automatic transmission paired with all-wheel drive is standard as well. Towing capacity for both maxes out at 2000 pounds with trailer brakes. Importantly, the Santa Fe PHEV comes equipped with trailer sway control that automatically engages the electronic stability control system when it senses the trailer swaying, while reducing the throttle and engaging the brakes.

Other differences are in total range, fuel economy and charging times. The Santa Fe PHEV has the longer range as indicated in the above table, but it also has a 12.4-gallon fuel tank compared with the 11.1-gallon tank in the Tucson PHEV. Of course, with the Santa Fe being the bigger SUV, its fuel economy comes in a bit lower than the Tucson. The EPA estimates that the difference amounts to the Tucson PHEV saving $100 dollars in fuel costs annually over the Santa Fe PHEV based on 15,000 miles traveled and 55% of the miles being city driving, 45% highway.

Where the Tucson PHEV noticeably edges out the Santa Fe PHEV is in the speed of its charging. For practical reasons, using a 120-volt connection takes just too much time with either vehicle, but with a 240-volt charger installed at home, charging becomes very manageable. Nevertheless, the stark difference between the Tucson PHEV taking 1.7 hours to charge while the Santa Fe takes 3.4 hours seems inexplicable since both battery systems have a 13.8-kWh capacity.

The Takeaway: There are many drivers who will manage to do most of their everyday driving primarily on electric in either the Santa Fe PHEV or the Tucson PHEV by traveling under 40 miles per day. For those drivers who want to do more all-electric driving, the Tucson would be the better choice simply for the convenience of its much faster charging time. 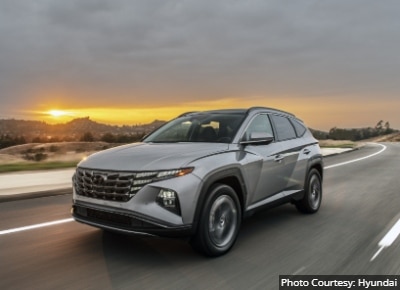 Both the 2022 Santa Fe and the 2022 Tucson have received the coveted Top Safety Pick+ recognition from the IIHS. Feature for feature, these two SUVs score high for including standard advanced safety technologies such as forward collision avoidance, blind spot detection, lane keeping assist and driver attention warning.

Where the Santa FE PHEV steps out in front is with refinements such as high beam assist, standard reverse park distance warning and the aforementioned trailer sway control.

Nevertheless, at the Limited trim level both are endowed with some remarkable new technologies including remote park assist. With this feature, one can forego squeezing in or out of the vehicle in a tight parking spot by simply using the smart key buttons to move the vehicle forward or back while standing outside.

The Takeaway: With an armory full of safety technologies, the Hyundai Santa Fe PHEV and Tucson PHEV both provide an exceptionally safe driving environment. Choosing one over the other based on safety should only hinge on whether one often hitches up a trailer.

So, Which Is Better – the Santa Fe PHEV or the Tucson PHEV?

Hyundai has created these two vehicles with different buyers in mind. For those who see their SUV as nothing more than a five-passenger transporter, then the Tucson PHEV will more than meet your expectations.

If one needs a bit more elegance and refinement, then stick with the Santa Fe PHEV.

Which has more features, the Santa Fe PHEV or the Tucson PHEV?

These vehicles are priced differently yet mostly offer comparable features. However, the Santa Fe PHEV is not only larger, but also designed to occupy more of the premium space in the SUV market than the Tucson.

Are PHEVs worth the extra money one pays over their traditionally powered counterparts?

Over time, yes, they are. Besides reducing carbon emissions, a PHEV will save enough in fuel costs over its lifetime to more than cover the difference in initial price. Plus, there may be tax incentives that will offset the cost.