Acura RDX vs Acura MDX: Which Is the Better Acura SUV? 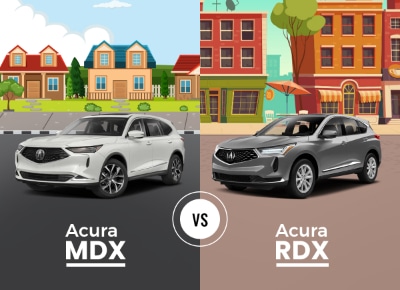 Making a purchase decision between Acura’s RDX and MDX models is as much a lifestyle choice as it is a judgment call on what it means to be practical.

Each of these two vehicles exudes style and attitude while offering a competitive range of features, yet they present stark differences in performance, size, and function.

Will it be the fuel economy of the RDX or the power of the MDX? That’s just one of the many questions to be answered as we compare these two SUVs. 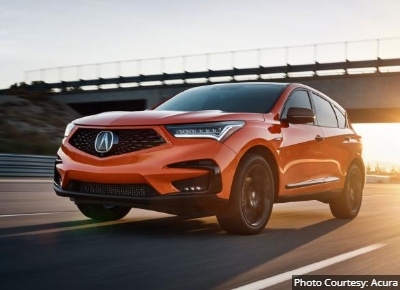 Clearly, size and passenger capacity are significant differentiators for these two SUVs. Where the RDX is designed as a two-row, five-passenger vehicle, the MDX is larger in all exterior dimensions and seats seven occupants in three rows.

However, for tall drivers, the RDX will prove marginally more hospitable with its headroom and legroom, while second-row passengers in either model enjoy nearly equal headroom but a bit more legroom in the MDX. Even so, the seating in the first two rows of the MDX generally feels more comfortable by virtue of its considerable amount of hip and shoulder room.

In looking at overall passenger space and maximum cargo volume, it’s evident that the RDX is not trying to compete with its stablemate. When loaded with a full complement of passengers, the 5-passenger RDX retains a very convenient 29.5 cubic feet of cargo space available behind the rear seat, while the MDX laden with 7 passengers leaves just 18.1 cubic feet. Nevertheless, if the 2-passenger third row of the MDX is dropped out of the way, cargo space improves to 48.4 cubic feet.

One final point on measurements: the MDX is definitively a more capable utility vehicle. Weekend adventurers with an RV will appreciate that its trailering limit tops out at 5,000 pounds with AWD models. That’s 3,500 pounds more than the RDX can handle.

The Takeaway: If you plan to carry half the school soccer team to practice every day, shop for antique furniture on weekends, and occasionally haul a camper to a woodland hideaway, the MDX has you covered. On the other hand, if you have a young family and a long commute every day, the RDX might be a better choice. It’s smaller, lighter and gets in and out of parking spaces more easily. 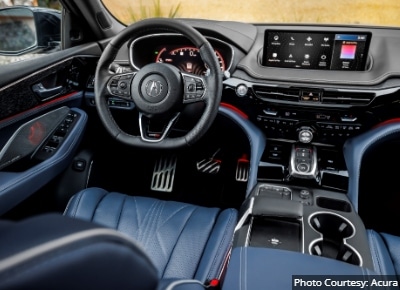 With Acura being the premium branch of the Honda family, both RDX and MDX models present a decidedly up-market appearance. The current generation RDX debuted in 2019, notably with a more driver-focused interior. For 2022, the model has gained important refinements including an enhanced active sound control system that improves cabin quietness by reducing road noise. Meanwhile, an all-new 4th-generation MDX was launched in 2022 after a one-year hiatus for the model.

In both models, all except the entry-level, feature a GPS-linked climate control system that measures the sun’s intensity and tracks the sun’s position relative to the vehicle to determine its effect on internal temperature.

Driver controls generally mimic each other in both models, but the ventilation layout and dashboard design in the RDX aims for a sporty look whereas the MDX goes for sophistication. Premium audio is standard with up to 16 speakers depending on package choice. A-Spec and Type S packages as well as the hand-crafted limited edition RDX PMC feature a flat-bottom steering wheel. The most obvious technology gap is that the MDX gets a visually stunning 12.3-inch digital instrument cluster screen as well as a 12.3-inch center display, whereas the RDX settles with a 7-inch cluster screen and a 10.2-inch center display.

The Takeaway: While neither model could be called for slouching on creature comforts or plush styling, the MDX, having the advantage of a total redesign, comes out on top. But this is to be expected with it having to flaunt its flagship status. 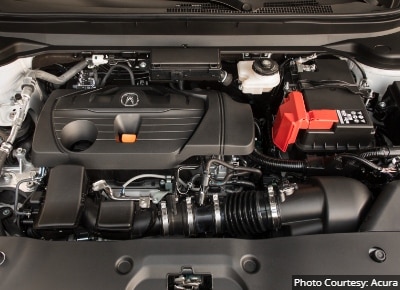 Obviously, the term “sports car” doesn’t immediately come to mind with either the RDX or the MDX. On closer inspection, though, one could seriously consider the MDX Type S editions as contenders for that moniker. Fitted with a 355-horsepower twin-scroll turbo 3-liter V6, the Type S boasts a superbly robust 354 lb-ft of torque that kicks in at a very low 1,400 rpm and sustains that performance out to 5,000 rpm.

All other MDX editions utilize a naturally aspirated 3.5-liter V6 making 290 horsepower, which falls in just ahead of the RDX’s 272-horsepower turbo 2-liter inline-four. A 10-speed automatic transmission is standard across both lineups. Lower trims offer front-wheel drive as standard, while all editions list Acura’s Super Handling all-wheel drive on their spec sheets as either available or standard.

Interestingly, the RDX offers 8.2 inches of ground clearance, nearly an inch more than all MDX trims except the Type S which has an adaptive air suspension that can raise ground clearance from 6.7 inches to 9.4 inches. This shouldn’t be overlooked when figuring out what’s best for one’s needs. For off-road travelers who are likely to encounter deeply rutted roads, winter warriors laying fresh tracks in the snow, or beachgoers who find themselves traversing stretches of sand, both the RDX or the MDX Type S may prove their worth with more clearance and better approach and departure angles.

The Takeaway: In terms of sporty handling, the RDX with AWD gets the nod. There’s just more agility and quickness about it. The bull here however is the MDX Type S. There’s no getting around its power and persuasion. Plus, it sits at the top when encountering snow, sand, mud and rocks. But if fuel economy is one’s primary goal, the RDX is a better choice. 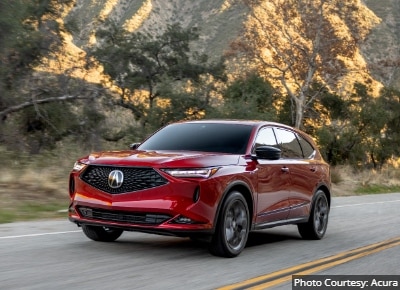 Acura has put a couple of feathers in its cap with both the RDX and MDX earning 2022 Top Safety Pick+ designations from the Insurance Institute for Highway Safety. It’s not surprising even if one considered only the high level of advanced safety technology built into each model.

If you haven’t purchased a vehicle in a while, you’ll quickly come to appreciate how amazingly helpful these technological features can be at preventing accidents.

The Takeaway: The RDX and the MDX fare equally well on the safety front not only for having safety engineered into their architecture, but also for taking advantage of the wealth of critical safety technology that is becoming more readily available. Even so, it seems peculiar that neither model’s entry level provides front and rear parking sensors. It’s only available in the add-on packages.

You may qualify for additional deals and incentives, check out this month's Acura deals and average prices paid.

You may qualify for additional deals and incentives, check out this month's Acura deals and average prices paid.

So Which Is Better - The Acura RDX or the Acura MDX?

Better is not the comparative word to use to describe how different these vehicles are. If one seeks a sporty vehicle that is both efficient and practical, then the RDX might be more satisfying.

However, if you have the need for a vehicle that can transport up to seven people and haul a trailer or boat, then the MDX is the answer.

Which has been updated the most recently, the RDX or the MDX?

The current generation of the RDX first appeared for the 2019 model year, while the current generation MDX came out in 2021 for the 2022 model year. Nevertheless, the RDX benefits from numerous improvements for 2022 including exterior enhancements inspired by the flagship MDX, better road noise control, upgraded dynamics to give the four drive modes more distinction, and retuned dampers to enhance response in Sport mode and ride comfortability in Comfort mode.

What are similar models to the Acura RDX?

Dollar for dollar and feature for feature, the competitors that best face off with the RDX include the Lexus RX, the Infiniti QX50, the Volvo XC60, the Lincoln Corsair, and the Cadillac XT5.

Is the Acura MDX more powerful than the RDX?

Yes, especially with the Type S and Type S Advance packages that deliver a robust 355 horsepower. However, compared at their entry levels, the RDX delivers more torque uniformly better and has nearly as much horsepower as the MDX.