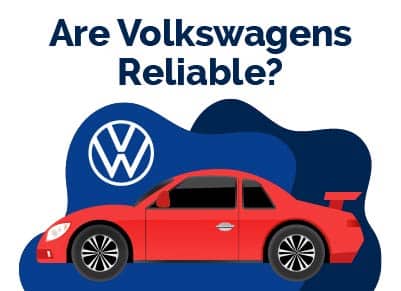 The Volkswagen (VW) brand is an old name in the automobile industry, dating back to 1937. At the mention of Volkswagen, everyone remembers the hunch-backed car with a boxer engine.

The Volkswagen Beetle car grew from just an idea from Adolf Hitler and Ferdinand Porsche to becoming a globally recognized car – the landmark of the brand’s success.

Enough of the stories. Are Volkswagens reliable?

With a Volkswagen car, you get a powerful engine, great gas mileage, and a durable car frame that can last till the end of time. Although the Volkswagen brand has been in the news for its emissions scandal, there are a few good things about it.

Let’s explore all you need to know about Volkswagen’s reliability.

Volkswagen cars are fairly reliable. The Volkswagen brand is the second largest automaker in the world, following closely behind Toyota. However, the VW brand has fallen in its production strength and deliveries in the past few years.

Many reasons contributed to Volkswagen’s drop in reliability, one of which is its high repair and maintenance costs. In most cases, the Volkswagen spare parts are unavailable in the country.

The cost of maintaining a Volkswagen car makes them a burdensome adventure because you might find it hard to sustain ownership after the warranty expires.

There are quite a few reliable advantages of owning a Volkswagen car. The designs might not be appealing or attractive, but they are durable. You will get a great level of reliability from their TDI engines.

But, on reliability survey sites like JD Power and Consumer Reports, the Volkswagen brand has battled between maintaining the average position and going below it. This has been since 2008. RepairPal believes Volkswagen is a brand that is worth giving a try.

Volkswagen has a reliability rating of 3.5/5.0, ranking 12th out of 32 car brands. But, when it comes to deciding if Volkswagen is a reliable car or not, many users have different things to say.

In Germany and Europe, Volkswagen is perceived as a reliable brand. This is unlike in the US, where they are not only perceived as unreliable, but their sales have reduced drastically since 2016.

There are quite a few good things about Volkswagen cars; they retain value, have solid designs, and have high safety ratings. Volkswagen cars are good on fuel. You can rely on some of their models for reduced gas consumption.

Why Volkswagens Are Considered Fairly Reliable

One of the good things about Volkswagen cars is their fuel economy. There is no improved fuel conservation technology in Volkswagen cars, as we can find in Honda and Mazda cars.

Some Volkswagen cars are designed to deliver an impressive level of gas mileage. You can get up to 43 MPG on the 2022 Volkswagen Jetta and 37 MPG on the 2019 Volkswagen Golf. Many drivers resort to the VW Golf models for their fuel efficiency.

Check your driving habit if you notice that your Volkswagen car is burning too much gas. You might be driving too fast.

Volkswagen achieves its fuel efficiency from the type of engines that it loads up its cars with. This causes varying gas mileage across all models.

If you want a highly reliable and fuel-efficient Volkswagen car, you should choose the all-electric Volkswagen ID.4, with a 201 to 295 hp powered by an 82KWh battery that can run up to 280 miles per charge. There’s also the Volkswagen Passat with gas mileage of 24mpg city and 36mpg highway.

Volkswagen broke into the league of reliable cars by producing durable cars. Cars that can last up to 200,000 miles.

We might not see the legendary Volkswagen beetle on the road, but some of these cars are still available in our garages and farms. With minor damage to the painting and seats, even after long years.

The Volkswagen group adopts the famous German engineering process to ensure the durability of its cars. This is commendable, but there is a need for improvements as some Volkswagen cars become problematic after three or four years of use.

In some cases, these problems start with rust and metal corrosion. Users can rely on the Volkswagen 12 years rust protection warranty.

The biggest perk about buying a Volkswagen car is its cheapness. The downside of these cars is that the average cost of repair and maintenance is not as cheap as it should be.

It costs an annual average of $676 to repair/maintain your Volkswagen car. This is because most of their parts are difficult to get.

The Volkswagen brand is good at producing durable engines with amazing performance. Volkswagen is not only known for good engines but also the pioneer of lots of innovative engine technology.

They introduced the use of air-cooled engines. This is a technology that was replicated in Porsche.

You can expect a great level of reliability from the Volkswagen 1.8L engine. Volkswagen engines were initially used in military cars, so they are expected to last as long as 100,000 miles with little or no major repairs.

There are no arguments that Volkswagen is a safe car. US News placed Volkswagen on a 9.5/10 safety rating. This includes their high safety ratings on IIHS, NHTSA, and Euro NCAP/ANCAP.

Despite how strongly built the Volkswagen brand is, you’re likely to encounter a few problems in your third or fifth year of driving it. However, these problems will likely arise depending on your driving conditions and maintenance habits. Some of the problems associated with Volkswagens are:

Volkswagen is a fairly reliable brand, but its reliability is unstable. They are fun to drive, have enjoyable rides, pleasant steering performance, and gas mileage that you can depend on.

You must be careful about your choices to ensure that your preferred model isn’t problematic.

How long do Volkswagens usually last?

Why do Volkswagens leak oil?

Many reasons are attributed to the oil leakage in your Volkswagen. Some are influenced by natural factors, especially if your car’s parts are less durable. In some other cases, Volkswagen oil leakage is caused by external factors.

Are Volkswagen cheap to repair?

Yes. Volkswagens are cheap to repair. The average annual cost of repairing and maintaining a Volkswagen is $676, a little bit higher than the industry average of $652. Repair and maintenance cost varies across all models.