Toyota C-HR vs Honda HR-V: Which Is a Better Value? 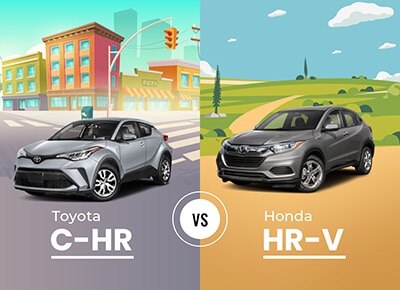 Toyota and Honda have been going at it nearly as long as Ford and Chevrolet. The rivalry is not so much about sports cars, though. Instead, these two heavyweights throw down in the commuter-car arena.

The most affordable match-up? The Toyota C-HR and the Honda HR-V.

These two subcompact crossovers share a small price tag, a target market, and modest four-cylinder power, but otherwise, they couldn’t be more different. Honda has merely aimed for practicality in a pint-sized package; Toyota tries to spice things up with rather extravagant styling.

We’ve lined these two competitors up side by side to see who comes up on top. Is this a KO or a draw? 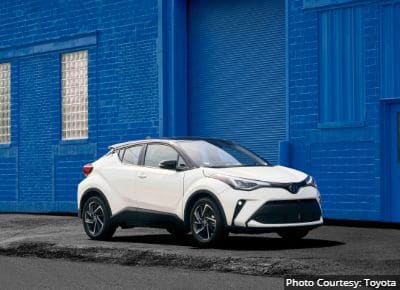 Only a few hair widths separate the HR-V and C-HR dimensionally, but despite the small differences, the overall results are dramatic. Let’s start with the Toyota, which is the bigger of the two. It measures 173 inches long on a 103.9-inch wheelbase. Between the mirrors, there’s a 71-inch span, and 61 inches separate the pavement from the roof.

From the numbers, the Honda looks like it may be at a slight disadvantage, but in reality, the Toyota’s extra inches here and there all come down to its unconventional styling. Clearly, the Toyota designers wanted to leave a lasting impression: the C-HR’s aggressively raked roofline, a taut, squatting back end, and a bold front end will turn heads.

Whether those heads are turned in admiration or disgust is another matter, but suffice to say that the Toyota has followed the adage of longer, lower, and wider to such an extent that the C-HR could be thought of as a hatchback. The more upright, stodgier HR-V sticks with the traditional crossover shape for a slightly more compact footprint. 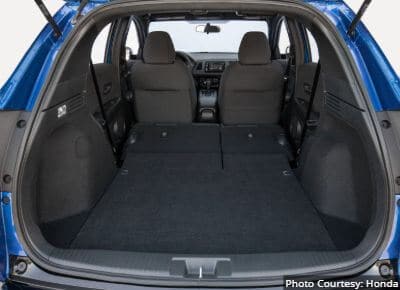 The C-HR’s styling lends no benefit to interior dimensions. The cargo area and back seat are the most significantly impacted: the hatch can only hold 19 cubic feet, while rear passengers must endure just 31 inches of legroom. Compare these figures to that of the HR-V, which has 24 cubic feet of cargo space and 39 inches of rear legroom. Winner: Honda.

Folding down the rear seat doesn’t help the Toyota’s case. The C-HR manages a grand total of 37 cubic feet of cargo space; the Honda will hold 59 cubic feet of stuff. This not only points to Honda’s famously excellent space utilization – not many crossovers of this size will hold nearly 60 cubes of cargo – but also to the severe sacrifice in practicality demanded by the Toyota’s racy roofline. The C-HR is among the smallest, tightest subcompact crossovers on the market.

Riding in the back seat confirms this. The low roof threatens to knock the hats off passengers of any size, and scalps of tall passengers will inevitably be grazing the headliner. Once you’ve navigated through the tight door aperture and settled into your seat, the dark interior combined with the porthole of a side window lends a certain claustrophobia to the experience. There are third-row seats that feel airier than the back of the C-HR.

The HR-V doesn’t have that issue. Its taller roofline and lack of rearward slope allow for better headroom and the use of larger windows, the latter of which provides the rider with more natural light and a more comfortable, pleasant experience. The Honda’s better interior quality doesn’t hurt, either. Back row or front, the HR-V feels like it uses higher-grade materials than the C-HR. Neither approaches luxury-car territory, though. 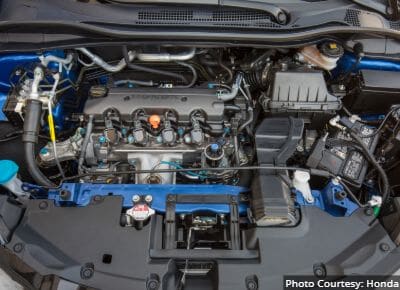 Both crossovers use simple four-cylinder powertrains that elicit no thrills and no excitement. There are no performance packages or optional, high-output turbo engines. Both crossovers prioritize economy and practicality using the tried-and-true methods.

For the Honda, that means a 1.8-liter four-cylinder paired up to a CVT transmission for a total output of 141 horsepower and 127 lb-ft of torque. Front-wheel drive is standard, and all-wheel drive is optional.

The Toyota engine measures 2.0 liters, but the extra displacement doesn’t amount to much additional power. 144 horsepower and 139 lb-ft of torque get routed exclusively to the front wheels via a CVT.

Considering the recent strides in fuel efficiency among all vehicles, the EPA ratings of both crossovers don’t impress us. The thriftier of the two is the H-RV, which will return 28 mpg city, 34 highway, and 30 combined. The Toyota comes in at a lackluster 27/31/29 mpg.

Because both engines eschew turbos, acceleration is slow. The Toyota C-HR, in fact, is one of the slowest new cars on the market, with a 0-60 mph sprint taking longer than ten seconds. The H-RV isn’t much quicker, but at least it can do the deed before the timer exceeds single digits. 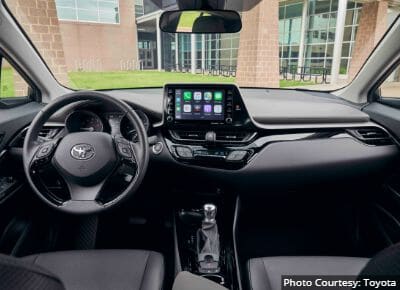 Neither crossover boasts a particularly impressive features list. We’re not surprised; considering their price point, there really isn’t the expectation these vehicles should be decked out like luxury cars. Both deliver the features customers now commonly expect.

Hopefully, Honda was taking notes because the HR-V doesn’t offer any of the aforementioned equipment as standard. Instead, a base model is limited to a 5.0-inch touchscreen, four-speaker audio, and Bluetooth. There’s no Apple CarPlay or Android Auto, which is only included with the larger 7.0-inch touchscreen found on the higher trims.

At the top of the pecking order, both models offer leather upholstery, heated front seats, and a power driver’s seat. 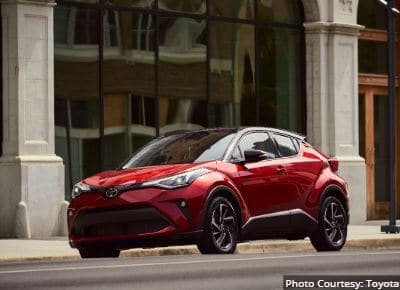 We have to hand it to Toyota: they’ve outdone themselves on the comprehensive list of standard active-safety features included with the C-HR. Every trim receives automatic emergency braking, adaptive cruise control, lane-keep assist, and lane-departure warning. There’s also automatic high beams, road-sign assist, and – novel in this segment – a rearview camera.

The HR-V isn’t exactly stingy on safety features, but they can’t boast as long a feature count as Toyota. You won’t find an HR-V anywhere with a factory rearview camera or road-sign assist, regardless of trim.  Blind-spot monitoring and rear-cross traffic alert are available on both models, however.

Crash-test results have been promising, with the government and the IIHS issuing their highest ratings across their battery of tests for both crossovers. 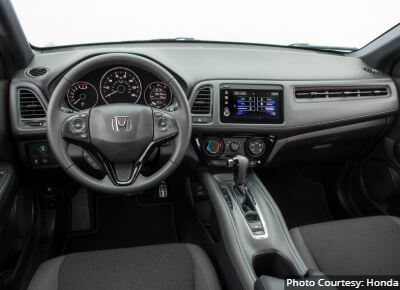 Before calling the cheaper Honda the best value, consider that the Toyota has the more comprehensive list of standard features, both from an amenities perspective as well as a safety perspective. Tit-for-tat, the Toyota is more generous when it comes to stuffing the low-trim C-HRs with content. That gives it a more favorable features-per-dollar ratio than the HR-V, despite that model being a hair cheaper.

Which Is Better, the Toyota C-HR or Honda HR-V?

The HR-V is clearly the more practical choice here. Not only does it offer nearly double the total cargo space – it also has a more livable back seat, a nicer interior, and better gas mileage.

Even though the Toyota trumps the Honda on base-model feature content, the Honda proves itself as the better car to live with day-to-day.

It’s the one we’d spend our money on – though we’d make sure to buy a model with the 7.0-inch touchscreen.

What’s comparable to a Toyota C-HR or Honda HR-V?

Other models that go against the two Japanese rivals include the Nissan Kicks, Mazda CX-30, Chevrolet Trailblazer, and Ford EcoSport.

Is the C-HR a hatchback or crossover?

Toyota likes to call it a crossover – but technically, it’s a hatchback, especially as it doesn’t even offer all-wheel drive. With less than six inches of ground clearance, we don’t recommend tackling any terrain more serious than a well-groomed dirt road.

Which is better, the Toyota C-HR or Toyota Corolla?

In our eyes, the Corolla all the way. As a proper sedan (or hatchback), it offers a more engaging driving experience and a much more spacious interior. It is also more efficient, more affordable, and faster. Add in its more classically handsome looks, and we’re sold.

Which one is bigger, the Toyota C-HR or Honda HR-V?

Which one is safer, the Toyota C-HR or Honda HR-V?

We have to hand it to Toyota: they’ve outdone themselves on the comprehensive list of standard active-safety features included with the C-HR. The HR-V isn’t exactly stingy on safety features, but they can’t boast as long a feature count as Toyota.

What’s the difference between the Honda HR-V and Honda CR-V?

The CR-V is the HR-V’s bigger brother, featuring more space, more features, and the commensurate higher price tag. We have a whole article dissecting the differences between these two crossovers here.