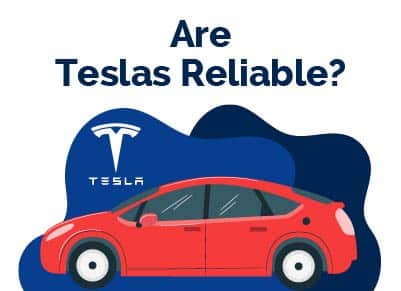 There’s so much hype about Tesla cars. Facebook reels, TikTok videos, and across different social media platforms, you won’t scroll past three timelines without seeing a Tesla owner flaunting their cars. Amidst the whole news about Tesla cars, are Teslas reliable, or are they just some overhyped pieces of junk?

With the innovative ideas tied up to the Elon Musk brand, it is normal to demand a decent level of reliability from Tesla cars. Unfortunately, the reverse is the case. Tesla is a less reliable car brand.

The Tesla brand is still a new baby in the auto industry, so there isn’t much data for reliability surveys to judge their reliability. However, a 2021 JD Power survey ranked Tesla among some of the most unreliable cars.

The best way to judge Tesla’s reliability is from the experience of someone that drives or has driven the car. From our brief experience, we can confirm that Tesla cars break down a lot and the maintenance cost for Tesla cars is not cheap.

Read on to find out more about Tesla’s reliability.

The answer is simple; Teslas are less reliable. JD Power’s 2021 dependability survey shows that Tesla is ranked 30th out of 33 car brands. This is closely related to the reliability rating from Consumer reports as they rank Tesla 27th out of 28 brands.

We might not be quick to tag them. It’s a new brand with room for upgrades and improvements. However, the truth remains that Tesla cars are not in any way reliable.

From the collective experience of users who own and drive Tesla cars, using the Tesla Model S as a reference, these cars are usually problematic. With close to 40,000 miles on it, the car had more than seven major breakdowns.

This ranges from the need to replace the battery, safety recalls, and an unusual breakdown of the car in the middle of the road. For a car that was just driven for two years, it is alarming to experience multiple issues on it.

In one of the scenarios, it was impossible to put the car in gear, with no other option than to tow it back to the service shop. Although Tesla incorporates a diagnostic system on its cars for users to reset the system, these issues are unnecessary for a new car.

When you analyze the number of repairs, cost of maintenance, and failures of Tesla cars, you’ll discover that they are nowhere close to being reliable.

The failing standard of Tesla cars makes it look like the company releases a few untested models to the market to get real-time data from users’ experience with these problematic cars.

No matter how flashy and attractive Tesla cars are, the tech supports, and the echoes for next-generation self-driving systems, there are still worries about the long-term durability of Tesla cars.

Between 2016 to 2019, Tesla was forced to recall many of its cars for door-related issues, gear issues, brakes, and even airbag problems.

The Tesla brand promised to fix these issues and improve its cars during and after the recalls. The Tesla brand is making great improvements in the reliability of its car. They have a few cars with impressive safety ratings, earning the IIHS Top Safety Pick+ award.

Why Teslas Are Considered Less Reliable

It is expensive to repair and maintain a Tesla car. According to RepairPal, the annual average cost of repairing a Tesla car is $852. This is higher than the average annual $652 for all car models.

While it is normal to believe that the cost of maintaining/repairing a Tesla car is more than this, we must remind you that as a Tesla owner, you are entitled to some levels of vehicle warranty. The warranty of Tesla cars varies across different models.

Here’s a rundown of the kind of warranty that you will get with Tesla:

It is important to note that Tesla doesn’t have a lifetime warranty.

Most Tesla cars battle 12V battery replacement issues, door handle fixes, and brake changes. This includes worn CV joints in just a few years of extensive use. Although the warranty covers these replacements, it exposes deep flaws in the long-term durability of Tesla cars.

Until Tesla cars can last more than 3 to 4 years without multiple problems, their long-term durability will always be questioned.

How Is Tesla’s Reliability Improving?

One of the few things Tesla does that gives us hope in their reliability is the way they show concern for all customer issues. The brand is solely committed to fixing any arising flaw. This is visible in the massive improvements in their cars after the recalls.

When a customer reports an issue to any of the Tesla service centers, Tesla ensures that it provides a tech team to rectify the issue. Sometimes, it takes a long time to get the car running again, but the improvements are noticeable.

One of the good things about Tesla cars is their safety technology and infotainment. Tesla remains one of the car brands that has perfected the self-driving technology in its cars. The Tesla Autopilot achieves smooth drive autonomy without worries.

All Tesla cars are fitted with self-driving kits with an advanced navigation system for improved safety and efficiency.

Here’s a list of safety features that Tesla has:

Despite the sleek and high-tech features of Tesla cars, they still have their defects. Some of the problems associated with Tesla cars are:

Buying a Tesla looks fanciful, but you might have to apply some patience. Give the company enough time to perfect its production and engineering designs.

Tesla is doing a great job, trying to match customers’ demands and growing to become the safest car in the world. So far, it is just a work in progress, but there are high hopes that Tesla cars will become reliable with fewer problems and a cost-effective maintenance solution.

How expensive is maintenance on a Tesla?

Tesla is a brand known for producing electric vehicles with sleek designs and advanced tech features. Tesla’s repair and maintenance costs are very expensive. It costs an annual average of $832 to maintain a Tesla car.

How long do Tesla batteries last?

Tesla cars make use of lithium-ion batteries. Your Tesla battery can last between 250,000 to 500,000 miles or 20 to 35 years. Your driving style/habits, weather conditions, and driving temperatures are some factors that affect your Tesla battery's longevity.