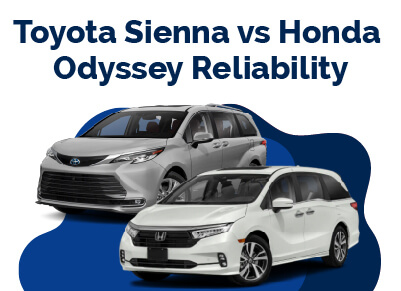 Even though crossovers are becoming more popular, minivans remain a must-have for anyone who wants to carry a lot of people and cargo.

The Toyota Sienna and the Honda Odyssey are among the most popular models on the market, and they both have plenty of features that make life easier for the whole family.

Although both of these car models have plenty of features, they also have distinct attributes that can make them a better choice for you.

This article will help you make an informed decision about choosing a new minivan, comparing Sienna vs. Odyssey reliability, features, and other important facts about these vehicles.

It's no surprise that the Honda Odyssey and Toyota Sienna earned five-star ratings from the government regarding crash tests.

The former performed well in front and side crashes, while the latter scored well in the rollover assessment.

The Honda Odyssey was named one of the Top Safety Picks by the Insurance Institute For Highway Safety. It received good ratings in all of the crash tests.

Toyota's 2019 model, the Toyota Sienna, didn't receive an award. Although it scored well in most categories, it received an "Acceptable" rating in the small overlap front test, which simulates what would happen if a car hits an object at 40 mph.

It also received a lower score on the passenger-side test, which replicates the same scenario but tests the front right corner of the vehicle.

Toyota's standard safety features are more extensive than those offered by Honda. The 2019 Toyota Sienna has various standard features, such as pre-collision braking, adaptive cruise control, and steering assist.

On the other hand, the 2019 Honda Odyssey doesn't come with these features. It features collision mitigation braking, adaptive cruise control, and road departure mitigation.

You'll have to upgrade to the EX trim to get the most out of the Honda Sensing suite.

Although you're not buying a minivan based on its performance, handling and acceleration are still factors you should consider.

The Toyota Sienna is equipped with all-wheel drive, which may be the better choice if you're looking for more traction in bad weather.

The smooth ride and handling of the Honda Odyssey are well-known, and it's also equipped with a 10-speed automatic transmission.

However, we've found the Sienna Limited model's steering effort excessive at low speeds. The SE model of the Toyota has a more firm suspension, which is less compliant.

Despite the higher output, the 2019 Toyota Sienna is still slower than the Honda Odyssey. The Honda Odyssey has a 3.5-liter V-6 engine that produces 280 horsepower and 262 lb-ft of torque.

This makes it quicker than Toyota's model, which we've tested at a speed of 7.1 seconds.

Although both minivans have plenty of room for passengers in the second and third rows, the Honda Odyssey has more legroom than the Toyota model.

The Odyssey also has more legroom in the second and third rows, with 40.9 and 38.1 inches, respectively.

If you're planning on taking out the second-row center seat, you'll have to keep it home. The Toyota's seats slide forward and back to make it easier to exit and enter the vehicle.

However, the Honda Odyssey's second-row seats can be moved forward and back, and they can also be stored in the rear storage area.

The passenger volume of both minivans is close to equal. The Honda Odyssey has 163.6 cubic feet of space for its passengers, while the Toyota model has 164.4 cubic feet.

Our tests revealed that the second-row seats in the 2019 Honda Odyssey and 2019 Toyota Sienna are comfortable.

The interior of both minivans is modern. The Honda Odyssey is equipped with a standard 8-inch central touchscreen, while the Toyota's model gets a 7-inch display.

The Honda Odyssey and Toyota models feature push-button start and gear-shifting capabilities. Both also come with high-quality materials in their upper trim levels.

One minor complaint about the Toyota is that its cupholders are not large enough.

The Honda Odyssey comes with several unique features that the Toyota doesn't. One of these is CabinWatch, which allows you to monitor your kids in the rear with the help of a touchscreen.

It's also equipped with CabinTalk, which enables you to talk to them using Bluetooth headphones or the rear speakers.

The Odyssey Touring and the top-of-the-line Odyssey Elite also feature an integrated vacuum.

The 2019 Toyota Sienna comes with an Auto Access seat that can assist passengers who need to exit and board the vehicle. It automatically lowers and turns back into position once they're inside the car.

The Honda Odyssey and the Toyota models have rear-seat entertainment systems that can keep the kids entertained. These features can be found in the upper trim levels of both minivans.

The reliability of a vehicle is measured by the JD Power Initial Quality Study, conducted for the first 90 days. The 2019 Kia Sedona had the fewest problems during the survey period.

The other winner in the minivan category was the 2019 Dodge Grand Caravan. The Honda Odyssey came in fourth, while the Toyota was in third.

The Sienna has a 2.5L 4-cylinder engine capable of producing 245 horsepower, while the Odyssey has a 3.5L V6 engine that produces 244 horsepower.

The Sienna does 36 cities and 36 highway MPG while the Odyssey does 19 mpg city/28 mpg highway.

The Odyssey costs $547 for repairs and maintenance yearly, and the Sienna costs approximately $554.

If you're looking for a minivan equipped with all-wheel drive, the Toyota's 2019 Toyota Sienna is the best choice.

However, the Honda Odyssey is a better choice if you're a base model. The Odyssey is ahead of the Toyota in various categories, such as rear legroom and fuel economy.

Why Is Odyssey Better Than Sienna?

Although they share many similarities, the two differ in their overall shape and features. For instance, the Odyssey doesn't offer all-wheel drive, but it has other advantages, such as a more refined engine and a nicer interior.

Is Toyota Sienna a Reliable Car?

Based on the data collected from 2019 to 2021 models, the Honda Odyssey is expected to have an average reliability score of around 74 out of a possible 100.

Which Minivan Lasts the Longest?

The Honda Odyssey is considered the longest-lasting minivan, while the Toyota Sienna is close behind. Both of these models are capable of carrying over 200,000 miles.

Is Odyssey Bigger Than Sienna?

Measuring about 68 inches tall, the Honda Odyssey is slightly longer than the Toyota Sienna. On the other hand, the latter is 79 inches wide and 205 inches long.