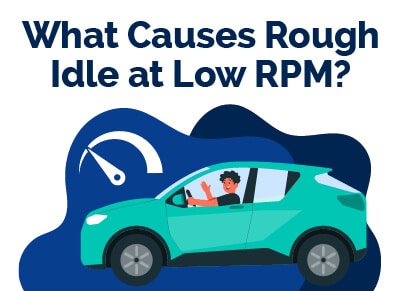 A rough idle can indicate that something is wrong with your car. Several signs can show up when it comes to having an idle issue, including inconsistent or jumping RPMs, shaking or wrenching during idle, and inconsistent or flat sounds.

But what causes rough idle at low RPM?

However, it is vital to cite that this issue could be caused by something more severe than just the car itself.

If the vehicle feels bouncy while idle or its RPMs are inconsistent, it's time to take it to a mechanic.

The article highlights some of the common causes of rough idle at low rpm and how to tackle these issues!

What is a Rough Idle?

A rough idle is similar to a regular idle, except that it's not as smooth as you might expect from modern engines.

If you feel like your car is rough when it idles, it's because of a change in the amount of air going to your engine.

This is usually caused by various factors, such as the regularity of your ignition and the vacuum lines.

What causes rough idle at low RPM? The various defective components responsible will be listed below.

A wide variety of electronic components and systems can cause a rough idle.

This can be a frustrating issue to diagnose, especially if you're unsure where to look.

Having an experienced mechanic inspect your car can help prevent it from happening in the first place.

The fuel injection system is essential to your vehicle's starting system. It provides the necessary mixture of air and fuel to the cylinders.

If your injectors are gummed up or not working correctly, this can cause a rough idle or slow acceleration.

You can suspect the injector is the culprit when there's an inconsistent or rough start or lack of power when trying to accelerate.

A fuel pump is responsible for providing the necessary amount of fuel to the vehicle's cylinders.

Over time, it becomes worn and damaged, preventing the engine from receiving enough fuel.

This is another reasonable answer to the question of what causes rough idle at low rpm.

You might realize the fuel pump is responsible when there's stalling in the vehicle, and it isn't easy to start.

However, the car's idle speed can change due to wear and tear. Having a tune-up can help restore the correct idle speed.

If the rpm drops below 600 rpm, it might be the culprit.

The fuel filter is an essential part of the vehicle's engine and can become blocked, preventing it from receiving the proper amount of fuel.

This is another common reason a vehicle would rough idle at low rpm.

Other common symptoms of a clogged fuel filter include a car not starting, an inconsistent or rough start, and a blocked fuel filter.

Depending on the vehicle's temperature, different fuel mixtures are required for different types of cars.

For instance, a cold-start vehicle requires a richer mixture than a typical one. The temperature sensor can fail, resulting in the wrong combination being used.

A poorly functioning temperature sensor can cause rough idle during cold starts.

However, the issue might be less apparent once the temperature is warmed.

A vacuum in the intake manifold allows the car to suck in a lot of air. Without the proper air mixture, the engine can't perform correctly.

A vacuum system issue can cause a vehicle to sputter or slow down. Some of the symptoms of this issue include rough idle, lack of power, and sputtering.

The airflow sensor is also a vital part of the vehicle's engine, and it determines how much fuel to use based on the amount of air in the system.

If the sensor fails, the computer will not be able to mix the correct fuel mixture properly.

If the airflow sensor is not working correctly, then it can cause a vehicle to sputter or slow down. Other symptoms of this problem include rough idle and sputtering.

The spark plugs are the components that ignite the fuel in the engine.

If the plugs are not working correctly, they can prevent the fuel from igniting appropriately, causing rough idling at low RPM.

The exhaust gas recirculation valve is also a vital part of the engine and can become stuck open or closed.

A blocked or stuck valve can cause various performance issues.

Other common symptoms of a blocked or stuck recirculation valve besides rough idling at low rpm include reduced fuel economy and slow acceleration.

When Should You See the Mechanic?

Although a rough idle can be a harbinger of something more costly and shouldn't be ignored, it can be a sign of a deeper issue. So when should it be taken in for diagnostics?

If your car idles consistently, it's time to take it to the mechanic. However, it can also be a sign of other issues.

These symptoms include excessive idle, poor engine performance, and more.

A slow acceleration or a lack of power are also signs that can indicate a problem with your car's engine.

A rough idle is often a symptom of something more severe than your car's mechanical issues.

In most cases, it's best to inspect the vehicle to find the cause of the problem.