Nissan Rogue vs Nissan Murano: Which Is Right for You? 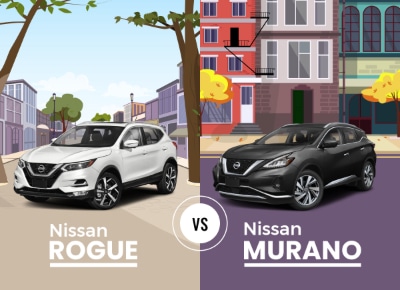 The 2022 Nissan Rogue and Murano are enjoyable in their own way, but they are notably different in size, content, and purpose.

Nevertheless, there are reasons to prefer one of these 5-passenger crossovers over the other, not because one is better in general, but because each has its distinct personality and strengths.

Where the Rogue has its convenience and fuel economy, the Murano has its style and power. Let’s take a closer look at these two family-friendly crossover SUVs and sort out which might serve your needs better. 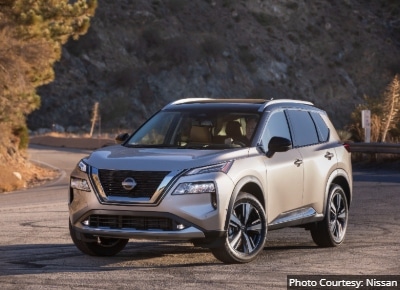 At a quick glance, it’s strikingly odd that the smaller Rogue has so much more cargo space with the rear seats folded down. After all, the Murano is listed as a midsize vehicle, whereas the Rogue is considered a compact one.

Overall, both crossovers offer comfortable interior roominess and a sizable cargo area. Front-seat occupants particularly are well treated. On the other hand, sitting in the rear seat of the Murano, which has significantly more shoulder room, is a bit more comfortable overall than in the Rogue.

Be aware that trims equipped with a moonroof lose some headroom all around, but more noticeably in the second row of the Rogue. Ultimately, the Murano, having around 2.5 cubic feet more total passenger volume, feels a smidge roomier.

The Takeaway: In terms of cabin roominess, it’s nearly a draw between these two models. The Murano opts for a tad more comfort, but the Rogue wins out when packing up for a weekend getaway. 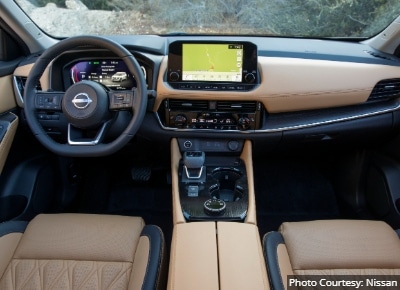 Although the Murano presents a stylish, even trendy overall appearance, the current generation has been around since 2015. For the Rogue, its latest full-on redo came out for the 2021 model year. It’s still more utilitarian-looking than the Murano, but it shows more forward progress with its technology features. What remains important for the Murano is that its interior ambiance feels markedly more upmarket than the Rogue’s, and provides more available advanced comforts such as heated and cooled front seats.

The principal indicators for cabin serenity are uniformly called noise/vibration/harshness, or NVH. Both the Murano and Rogue fare well in this regard, but the Murano underscores its premium appeal with a bit more refinement in this area.

Even so, the Rogue has moved upmarket in this generation. Notably, its in-vehicle telematics is ahead of the Murano’s and provides a more comprehensive digital experience. Available technologies found in the Rogue but not the Murano include a larger central infotainment touchscreen display (9-inch in higher trims), an all-digital instrument cluster, and a head-up display.

The Takeaway: Having the benefit of a more recent redesign, the Rogue has clearly moved up several notches in all aspects of its interior presentation and claims a digital-age advantage over the Murano. Where the Murano takes the lead is in its more refined creature comforts. 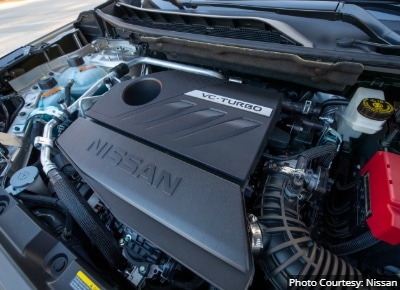 Here’s where the Rogue and the Murano most clearly part company. While the Rogue now utilizes a turbocharged 1.5-liter 3-cylinder engine that makes 201 horsepower, the Murano employs a much more robust 260-horsepower 3.5-liter V6. Of course, the Murano pays a penalty in fuel economy for all that power, not to mention carrying around nearly 400 pounds more weight.

Overall, the power to weight ratio is a tad better in the Murano. Even so, acceleration is assertive enough in both models and with all-wheel drive, there’s a bit more grip when accelerating from a stop. Interestingly, our research indicates that with its new, more powerful variable compression turbo engine, the Rogue boasts 0 to 60 mph sprints that rival the Murano’s. Plus, Nissan rates both models as having a 1,500-pound towing capacity.

The Takeaway: If you’re going for fuel economy, the Rogue is unquestionably the better choice. Where it gets a bit fuzzy is the criteria one considers important for performance. 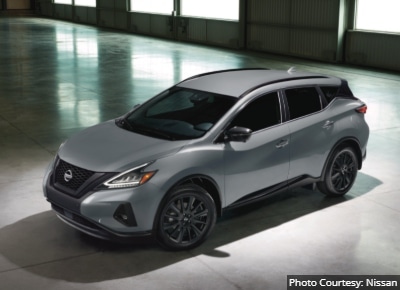 Additional driver-assist features are available including intelligent lane intervention to automatically help keep the vehicle within its lane on the highway, and dynamic cruise control to moderate acceleration and braking in heavy traffic or when cruising. The Rogue goes a step further with intelligent mobility, offering a system that links with the navigation system to integrate GPS maps and traffic information.

The Insurance Institute for Highway Safety has bestowed its Top Safety Pick+ designation on both the Rogue and the Murano. Its testing covers both crashworthiness and collision avoidance and mitigation. What’s especially notable is that both vehicles’ automatic emergency braking systems received superior ratings.

The Takeaway: Both the Rogue and Murano come equipped with a substantial array of safety features and technologies. Consequently, they both score extremely well for collision safety and available advanced safety technologies.

The Rogue delivers better fuel economy and can handle more cargo. It has significantly improved in all aspects over its previous generation.

Still, if one’s intention is to maximize passenger comfort and enjoy a more upmarket cabin environment, the Murano will serve better.

As for value, one could purchase an all-wheel-drive Rogue SV, add in the Premium Package option and still pay less than the front-wheel-drive Murano base model.

What models does the Nissan Rogue compete with?

At its price point, the Rogue competes with the Chevrolet Equinox, Ford Bronco Sport, Honda CR-V, Hyundai Tucson, Kia Sportage, Mazda CX-5, Subaru Forester, Toyota RAV4, and Volkswagen Tiguan. For starters, though, narrow your search down to the Tucson, CR-V, and RAV4.

Essentially, yes. The V6 engine in the Murano provides more horsepower and more torque. The vehicle weighs more, but still manages a better power to weight ratio. The Rogue further improved its performance for 2022, gaining about 11 percent more horsepower with a new turbo engine.