Nissan Rogue vs Hyundai Tucson: Which Redesign Is Better? 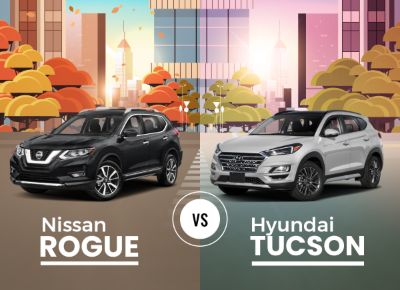 The Nissan Rogue and the Hyundai Tucson are direct competitors in one of the most contentious markets in the automotive industry. The small-but-not-quite-compact sport-utility market is outsized, and when it comes to crossover sales, this segment is where it’s happening fastest.

The Tucson and Rogue recently underwent redesigns to make them more competitive to buyers.

The greatest differences between the two are a matter of style. Both are priced about the same at their commensurate trim points, both offer about the same amount of space and cargo, and both are fuel sippers. 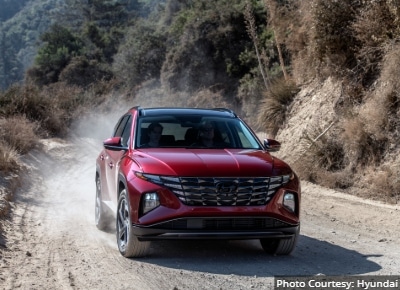 The Nissan Rogue and Hyundai Tucson have similar trim levels and pricing, though some differences could affect a buying decision. The greatest difference is in the availability of a hybrid model for the Tucson (not reflected in the above chart). However, the fuel economy gains may not be enough to convince buyers at just 38 mpg city and highway.

In both the Rogue and the Tucson, most other trim point differences are cosmetic and technological. However, it’s worth noting that besides the hybrid, the Tucson also has an efficient and more powerful turbocharged engine choice above its naturally-aspirated base engine. The Rogue has only one engine and powertrain choice.

The Nissan Rogue and the Hyundai Tucson come with the same basic technologies on board as standard, including 17-inch alloy wheels, a small touchscreen infotainment system, and Apple CarPlay and Android Auto compatibility. Most onboard safety systems are standard, including forward collision warning and mitigation, lane-keeping assistance, etc. The Rogue includes rear automatic braking and cross-traffic alerts as standard, whereas the Tucson does not. 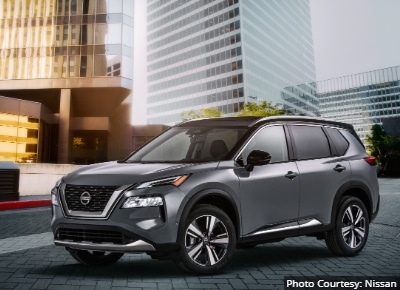 The Hyundai Tucson and the Nissan Rogue are nearly exactly the same size.

Headroom is almost identical in both models up front, but the Tucson has over an inch more in the rear seats. 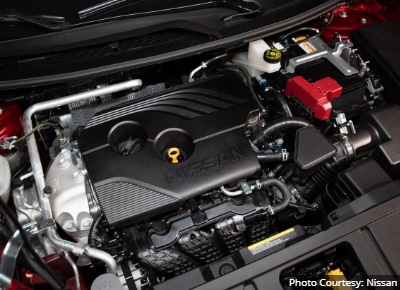 Comparatively, the Nissan Rogue and the Hyundai Tucson are very similar in performance and economy metrics as well. The Tucson has a few more horsepower at 227 (turbo four) and a higher towing capacity (2,000 pounds) to go with that. Inline four-cylinder engines power both vehicles with automated transmissions. Front-wheel drive is standard, with all-wheel drive an option.

The fuel economy is very similar, with the Tucson achieving 24-26 mpg in the city and 29-33 mpg on the highway, depending on engine choice (not including the aforementioned hybrid). The Rogue is rated at 25-27 mpg city and 32-35 highway, depending on front-wheel or all-wheel drive choice. Thanks to the Rogue’s slightly larger fuel tank, both vehicles have about the same overall range between fillups.

The greatest difference in performance between the Tucson and the Rogue is with the former’s turbocharged engine option. The standard 2.5-liter engine in the Tucson outputs more HP than the 2.5L in the Rogue, but the Tucson has a 1.6-liter turbocharged option that pushes the 187 of the base engine to 227 HP. As a result, the turbocharged engine is faster to engage, more lively, and sacrifices little fuel economy to get those things. 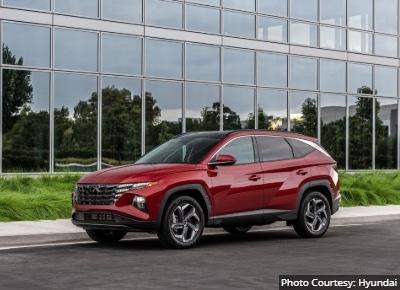 Both the Rogue and the Tucson come with solid credentials in basic safety technology and crash test ratings. The Rogue did slip a bit in frontal crash ratings from the National Highway Traffic Safety Administration (NHTSA) but scored well on the Insurance Institute for Highway Safety (IIHS) tests.

Warranties are a good indicator of quality. The Tucson’s 5-year/60,000-mile basic warranty is a big jump from the Rogue’s 3-year/36,000-mile warranty. The Nissan warranty is standard for the industry, while the Hyundai warranty is segment-leading. 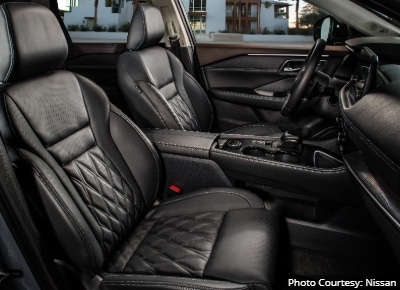 Both the Nissan Rogue and the Hyundai Tucson underwent recent, extensive redesigns in their current renditions. The Rogue became more muscular in appearance with a flatter front grille, more square-bodied design, and taller look. The Tucson gained sporty lines, a faster-paced look, and bold styling. The two vehicles are night and day different in exterior looks.

Inside, the two crossovers are much more similar. The Rogue has a more luxurious appearance, but the Tucson carries subtler and more fluid lines for its dashboard. Comfort and controls layout is comparable in both. A few differences, such as Nissan’s “Zero Gravity Seating” in the Rogue versus the more gadget-centric interior in the Hyundai Tucson, are worth noting. We prefer the more traditional shifter in the Tucson, for example, versus the less intuitive shift handle in the Rogue. Conversely, the comfort levels in the front and back seats of the Rogue are a little more comfortable than are those in the Tucson. 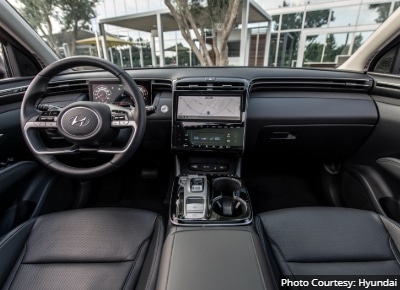 In price comparison, the Hyundai Tucson is consistently cheaper than the Nissan Rogue, but the differences are small. At the base level, it’s a matter of a few hundred dollars, and that difference remains throughout the trim points when equipment is compared closely.

Most of the value comparison, therefore, is going to come from resale expectations and reliability. On these fronts, the Tucson wins out with a longer warranty and slightly higher resale value after three years of ownership.

Which Is Better, the Nissan Rogue or Hyundai Tucson?

Our overall assessment is in favor of the Hyundai Tucson.

However, shoppers are advised to check both models since the Nissan Rogue and its latest improvements are very competitive. Especially if a more comfortable interior for the long term is your focus.

When were the Nissan Rogue and Hyundai Tucson redesigned?

Is the Hybrid Tucson more expensive and worth that added cost?

That depends on what is needed out of the hybrid. If your driving is primarily in the city, then the 38 mpg rating of the Tucson Hybrid could be worth the added $3,000-4,000 price tag. For most, however, the “hybrid premium” paid is not likely to pay off in fuel savings.

Which is better off-road and in bad weather, the Tucson or the Rogue?

Our experience with these vehicles says they’ll be about the same. The Tucson has slightly better on-road, all-weather capability when equipped with AWD, but the Rogue has a little more off-road capability when AWD-equipped. Most users will notice little difference between the two when similarly equipped.

Which is more fuel-efficient, the Nissan Rogue or Hyundai Tucson?

The fuel economy is very similar, with the Tucson achieving 24-26 mpg in the city and 29-33 mpg on the highway, depending on engine choice (not including the aforementioned hybrid). The Rogue is rated at 25-27 mpg city and 32-35 highway, depending on front-wheel or all-wheel drive choice. Thanks to the Rogue’s slightly larger fuel tank, both vehicles have about the same overall range between fillups.