Nissan Pathfinder vs. Dodge Durango: Which Has More Power? 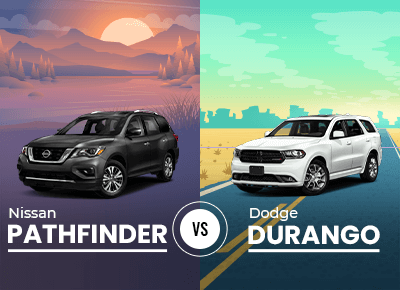 Though the old Dodge might seem out of its element against an all-new Nissan, don’t count the Durango out just yet. Its massive power, huge space, and great pricing keep it relevant even against the Pathfinder’s fresh styling, advanced safety features, and off-road capability.

Both vie for buyers who value copious amounts of passenger space and serious towing and hauling specs. 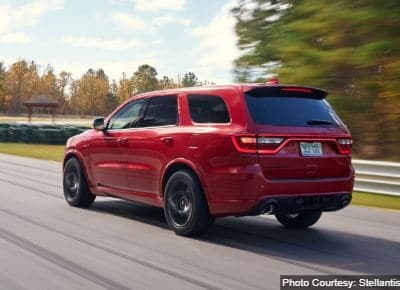 Right off the bat, the Durango comes in as the burlier of the SUVs: it’s longer, lower, and just as wide as the Pathfinder. It also rides a wheelbase that stretches a full six inches longer than its Japanese rival.

Oddly enough, all that extra wheelbase of the Durango doesn’t translate into significantly more space. A mere 1.5 additional cubic feet behind the third row and five cubes in total are all the Durango has on the Pathfinder, which points to superior space utilization on the new Nissan SUV. 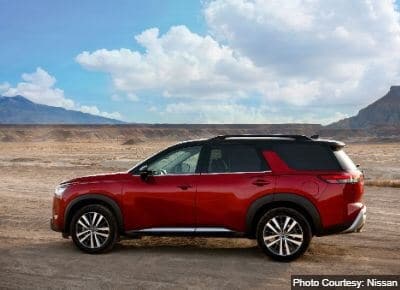 The Pathfinder and the Durango each chart their own unique course when it comes to design. The Nissan aims for trendy off-road vibes, using lots of hard angles and chunky elements to achieve a tough, trail-ready look.

The Durango, meanwhile, leaned into Dodge’s muscle-car root. It sports a front fascia similar to that of the Dodge Charger and Challenger, and the performance models add elements like big wheels, fender flares, and gaping hood scoops.

While the new, sharp-edged Pathfinder has definitely improved its styling game over its blubbery predecessor, the more noteworthy feat might be that the Durango still looks fresh after ten years on the market. That said, nobody will mistake it for a new SUV - and its age becomes especially apparent when parked next to the Nissan. 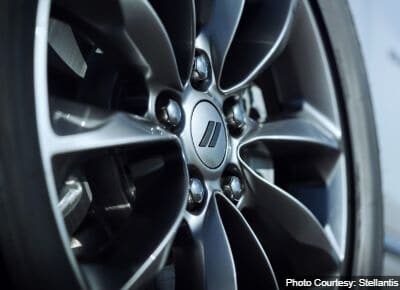 This is, without a doubt, where the Pathfinder and the Durango couldn’t be more different. Yes, both models offer a base V-6 with nearly identical displacement and horsepower figures. But while the Nissan starts and ends there, the Dodge is just getting started.

First, let’s get the proletariat powertrains out of the way. Nissan drops a 3.5-liter V-6 with 284 horsepower into the engine bay of every Pathfinder. The main difference with the new model is that a nine-speed automatic transmission is being used instead of the prior model’s CVT.

Dodge opens the Durango range with a 3.6-liter V-6 making 293 horsepower. It pairs up to an eight-speed automatic, which sends power to the rear wheels. That’s notable in this day and age when many so-called SUVs send power to the front wheels - the Pathfinder included. Both SUVs offer all-wheel drive on most trim levels.

Dodge wasn’t satisfied with a mere 293 horsepower for its family SUV, however. First, it made the famed 5.7-liter HEMI V-8 with 360 horses available. It followed that effort with the SRT 392, which gets a 6.4-liter V-8 with 475 horsepower. And most recently, they unveiled the Durango Hellcat, a 710-horsepower absurdity that ranks among the most powerful SUVs on the market at any price range.

Suffice to say, when it comes to performance on the pavement, the Durango has the upper hand by a 400-horsepower margin. 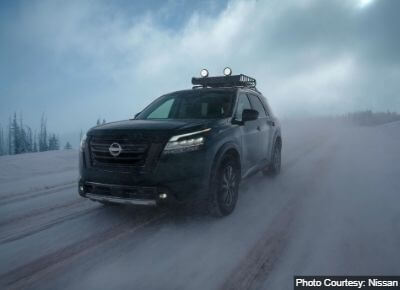 While the Durango might rule on the drag strip, the Pathfinder will likely be the victor on the trail. While detailed specs are yet to be revealed, Nissan has shared enough details to suggest the Pathfinder is more than just a cool-looking crossover. Under its bodywork is hardware that can back up its looks.

While base Pathfinders make do with front-wheel drive, the available all-wheel drive system features seven distinct drive modes that can account for terrains such as snow, sand, and mud. It can also optimize drive systems for towing. That’s important when you’re cleared to tow up to 6,000 pounds.

The Durango skews its drive modes towards performance, but there is a snow and tow mode. While Nissan touts the Pathfinder as being best-in-class for towing capability, they conveniently ignored the Durango when making that claim, as it can pull an incredible 8,700 pounds when equipped with the 5.7-liter V-8. For the record, that’s more than many bigger, full-frame SUVs. 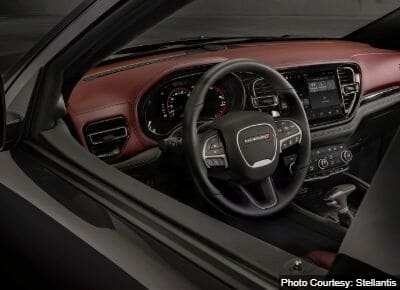 Neither of these vehicles has historically been fuel misers, and even the Pathfinder’s redesign won’t do much to change that. The EPA hasn’t yet tested it, but with its blocky styling and carryover engine, we don’t expect any better than last year’s 20 mpg city and 27 highway. 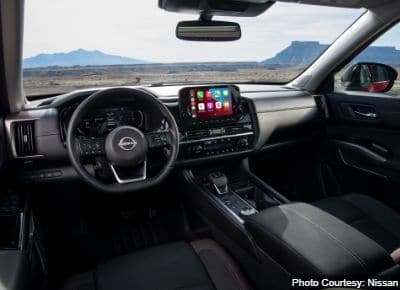 The Durango, being old as it is, doesn’t get any active safety equipment as standard - even automatic emergency braking has to be ordered separately. Other available safety equipment include adaptive cruise control and lane-keep assist.

The Pathfinder hasn’t been officially crash-tested by the NHTSA or IIHS. In testing the Durango, the IIHS noted it did well except in the narrow-offset collision test. The NHTSA awarded it four stars out of five overall. 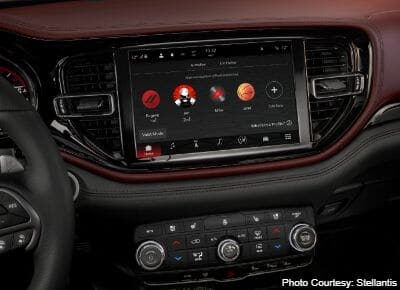 Both SUVs aim to please with their numerous trims and options, but their base trims aren’t anything exciting. There’s standard cloth upholstery, tri-zone climate control, and manually-adjustable seats in both SUVs - but only the Pathfinder comes with a third row as standard equipment. In the Durango, you’ll need to pay another $1,095.

On the luxury side of the coin are the Durango Citadel and Pathfinder Platinum. We’re still waiting on Nissan to release pricing on the Pathfinder, so we can’t say how it financially stacks up to the $49,300 Durango Citadel, but we do know it will feature an all-digital dash, a head-up display, semi-aniline leather, captain’s chairs, and other goodies. The ritzy Dodge features Nappa leather, heated and ventilated seats, a sunroof, and lots of chrome touches.

Low-trim Durangos feature an 8.4-inch touchscreen; fancier models use a 10.1-inch screen. All models use the Uconnect software, a setup that ranks among the best in-car technology systems. The Pathfinder uses a base 8.0-inch touchscreen that gets usurped by a 9.0-inch unit on the top trims. Both SUVs come standard with Apple CarPlay and Android Auto. 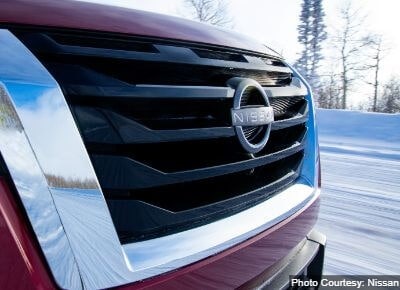 Without any pricing data from Nissan, we’re hard-pressed to evaluate what sort of value the Pathfinder might offer. But if we use last year’s prices - about $30,000 to $50,000 - as a rough indicator, we can say that the Pathfinder is a lot of crossover for the money. Despite the older engine, it has a lot of great tech, fresh and contemporary styling, and lots of room for passengers.

The Durango is a trickier value proposition. Its most popular models sit in that same price range as the old Pathfinder. We can’t help but question the merit of buying a well-equipped V-6 Durango when there are so many newer, more modern SUVs to choose from.

Our thought process flips when we start thinking of the V-8 models. Unlike the unremarkable V-6 trims, the V-8-powered Durangos are performance bargains that likely represent the last great affordable eight-cylinder family SUVs. And if the $80,000 Hellcat Durango doesn’t sound like a bargain, think of it this way: how many other 700-horse vehicles can you buy for under $100,000? And of those, how many can tow your boat to the marina and easily swallow multiple car seats?

Odds are the 2022 Pathfinder will be priced decently, but it will never be the screamin’ deal a V-8 Durango is.

You may qualify for additional deals and incentives, check out this month's Dodge deals here.

Nissan Pathfinder vs. Dodge Durango: Which Is Better?

Objectively, you might try to say the all-new Pathfinder trumps the stodgy old Durango. But to say that is to ignore the Durango’s finer points: excellent infotainment, crazy performance, and massive towing capability. The Pathfinder simply can’t compete on those fronts. If you like speed or need to tow, the Durango is for you.

The Pathfinder, meanwhile, offers style, safety gear, and a heap of modern tech not found in the Durango. If that’s what you want, the Nissan is the better choice.

What SUVs are comparable to the Dodge Durango and Nissan Pathfinder?

Essentially all three-row SUVs built by mainstream manufacturers and priced between $30,000 and $50,000. The long list of entrants fitting that criteria include the Chevrolet Traverse, Ford Explorer, Volkswagen Atlas, Subaru Ascent, Honda Pilot, and Toyota Highlander.

Are they discontinuing the Dodge Durango?

From our understanding, no. However, Dodge’s parent-company FCA recently merged with french manufacturer Peugeot to create a new entity known as Stellantis. It’s possible the powers that be may decide to kill off the Durango to support sales of sister brand Jeep. That said, this all us speculating. For now, the old Durango soldiers on.

Which costs less, the Dodge Durango or Nissan Pathfinder?

Overall, the Nissan - you won’t see any Pathfinder coming close to the MSRP of the Hellcat or SRT 392 Durango. Lower trims will be neck-in-neck with the Dodge, so we’re eager to learn the official pricing of the Pathfinder.

Which seats more, the Dodge Durango or Nissan Pathfinder?