What Happens if You Mix Premium and Regular Gas? 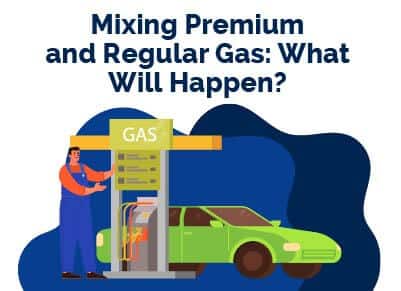 Refueling is one of the costliest aspects of maintaining a car. Gas prices have increased significantly, so it's tempting to fill up with regular fuel. But is it a good idea? What happens if you mix premium and regular gas?

While some vehicles can run on regular or premium gas, it's generally not a good idea to mix both to avoid damaging your car's engine. Doing so could cause detonation and decrease the performance of your vehicle.

Let’s discuss the relationship between premium and regular gas.

Difference Between Premium and Regular Gas

Both regular and premium gas is made from the same type of crude oil. However, the fuel's octane rating determines its ability to handle improper engine combustion.

Regular gasoline has an octane level of 87, which is suitable for most cars with traditionally powered engines.

On the other hand, premium gas has an octane rating of 93 or 91 for vehicles with high compression or turbocharged engines.

What Happens if You Mix Premium and Regular Gas?

Modern cars have advanced technology that allows them to recognize the type of fuel that's used because the cars made during the last decade can detect the different fuel types.

Older cars may knock sounds when running on the wrong fuel as their engines have fixed fuel injectors and ignition timing.

On the other hand, modern cars can modify their parameters, depending on their fuel. When blending premium and regular gas, the latter will affect the octane levels and could impact your vehicle's gas mileage.

Therefore, it's recommended to top up with the correct fuel type whenever possible. Contrary to popular belief, running on premium gas will not affect your car's performance.

However, it's important to note that this type of fuel will not clean or improve the appearance of your vehicle's fuel system.

If your car uses regular gasoline, you should refuel it with regular gas. Some believe this fuel can help improve their car's fuel system, but they couldn't be more wrong.

Refueling with premium gas will not harm your vehicle and will not improve its performance.

Regular fuel could be harmful if your car requires you to refuel with premium gas.

An octane booster can help protect your car's engine (which requires premium gas) by increasing the fuel's octane rating.

These fuel additives are designed to increase the fuel's octane level.

There are several octane boosters formulated to clean and improve the components of your car's engine. It can also help increase the octane rating of the fuel.

Why Some Vehicles Use Premium Gasoline

Some car manufacturers suggest using premium gas to improve the performance of their vehicles, while others require it to protect the engine from damage.

However, most modern cars with forced induction engines should use premium gas.

These engines use either superchargers or turbochargers to increase air intake. These components help increase the cylinder pressure and compression.

A naturally aspirated engine, which doesn't have a supercharger or turbo, can also benefit from having high compression ratios.

As a result, these engines are more efficient and can extract more power from their combustion using less fuel.

When the fuel in an engine's combustion chamber ignites too early, it can lead to a detonation, also known as engine knock.

This happens when the piston gets in the engine's movement, preventing the car from starting.

Aside from being annoying, engine knocking can also compromise the efficiency and performance of a car's engine.

This can be caused by adding friction to the cylinder walls, the crankshafts, and the other components.

If it happens frequently, it can cause severe damage to the engine's components.

Most cars, especially those with naturally aspirated engines, will work well with regular gasoline. However, manufacturers also produce smaller displacement engines with turbos in response to the increasing demand for fuel-efficient cars.

Although all high-compression engines are not required to run on high-octane fuel, some models with SkyActiv engines can still benefit from using this type of fuel.

For instance, the new Mazda 3 uses a SkyActiv engine that has a horsepower rating that's based on the type of fuel it uses. Despite high-compression engines, modern cars can still run on gasoline.

This is because modern vehicles equipped with electronic control units (ECUs) can alter the timing of their engines to accommodate low-octane fuels.

However, this doesn't mean that all cars with these units can also run on regular gasoline. The best way to determine which fuel to use is to inspect the back of your car's fuel lid. In addition, most cars have a sticker that informs you of the minimum octane rating required.

You can also check your owner's manual or the dealer's website for more information.

Regardless of where you buy your fuel, gasoline is the same regardless of brand. The quality of the fuel and the additives used by the gas company are the factors that determine its consistency.

The federal Clean Air Act was passed to reduce air pollution in the country. As a result, the EPA is responsible for regulating the additives and fuels used in motor vehicles.

Aside from keeping the fuel lines clean, fuel additives can also improve the performance of a car's engine. Manufacturers have a minimum requirement for the additives they use in their products.

Most commonly, cheaper brands use the bare minimum, while the more prominent companies use more additives.

Getting your fuel from a different gas station isn't harmful to your car, but you should still use reputable brands as they usually have better additives.

Can I Put Gasoline in a Diesel Car?

If you're planning on filling up a diesel vehicle with gas, do not do so. According to several experts, doing so could cause severe damage to the car's components.

Also, if you accidentally fill up a car with diesel, it could run for a couple of miles before it loses its power.

If you accidentally fill up a gasoline car with diesel, you must flush out the fuel lines and replace them with new fuel. If this happens, better to call a trusted mechanic to help fix it to avoid causing further damage.

What Is Premium Gas?

Premium gasoline is a type of fuel that's higher in octane. This means that it can endure more compression before it ignites.

Most high-performance cars require higher-octane fuel to work properly. However, since the compression ratios of these engines are higher, regular gas will not affect the car's performance.

What Is Regular Gas?

Unleaded gasoline (regular gas) is commonly used in cars. The term regular was previously used to refer to lead-contaminated gasoline.

However, due to the ban on lead in most countries, it is now referred to as regular gas with a lower octane level.

The octane level determines the combustion rate of the fuel in an engine. Premium gas, therefore, does not last longer or extend the life of your car.

Aside from regular maintenance, various ways can reduce your engine fuel consumption. One of these is by using a car with a high fuel economy.

What Happens if You Put Regular Gas in a Premium Car?

The higher-pressure components of the engine generate more heat and pressure, which can cause the fuel to ignite prematurely. When the mixture of air and fuel is not evenly ignited, it's called engine knock.

Although it's OK to have occasional knocking, persistent knocking can damage vital components, such as the cylinder walls, the crankshaft, and the pistons.

Although engine knock can be caused by various factors, such as carbon build-up and bad spark plugs, low-octane fuel is often the culprit. Premium gas, on the other hand, is less likely to ignite early due to its higher-octane rating.

This means the vehicle's electronic control unit has time to improve detonation and efficiency. In other words, it is terrible to put regular gas in a premium car as it can cause extensive damage to your vehicle.