Where Did Car Manufacturers Get Their Name? 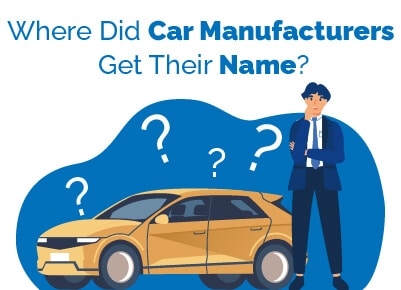 Michael Collado is a car buying expert and has been a professional automotive writer since 2009.  He’s written about dealership sales, vehicle reviews and comparisons, and service and maintenance for over 100 national automotive dealerships.  Previously, Collado was a copywriter at the ad agency TBWA/Chiat/Day where he worked on brand campaigns for Nissan, ABC Television, Sony PlayStation, and Energizer. His recognition in the ad industry includes awards from Communication Arts and The Clios.

Collado has a Bachelor’s degree from the University of South Florida, with a major in Psychology and a minor in Marketing.

Ever wonder where automakers get their name from? We were curious as well.

That’s why our team decided to put together this directory of the top 34 automaker name origins.

Check out where your vehicle’s automaker got its name from. You may be surprised by the results!

What Does Acura Stand For?

Acura actually has a couple of meanings. The most popular origin of the name is derived from the Latin prefix “Acu,” which means “done with precision.”

Acura is owned by the Honda automotive company. It is the luxury automotive division of the company.

What Does Audi Stand For?

Audi came about from a merger of four different automakers: Audi, DKW, Horch, and Wanderer. Together the company would form Auto Union AG, which would later become AUDI AG.

Audi is a subsidiary of the Volkswagen group.

What Does BMW Stand For?

BMW stands for “Bayerische Motoren Werke Aktiengesellschaft” or in English as “Bavarian Motor Works.” The company was founded in 1916 and it is currently headquartered in Munich, Bavaria, Germany.

What Does Buick Stand For?

Buick received its name from the company founder, David Dunbar Buick. Mr. Buick was known as one of the leading pioneers of the automotive industry.

Buick is the premium vehicle division of General Motors.

What Does Cadillac Stand For?

Cadillac was founded in 1902 by Henry Leland. He named the company after Antoine de la Mothe Cadillac, who was the founder of Detroit.

Cadillac is the luxury division of General Motors.

What Does Chevrolet Stand For?

Chevrolet gets its name from its co-founder Louis Chevrolet, who co-created the Chevrolet Motor Company in November of 1911.

Chevrolet is a division of General Motors.

What Does Chrysler Stand For?

The company got its name from its founder Walter Chrysler who founded the company in 1925. The company was later reorganized as the Chrysler Organization.

Chrysler is made by Fiat Chrysler.

What Does Dodge Stand For?

Dodge Motor Company was so named by its founders John and Horace Dodge. The Dodge brothers founded the company in 1900 in Detroit.

Dodge is made by Fiat Chrysler.

What Does Ford Stand For?

Ford is named after its founder Henry Ford. Mr. Ford founded the company in 1906 and soon made it the biggest automotive company in the world during the early 1990s.

What Does Honda Stand For?

Honda is named after its founder Soichiro Honda. In addition to automobiles, Honda also makes motorcycles, airplanes, and lawn mowers.

What Does Hyundai Stand For?

In Korean, the word “Hyundai” translates roughly to the word “modernity.” The company was founded in 1947 as Hyundai Construction. Today, Hyundai is a leading marker of automobiles, trucks, and buses.

What Does GMC Stand For?

GMC was first used in 1912 and it stood for the General Motors Truck Company. Today, GMC is the nameplate for GM’s lineup of premium trucks and SUVs.

GMC is made by General Motors. It is the company’s premium truck and SUV brand.

What Does INFINITI Stand For?

INFINITI's name was inspired by the ancient infinity symbol. The symbol, which looks like the number 8 lying on its side, was first used by mathematicians to mean unending.

INFINITI is made by Nissan Motors.

What Does Jaguar Stand For?

The original name for the automaker was Swallow Sidecar. However, the company changed its name when it came out with its new low-slung sports car.

Jaguar is made by Tata Motors.

What Does Jeep Stand For?

Jeep derives from the military term GP, which stands for General Purpose vehicles. Most Jeep models are devised from U.S. military vehicles.

Jeep is made by Fiat Chrysler.

What Does KIA Stand For?

KIA devised its name from the word KI or “To Rise From” and the letter  A stands in for Asia. Therefore, the word KIA means, “To Rise from Asia.” The company was originally founded in 1952 as Kia Industries.

KIA is made by the Hyundai Motor Corporation.

What Does Land Rover Stand For?

Originally, the company was called the Rover Company. The legend behind the name comes from Spencer Wilks, the Managing Director of the Rover Car Company In 1947. While driving his heavily modified Rover 12 across the rugged landscape, the estate's gamekeeper Ian Fraser remarked that it must be a "Land Rover.” Afterward, the name was adapted for the nameplate.

Land Rover is made by Tata Motors.

What Does Mazda Stand For?

The term “Mazda” comes from the god of harmony, intelligence, and wisdom - Ahura Mazda. The company was born in 1920 in Hiroshima, Japan.

What Does Mercedes-Benz Stand For?

The Mercedes-Benz name is a combination of the names of the two founders of their respective automotive companies: names: Mercedes Jellinek and Karl Benz.

Mercedes-Benz is owned by Daimler AG.

What Does Mitsubishi Stand For?

Nissan is the majority owner of Mitsubishi. In turn, Nissan is part of the Nissan-Renault alliance.

What Does Nissan Stand For?

The name 'Nissan' is an abbreviation used on the Tokyo Stock Exchange for Nihon Sangyo. The term NIssan was first used when the automotive company was founded in 1933.

Nissan is part of the Nissan-Renault alliance.

What Does Porsche Stand For?

Porsche got its name from its founder Ferdinand Porsche. Dr. Porsche first started designing cars when he won a government contract to create the Volkswagen Beetle.

Porsche is owned by the Volkswagen Group.

What Does RAM Stand For?

RAM got its names from Dodge when the company created the pick-up truck with a Ram’s head logo. The Chrysler CEO Lee Iaccoa decided that RAM was a good name for the truck line.

RAM is a division of Fiat Chrysler.

What Does Subaru Stand For?

Subaru is a long standing name for a grouping of six stars in the Taurus constellation. The automarker adopted the name when the company was founded in 1953.

Subaru is owned by the Subaru corporation.

What Does Toyota Stand For?

The "Toyota" name comes from the founder. Sakichi "Toyoda.” Originally, the cars had the name Toyoda on them. However, the automaker changed the name to Toyota in 1936.

What Does Volkswagen Stand For?

The name came from the German government in the 1930s as a name for a national automobile. Originally, the name of the car company was “Volkswagenwerk” which translates to “The People’s Car Company.”

What Does Volvo Stand For?

Volvo is a derivative of the Latin word Volvere which translates to “I roll” in English. The automaker adopted the name in 1927.

What Does Tesla Stand For?

Tesla is named after the invented Nikola Tesla. The company was founded in Silicon Valley in 2003.

What Does MINI Stand For?

MINI got its name from the automaker British Motor Corporation. The original name of the vehicle was the Morris Mini-Minor and the Austin Seven. However, the name was shortened to MINI in 1959 and the vehicle name has extended to an entire brand.

MINI is made by the BMW Group.

What Does Genesis Stand For?

The automaker received its name when Hyundai took the Hyundai Genesis vehicle name and adopted it to their line of luxury vehicles.

Genesis is owned by Hyundai.

What Does Alfa Romeo Stand For?

What Does Aston Martin Stand For?

The name of the company comes from its founder Lionel Martin who took his vehicle to the Aston Clinton Hill Climb race and won.