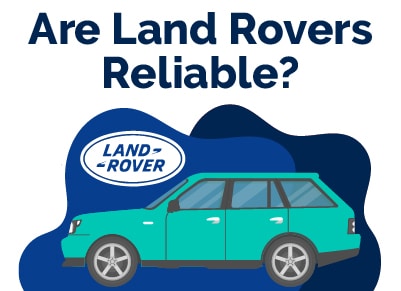 The first step to finding some of the best Land Rovers to buy begins with understanding their reliability.

Land Rover has many cars in its line-up, including Range Rover, Defender, Discovery, and varying models and trims. However, Range Rover seems to be the most popular among all the cars produced by Land Rover.

This is because the Range Rover is the only car that can drive you through the Sahara Desert without much ado. Even the late Queen Elizabeth drove a Range Rover. But are Land Rover reliable cars?

Overall, Land Rover is an unreliable car brand. Land Rovers’ reliability ratings have been battling for the low spot for a long-time. In 2019, they took the last position as the most unreliable car, only to bounce a step forward from the bottom of the pile.

Land Rover users are fond of complaining about the numerous issues on the car that affect reliability. Nevertheless, are Land Rovers still unreliable? Read on to find out more about Land Rover’s reliability.

No. Land Rover cars are still unreliable. The Land Rover brand has done little or nothing to improve the quality of its cars.

Between 2007 to 2016, Land Rover, with its Range Rover car, battled with a 2.5/5 reliability rating. In the 2019 Reliability Index survey, Land Rover was considered the most unreliable car. Recently, Land Rover ranked 31 out of 32 car brands on reliability terms.

The poor reliability of Land Rover cars is due to the numerous problems their cars are riddled with. You are either battling with cylinder slips, brake malfunctions, or glitches in sensors. As a Land Rover user, you have a greater chance of experiencing one major issue in the first year of purchasing them.

The unreliability of Land Rover cars varies on the different cars that they produce, but in its entirety, they have poor safety ratings. Land Rover doesn’t have any IIHS or NHTSA top-rated car accolades.

Why Land Rover Is Considered Unreliable

One of the major problems of Land Rovers is that they break down a lot. It is reported that nearly 71% of used Land Rover cars break down annually.

Land Rover has a 16% probability of major repairs and a 0.7 chance of visiting the mechanic. This means you will spend more on maintaining and repairing a Land Rover car than any car in its category.

We believe Land Rover’s problems started with the financial problems that plagued the brand. This was evident in the billion-dollar quarterly loss of Land Rover and the tax that runs to $632 million. This led the brand to employ cost-saving options, including cutting over 4,500 jobs/staff globally.

There is no way that this will not affect the quality control and production strength of the brand. If you want to confirm how problematic Land Rovers are, visit a towing shop, you will confirm that most of the towed cars are Land Rover cars.

It is expensive to repair and maintain a Land Rover car. It costs an annual average of $1,174 to repair a Land Rover. This is because most of their car parts are expensive.

The high maintenance cost of Land Rover cars is affected by how troublesome they are. You are prone to visiting the mechanic regularly, which adds more expenses.

Although Land Rover promises impressive safety features and technology in its cars, it has a poor safety rating.

It is important to note that even though Land Rover has fewer cars on IIHS safety rating, the Land Rover Defender has a five-star Euro NCAP safety rating. This was awarded due to its improved safety technology and the ultra-tensile(stiff) aluminum-intensive body.

The body design, engineering, and technology of the defender give us hope that Land Rover will start making more safer cars.

Durability and reliable quality aren’t a thing for Land Rover cars. These cars are always battling with design flaws and engineering breakdowns.

However, you can expect your Land Rover car to reach 150,000 miles, but you will have much maintenance to do on them.

Irrespective of how bad Land Rovers are, they have some cars with great gas mileage. Most Land Rover cars like the Range Rover model boast an impressive engine with impressive performance and gas mileage.

Land Rover’s designs are usually a great definition of luxury. The Land Rover brand was able to distance itself from the noise, competition, and trend, employ a modernist design philosophy, design cars that stand out, and create an emotional connection with users.

You’ll hardly have a Land Rover drive past you without looking back to catch a second view. The interiors and exteriors are made with great materials that make them quite durable. You can always rely on Land Rover cars to make a statement.

Land Rovers have a line-up of great engines that deliver a burst of power and strength. The engines fitted into Land Rover cars make them a good choice for off-road driving.

Some of the best Land Rover engines include the 2.2L TDi, 300TDi, 2.0L petrol engines, and 3.0 turbo engines. You will achieve up to 404hp, impressive fuel economy, and tremendous efficiency to keep you going.

If Land Rovers are this unreliable, why does the late Queen Elizabeth or many Bollywood celebrities drive them? The answer is simple: Land Rovers are driven because of the luxury, performance, and reputation that precedes them.

You have a car that can run through the desert, with great 4x4 capabilities and the ability to handle any terrain. It is normal to buy a Land Rover just for the status attached to these cars, but you need much discernible mechanical strength to ensure you don’t choose the worst years and models.

How long do Land Rovers last?

Land Rovers last up to 150,000 to 200,000 miles or 10 to 13 years. Land Rover is not a reliable brand, so you shouldn't expect much from its lifespan. Some models are more reliable than others; however, you can get your Land Rover to last longer with proper maintenance and good driving conditions.

How expensive is it to fix a Land Rover?

The cost of maintaining a Land Rover is quite expensive. It costs an annual average of $1,174 to maintain your Land Rover car. This is slightly higher than the $1,127 cost for all full-size luxury cars.