Kia Telluride vs Sorento: Which Is a Better Value? 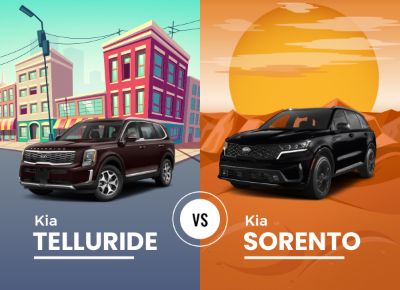 Kia has been on a winning streak lately, particularly with their SUVs. The big, three-row Telluride continues to earn heaps of praise from journalists thanks to its luxury aspirations and everyday price. The new Sorento tries to follow the same philosophy, down to the three rows of seating.

So what’s the difference between the two? And is the pricier Telluride really worth the extra coin?

It turns out there are more than a few differences between these two three-row crossovers, but as to which is better, that’s tough to say. 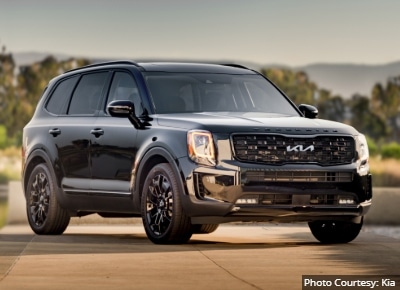 You don’t need a measuring tape to see that the Telluride is the bigger vehicle. It rides on a longer wheelbase, has more than a half-foot of additional length, and is wider and taller to boot. It’s firmly a full-sized SUV.

The Sorento is more of a mid-sizer, but it does a fine job of making the most of its smaller footprint. In fact, it might be more space-efficient than the Telluride when it comes to passenger comfort. Just look at the legroom figures: it’s the same for the first two rows, and in the third row, the Sorento only trails the Telluride by a mere inch. Considering the size difference between the two crossovers, this is impressive.

Cargo space is clearly more of the Telluride’s forte. It has nearly double the room behind the third row and boasts an extra eight cubes available behind the second row. With all the seats down, the Telluride holds 87 cubic feet to the Sorento’s 76 cubes.

The Takeaway: The Telluride is the bigger, roomier crossover. Yet the Sorento is probably big enough for most families and requires little, if any, sacrifice in comfort or space. 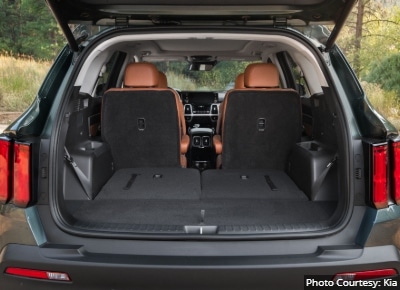 Five years ago, no one would have imagined these interiors would be found in a Kia product. Stylish materials, an attractive and ergonomic layout, and a chic, contemporary vibe are part of the deal with both crossovers.

The Telluride is especially nice. Its look and feel is a near facsimile of what’s found in the German competition, and we’re sure some Audi owner somewhere is blushing at the likeness between their Q5 and this Kia. Even up close, the comparison holds - there is heft in the controls and a thoroughness in the overall execution. Much of the hoopla over the Telluride stems from the elegance and quality of this interior, something that can only be fully understood once experienced firsthand.

The Sorento takes a different angle, with its rather blocky, upright cabin design reflective of its more outdoorsy and rugged aspirations. You’ll notice that of these two crossovers, only the Sorento offers anything resembling an off-road package - and the interior reflects that philosophic difference. It isn’t inferior to the Telluride - everything still evokes a sense of careful craftsmanship - but it simply takes a different approach. We think it works.

The Takeaway: The Telluride aims for luxury, while the Sorento is more adventurous. Two distinct approaches that each appeal in their own way.

The Telluride keeps things simple: every model is powered by a 291-horsepower 3.8-liter V-6. It’s punchy and powerful, and good enough to tow 5,000 pounds of camper or boat. An excellent eight-speed automatic sends power either to just the rear wheels or all four.

The Sorento, keeping with its mission and price point, starts things off with a plain four-cylinder that makes 191 horsepower. You can get this same engine in turbocharged form, where it makes 281 horsepower. In both cases, an eight-speed automatic is used. Front-wheel drive is standard; all-wheel drive is available.

The Sorento also recognizes the current push to reduce emissions with an available 1.6-liter hybrid option. This smaller turbocharged engine gets mated to an electric motor.

Clearly, these two crossovers take two very different approaches to propulsion. Which is better? Hard to say, honestly. The Telluride’s 3.8-liter V-6 leaves little to be desired thanks to its ample power. The one thing we do pine for? Better gas mileage. The mere 19 mpg city and 24 mpg highway just doesn’t cut it in this era.

The Sorento rectifies that across the board: even the hard-working base engine returns 23 mpg in the city, and the more powerful turbocharged version will get nearly 30 mpg on the highway. Oh, and the hybrid? An EPA-rated 35 mpg city and 39 mpg highway.

The Takeaway: The Telluride’s one-size-fits-all V-6 is great - except for fuel economy. The Sorento offers a trio of options that appeal to a variety of buyers, but don’t plan on towing more than 3,500 pounds. 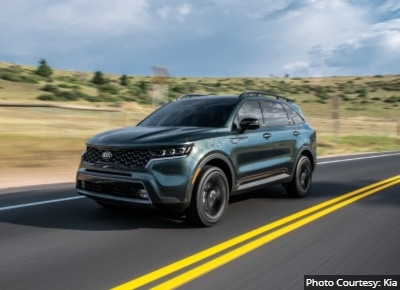 The Telluride and Sorento both get Kia’s Drive Wise suite of active-safety features as standard equipment. Bundled into the package are features such as automatic emergency braking, lane follow assist, lane departure warning, and lane-keep assist.

Optional features on both models include a blind-spot camera system, a surround-view camera, and a safe exit assist.

Both the NHTSA and IIHS have had a chance to sling a Telluride into a wall, and the results were promising: both organizations awarded their highest ratings to the big SUV for nearly every test they threw at it. The Sorento was equally lauded by the IIHS, but the government only gave it four out of five stars overall.

The Takeaway: Both crossovers come with an impressive array of features, but the Telluride goes above and beyond with its lengthy list of safety tech. Crash-test scores are nearly a draw, but the NHTSA wasn’t as confident about the Sorento as they were with its bigger brother. 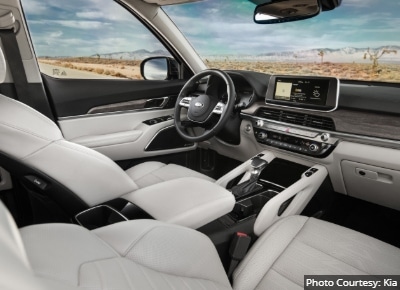 This, ultimately, is what it comes down to: which crossover is the better value for your lifestyle and budget? For many, the answer will probably be the Sorento. It starts at about $30,500 after destination, which is $4,000 less than a base Telluride - a substantial saving. It’s easy to bundle a few features into the Sorento and still come in right around where a base Telluride begins.

On the high end of the price scale, however, the scales level out. The Telluride’s top trim costs just under $44,000. The Sorento’s top trim? Just $200 less. At that point, both crossovers share a highly similar list of standard features - yet the Telluride is bigger, more powerful, and more capable. At that point, there’s little reason to not step up.

Yet we can’t negate long-term running costs with the more efficient Sorento. The big disparity in fuel economy makes the thriftier Sorento a tempting choice; the hybrid is especially enticing with its upper-30s mpg in all instances. And with three rows of seats and a large cabin, it is just as useful as a family hauler.

The Takeaway: The bigger, more powerful Telluride is the one to get if you’re shopping the top trims. But if you're worried about fuel economy or are looking at more modestly-equipped models, the Sorento is the better value.

So Which Is Better - the Kia Telluride or Kia Sorento?

As we just mentioned, it really comes down to budget, priority, and use case. Trying to pinch pennies and don’t really care about towing capacity? Get the Sorento.

On the other hand, what if you want the last word in affordable luxury? A Telluride with all the goodies is the clear answer.

Which is better, the Kia Telluride or Sorento?

It really comes down to budget, priority, and use case. Trying to pinch pennies and don’t really care about towing capacity? Get the Sorento. On the other hand, what if you want the last word in affordable luxury? A Telluride with all the goodies is the clear answer.

What does the Kia Telluride compete against?

Is the Kia Telluride bigger than the Sorento?

Yes. The Telluride is a half-foot longer, two inches taller, and an inch or two wider. That leaves it the roomier of the two - though by not as much as you might think.

Which has better fuel economy, the Kia Telluride or Sorento?

The Kia Sorento's hard-working base engine returns 23 mpg in the city, and the more powerful turbocharged version will get nearly 30 mpg on the highway. Oh, and the hybrid? An EPA-rated 35 mpg city and 39 mpg highway.