Key Stuck in Ignition (What To Do About It) 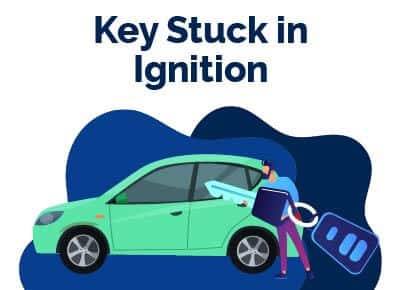 Getting a stuck or non-functioning key in the ignition is a common problem that most people can quickly resolve.

However, this isn't the same as a broken key, which occurs when the key head gets broken when trying to turn it. To remove the damaged portion of the key, you'll need to use a pair of needle-nose pliers.

New vehicles have evolved beyond the need for a physical key. Nowadays, most cars have electronic entry systems that allow you to start your vehicle without needing a physical key. However, some still need a working key.

Why Is My Key Stuck in Ignition?

There are several factors responsible for his anomaly. These are some of them:

1. Your Car's Running in Accessory Mode

Most cars with hard keys have an accessory mode that allows you to activate various features, such as the radio, without the vehicle being turned on.

The activation feature usually occurs by pressing the key one-click past the Off position. It is impossible to remove the key when it is in this mode.

2. Your Car Is Not in Park or Neutral

If the parking gear is not set correctly, you might be unable to remove the key from the ignition.

In most cars with automatic transmissions, the vehicle must be parked in the park position before the ignition can be turned on.

If you have a manual transmission, try shifting the shifter to neutral. This will allow you to remove the key from the ignition.

If you repeatedly hear a clicking sound while turning the key, your car's battery might be dead. This can prevent you from adequately removing the key.

4. Your Ignition Cylinder Is Defective

The internal mechanisms of the ignition cylinder can eventually fail due to wear and tear. If this issue persists, you might be unable to remove the key from the ignition.

5. There Is Debris on Your Key

If you have a defective or damaged key, debris can collect and prevent it from turning on the ignition.

If you have a new key, minor imperfections might cause it also to get stuck in the ignition.

What To Do When Your Key Gets Stuck in the Ignition

If your key gets stuck in the ignition, you might be able to pull it out. However, you should avoid trying to force the issue if it won't come out quickly.

These are three things to do if your key gets stuck in the ignition:

Most cars have a mechanism that prevents you from removing the key if the steering wheel is moved too far to the right or left.

To unlock this feature, you must first turn the wheel in the opposite direction.

To remove the key, use your left index finger to push it down. On the other hand, you can also use your right hand to jiggle the key to loosen the pins and springs inside the cylinder.

Before you can remove the key, make sure that your car is in neutral or park.

However, there may be times when it doesn't recognize that you are neutral or parked. To solve this issue, try gently shaking the gear selection.

Check your vehicle's fault codes using an onboard diagnostics tool known as an ODB2. This will allow you to identify if there's a problem with the shifter or fuse.

You can also use an advanced scanner to check for trouble codes on your vehicle's ignition switch and immobilizer.

Most modern cars, such as those made by Japanese and American companies, have an extra lock switch that can be used to turn the ignition key freely.

Again, consult your owner's manual to ensure you have all the necessary information.

After failing the following steps, it's time to contact your mechanic. They will most likely be able to identify the cause of your issue and come up with a solution to fix it.

For example, you might have a problem with your ignition lock or your immobilizer, which requires replacing or re-engineering after it's integrated with the switch.

How Much Does It Cost To Replace an Ignition Lock Cylinder?

The ignition lock cylinder is an integral part of your car. Without it, your vehicle will not start. Some newer models feature a keyfob to replace this component.

The average cost of replacing an ignition lock cylinder is around $237. This is an estimate based on the vehicle type and regions.

The labor rate ranges from approximately $45 to $90 an hour, depending on the area.

On the other hand, parts cost around $40 to $180, depending on the manufacturer.

Confidence that your keys will still work is essential, especially if this component fails.

If you accidentally break the lock cylinder, you might have to spend more money to fix it.

What Happens When You Leave Keys in the Ignition?

It's also important to remember that you should always put your keys in your purse or pocket as soon as you turn off the engine.

If you leave your keys in the ignition after turning off the engine, the drain on your car's battery might increase over time.

Although it's unlikely that the key will damage the car's battery in good condition, the drain will add up over time.

Aside from the battery, there are other reasons why removing the keys from the ignition is essential.

Doing so can prevent you from accidentally locking your vehicle and attracting a thief.

What To Do If Your Key Breaks in the Ignition

If you have a broken key in the ignition, you have two options: hire a professional or use an essential extractor tool.

An essential extractor tool can be used to remove the broken part of the ignition.

On the other hand, working with a professional can ensure that the fractured part is properly taken out.

Before you put your keys in the ignition, ensure they're in good condition. If they're dirty or damaged, it's possible that they could break off altogether.

How Often Do Ignition Lock Cylinders Need To Be Replaced?

The recommended replacement for the ignition lock cylinder is not listed on the vehicle's mileage. A factory defect can cause most failures.

Although ignition lock cylinder failures are standard, most vehicles won't require a replacement. However, a straightforward thing to prevent them is to keep your keys clean.

The cost of replacing an ignition lock cylinder can vary depending on the make and model of the vehicle.

In addition, installing anti-theft devices and airbags can also add to the cost.

Can You Leave the Key in the Ignition While Pumping Gas?

Never leave your car running while you're at the gas station. Doing so can generate static electricity and heat that can cause an explosion or fire.

So, removing your keys from the ignition immediately after you pull up to the pump is essential.

Also, ensure your vehicle is in park mode before you start filling up. Doing so will prevent you from accidentally leaving the car running while you're at the gas station. In addition, it can help keep the vehicle safe from theft.

Even though it's unlikely to fuel fires, you should turn off all 12-volt power sources, such as phones, cigarette lighters, and charging equipment.

Can Leaving the Ignition on Cause Damage?

Although it's generally safe to leave your vehicle running while running a quick errand at the store, certain levels may be hazardous. This is because a mechanical issue could result in problems.

If you're still holding the ignition key in the start position, it can damage the starting motor's components.

This is because the clutch only manages to transmit power in one direction.

The car's engine is powered by the power delivered through the flywheel, which then spins the flywheel to crank up the vehicle.

If you leave the ignition key on for an extended period, the charging mechanism will continue to operate, potentially causing the engine to overheat.

One of the most common reasons for having a stuck ignition key is the lock mechanism on the steering wheel.

This feature can prevent the key from being removed or turned from the ignition switch. Sometimes, this issue could be caused by a damaged or worn key lodged in the switch.  Removing the key by pulling it could damage the ignition and prevent it from working correctly.