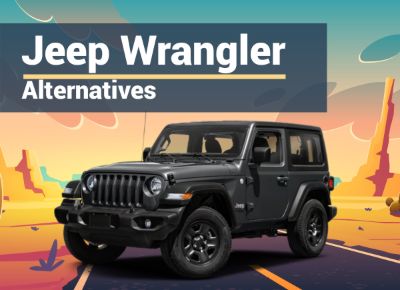 Those looking for off-road adventure, or an all-weather SUV that can do it all, should really start with the Wrangler line.

The Wrangler line is so good and has evolved to such a degree that it is hard to find fault with the modern Jeep.

So, unlike some of our other lists, this one is more for those Jeep lovers who really just want to know what else is out there.

The Takeaway: The Jeep Wrangler is the original. However, there are some worthy old and new competitors to this legend worth considering. 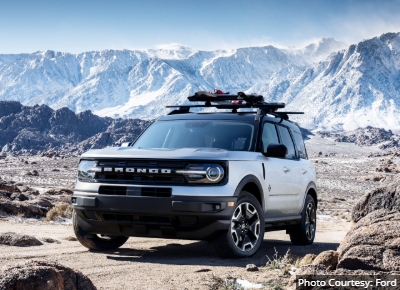 When Ford opted to challenge the Wranger line from Jeep, it didn’t use half-measures. The new Bronco line includes seven distinct trims, all with many options. Ford even added a smaller, more affordable sibling for the Bronco called Bronco Sport, which has become one of our all-stars in the “Best Of” series we create here.

If you want a direct competitor to the Jeep Wrangler, the Bronco is the ticket. One unique aspect of the Wrangler Rubicon was its ability to disconnect the front sway bar for more suspension articulation in ridiculous situations. The Bronco has that, and it can be disconnected under load, not just ahead of obstacles.

Like the Wrangler, you can strip the Bronco to be a skeleton and it has the cool removable roofs. Ford even used the same roof material supplier. Want to take off the fenders too? Go right ahead. Ford makes it easy.

The Takeway: If you want a head-to-head competitor to the Jeep Wranger Line, the Bronco is it. 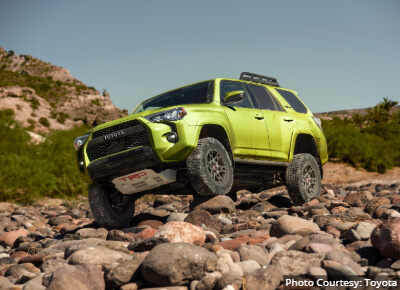 If there has been one area in which the Wrangler has demonstrated a need for improvement it is reliability. Check out Consumer Reports’ ratings for the Wrangler, and you will find only ⅕ and ⅖ ratings. One is the worst possible score. By contrast, the Toyota 4Runner earns only ⅘ and 5/5 scores year after year. If you want an off-road SUV that tops the field in reliability, start with the Toyota 4Runner.

The 4Runner also has enjoyed a long legacy of outstanding resale value. Jeep’s Wrangler and the 4Runner have traded the top spot for a decade. Both are highly valued in the used vehicle market. Presently, used versions are selling for as much or more than new ones.

The 4Runner is also very capable off-road. Its TRD Pro series is the one for the most enthusiastic off-roaders, but all of the 4Runners are rugged body-on-frame SUVs.

The Takeaway: Like all Toyotas, the 4Runner is the value and reliability alternative. 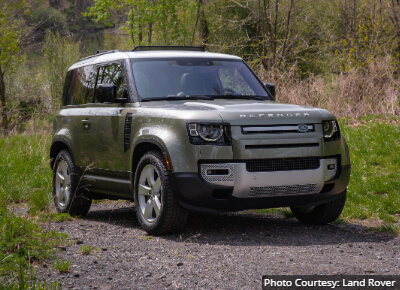 There was a time when comparing a Jeep Wrangler to a Land Rover was silly because the Land Rover was twice the cost. No more. The top trim Wrangler is now danger-close to $90K. Land Rover’s new Defender is priced right in line with the Wrangler today.

The Defender also offers similar engine options to the Jeep. Land Rover offers a supercharged V8 with more horsepower than the Jeep’s to give the Wrangler 392 owners something to aspire to. Land Rover even offers a green trim, just like Jeep does.

Like the Bronco, the Defender is reborn. And like the Bronco, it is much more expensive this time around. This is the toughest off-roader model from a brand known worldwide for making great off-roaders. If you want a Wrangler competitor that you won’t see parked two rows deep at every trailhead, start with Land Rover’s Defender.

The Takeaway: Land Rover is one of the few brands with as much gravitas as Jeep off-road, and its Defender is the real deal.

You may qualify for deals and incentives, check out this month's Land Rover deals and average prices paid. 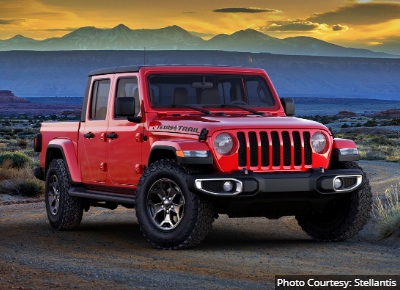 What if you really want a Wrangler but need a pickup truck as well? Jeep has answered your prayers. The new Gladiator has been out for two years and is building legions of fans. In our testing, we found it to be so Wrangler-like, even Wrangler owners gave us the Jeep wave as we drove towards them.

Although the Gladiator is not identical in its construction to the Wrangler, only die-hard Wrangler fanatics will see the differences. This pickup has pretty much the same formula as the Wrangler does, but with a pickup bed. We could keep typing, but that’s the scoop.

The Takeaway: If you really want a Wrangler but need a short pickup bed, you should buy a Gladiator.

You may qualify for additional deals and incentives, check out this month's Jeep deals and average prices paid.

What competes with the Jeep Wrangler?

The Ford Bronco, Toyota 4Runner, and the Land Rover Defender all use the same great recipe as the Jeep Wrangler.

Jeep owners say so. In Consumer Reports surveys of Jeep owners, the Wrangler consistently scores near the low end of the range. Ironically, the Jeep Gladiator, a pickup version of the Wrangler, scores a perfect 5.

Is Buying a Jeep Worth it?

Yes. Jeeps deliver on their promise of off-road excellence, fun, and real-world utility. Jeeps also have held their value as well as any other model traditionally.

The closest match to the Jeep Wrangler style-wise is the Gladiator pickup from Jeep. From the front, they are nearly twins.