Honda Pilot vs. Toyota Highlander: Which One Works Best For Your Family? 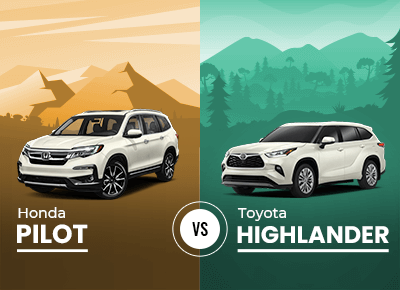 The three-row crossover SUV segment is hot and getting hotter. Two vehicles that define the segment include the Toyota Highlander and the Honda Passport.

Both offer optional all-wheel drive and are excellent choices for those seeking a family vehicle with all-road and all-weather capability.

We won’t decide which of these two vehicles is best for your needs, but using our experience having driven and tested both of these popular models, we won’t hesitate to point out which is better in certain areas.

Honda Pilot vs. Toyota Highlander - Which Is Bigger? 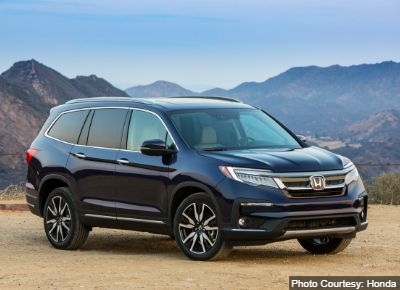 We suspect many shoppers are thinking ahead to being able to park the Pilot or Highlander in their garage and be able to manage downtown parking in a normal size space. To that end, we created the chart above to help us see objectively which of these vehicles offers the most real-world space.

The Pilot from Honda is the larger of the two vehicles in every possible way. However, is the size difference meaningful? As the owner of a first-generation Highlander with a much smaller interior, I can attest that the available space works well for little kids, even with grandparents in the second row. So, for occasional duty, the Highlander’s three rows of seating are adequate for most families’ needs.

However, if you plan to use all three rows on most days, the Pilot has an advantage here. Yet, that begs the question, if you want roomy seating in all three rows, why stop at the Pilot? Why not a Chevy Suburban? The reason is practicality. The Highlander is two and a half inches narrower than the Pilot, which means it will back into your garage that much more easily.

Having widened the third row a bit in their current generations, both of these industry leaders can now fit three across in that row. Coupled with a three-seat bench in the middle, each can accommodate up to eight passengers.

However, we should add a dose of reality to this story. Many trims and much of the inventory that the two brands send to dealers are configured with a two-seat middle row. These captain’s chairs are a popular choice for families who most often have only two occupants in the back. 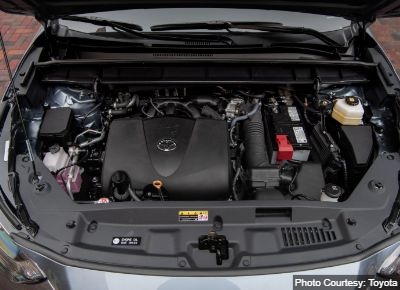 Both the Pilot and Highlander offer buttery-smooth, satisfyingly strong V6 engines. They are powerful enough for towing, passing, and more than ample for anyone’s daily needs.

However, the Highlander offers buyers a very interesting option. Toyota has a hybrid engine that offers dramatically better fuel economy with very little sacrifice. There is no meaningful power sacrifice in normal driving. The hybrid engine in the Highlander is satisfying around town or on the highway. However, it’s not as silent as the V6. 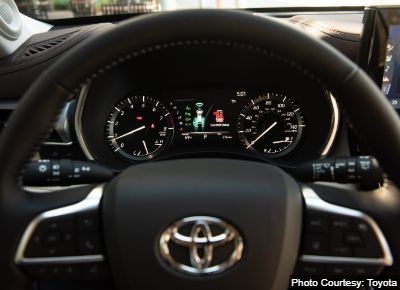 The significance of Toyota’s hybrid powertrain is hard to overstate. Over the 20-year lifespan of the vehicle, the highlander will save its owner $14,000 compared to the Honda Pilot on fuel costs. That is a third of the total vehicle cost. How does one overlook this benefit?

To make the decision more compelling, Toyota also offers a novel electric AWD system that we have tried and found to be outstanding. Toyota has a special option here that Honda does not offer. Toyota reports that fully 40% of Highlander buyers opt for the hybrid powertrain, and it is available on multiple trims. Toyota has offered hybrids for three generations of Highlanders, and they have proven to be ultra-reliable. 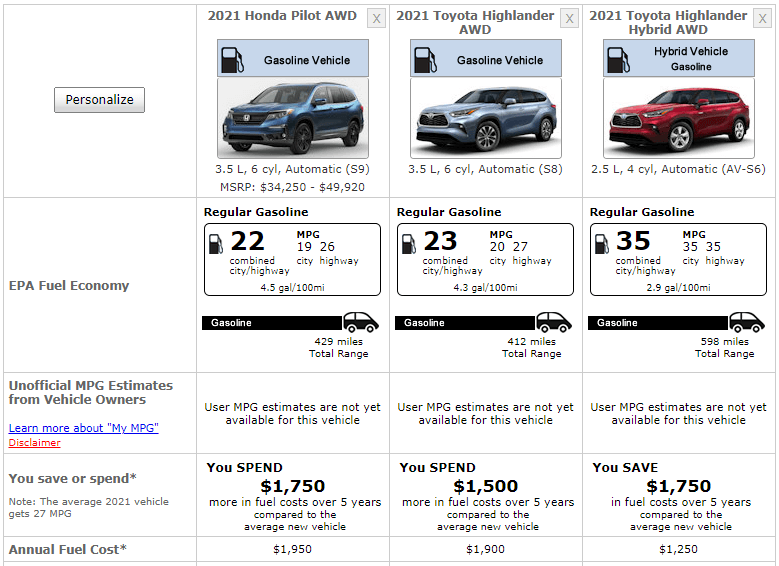 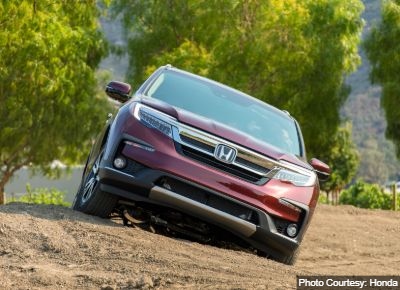 The Toyota Highlander earns the industry’s highest score of Top Safety Pick Plus from IIHS. By contrast, the Honda Pilot does not earn any award from IIHS because of a lower score on an important crash test. The Highlander also earned higher crash prevention scores than the Pilot did in IIHS tests.

Both are safe choices by comparison to other vehicle types, but the Highlander has the edge in safety, something most families consider an important factor when selecting a three-row crossover SUV. 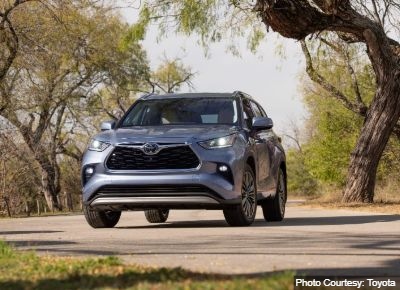 The Honda Pilot’s base trim with front-wheel drive starts at just under $34K. The Toyota Highlander with the same basic setup has a price of $36K. The very top trim of both models are priced near $50k.

Both vehicles offer the same 3-year/36K mile comprehensive and 5-year/60K mile powertrain warranties. However, Toyota also throws in Toyota Care, a two-year included maintenance package we feel has a value of about $500, and the Hybrid trims have a much longer warranty on all the hybrid parts, including the hybrid battery.

The pricing and value of the Highlander and Pilot are so similar that we feel incentives and dealer discounts may be the more important factors on purchase day. 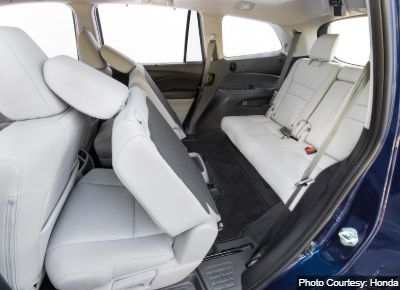 Our analysis finds that the Honda Pilot offers more interior space, more passenger space, and more third-row legroom than does the Highlander. However, the Highlander is a bit easier to park in a garage. Both offer excellent V6 engines, but the Highlander gives buyers a choice to opt for a hybrid powertrain that will save owners a whopping $14K over the life of the vehicle. Finally, while both vehicles have a track record of safety, the Highlander outscores the Pilot in IIHS testing.

There is no wrong choice when considering the Honda Pilot vs. the Toyota Highlander. Both offer a very satisfying ownership experience and are packed with features targeted at making family life easier. Which vehicle is right for your needs will come down to your personal priorities.

Which is bigger, the Honda Pilot or Toyota Highlander?

The Honda Pilot is slightly larger than the Toyota Highlander in every way. The Highlander is a bit more compact giving it a slight advantage when parking.

Which is safer, the Toyota Highlander or Honda Pilot?

For 2021, the Toyota Highlander earns the industry’s highest safety award, the Top Safety Pick Plus from IIHS. The Honda Pilot scored lower on both a crash test and a crash-prevention test.

Which has better fuel economy, the Honda Pilot or Toyota Highlander?

The Toyota Highlander Hybrid offers a much higher fuel economy of 35 MPG than the Pilot. Equipped with their standard V6 engines, both the Pilot and Highlander have a similar annual fuel cost.

Which is more reliable, the Honda Pilot or Toyota Highlander?

Consumer Reports ranks the Toyota Highlander higher than the Honda Pilot for reliability for the new 2021 model year and the 2020 and 2019 model years.