Honda Civic vs Honda Accord: Which Sedan Is Best? 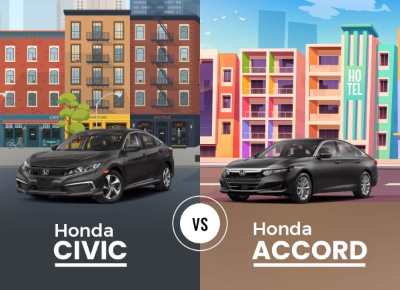 Even when not at the top of the list, the Accord has routinely been among the bestselling cars in the United States, even as sedans have lost market share to sport utility vehicles.

The Honda Civic has never been the bestselling car in the United States, but as its popularity has grown over the past few decades, it has become the stronger selling sedan.

The Honda Civic and Accord are similar enough that you might have a hard time picking one, so we have broken down all of the key aspects of each one. For this discussion, we are focusing on non-hybrid volume models, so we aren’t looking at the Accord Hybrid or the Civic Si.

Honda Civic vs. Honda Accord Comparison 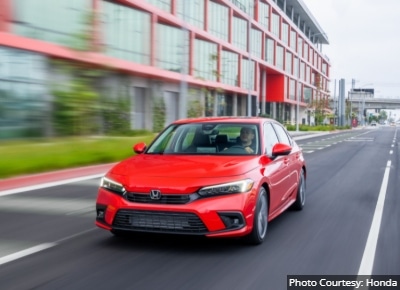 The key difference between the Honda Civic and Accord is their size. The Civic competes in the compact class commonly referred to as the “C segment” while the Accord is a midsize sedan, competing in the “D segment”. The two even share a basic design language, but there are some key differences in the measurements.

The Accord is 13 inches longer, around 2 inches wider, and about 1.5 inches taller, so if you spend lots of time driving in tight city situations, the Civic may be a bit more comfortable for you. Of course, the added size of the Accord leads to advantages in interior space, but the differences aren’t as big as you might expect. The Accord offers just two-tenths of an inch of extra front and rear headroom, and the front legroom measurement is identical for the two Honda sedans. The most significant advantage for passengers comes in the rear legroom, where you will find three more inches in the Accord, and the Accord also has almost two more feet of cargo space in the trunk.

The Takeaway: If you want a smaller car for driving in tight city spaces or crowded parking garages, the Honda Civic is the better choice. If you want more interior space – even though the difference is minimal – the Accord is the better pick for you. 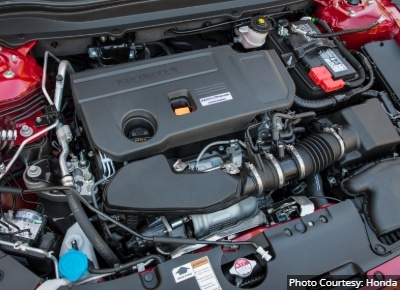 The Honda Civic and Honda Accord share an engine, but they also have unique engines that you won’t find in the other. Front-wheel drive is standard on all new Honda Civic and Accord models.

The standard engine in all non-hybrid Honda Accord models except for Touring is the turbocharged 1.5-liter 4-cylinder, similar to the premium engine in the Civic, but in the larger car, it gets a higher output of 192 horsepower and 192 lb-ft of torque. Accord Sport buyers can also opt for a turbocharged 2.0-liter 4-cylinder with 252 horsepower and 273 lb-ft of torque, standard in the Accord Touring. A CVT is standard with the 1.5-liter engine, but the Accord with the larger engine comes with a traditional 10-speed automatic.

The Takeaway: If you want the most power, the Honda Accord has an edge, even over the Civic with a similar turbocharged engine. The Accord also has the advantage of the traditional 10-speed gearbox and big power, but for those who want the best fuel economy, the turbocharged Civic is the best pick. 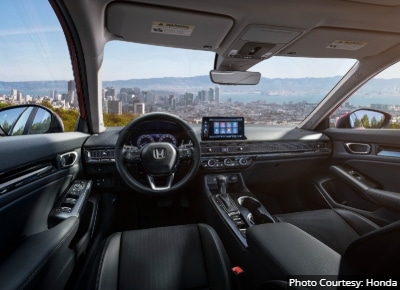 The list of standard and optional equipment surprisingly differs a great deal between the Honda Civic and Accord.

The “base” Honda Civic LX comes with a 7-inch touch screen infotainment system and a 4-speaker sound system. The Civic Touring comes standard with a unique 9-inch touch screen system and a Bose 12-speaker sound system with a subwoofer, along with a 10.2-inch driver information screen. Every new Civic comes standard with automatic climate control, power windows, power door locks, push-button start, and cruise control. Cloth seats with manual adjustment are standard in EX, Sport, and LX models, while Touring models get leather seats with power adjustment up front.

Every new Honda Accord comes standard with an 8-inch touch screen infotainment system with Apple Car Play and Android Auto integration, multiple smartphone interface points, and Bluetooth connectivity.  All new Honda Accord sedans come with a 7-inch driver information screen. Every new Accord also comes standard with dual-zone automatic climate control, power windows, power door locks, push-button start, cruise control, and multiple power points throughout the vehicle. In the Accord LX, cloth seats with manual adjustment are standard, but all other trim levels have power adjustment for the front seats.

The Takeaway: The Honda Accord comes with a larger infotainment screen on more models, but the Civic has the advantage of the 9-inch screen, the larger driver information screen, and the premium Bose sound system. If you want the most technology in your new Honda, the Civic Touring is the clear choice. 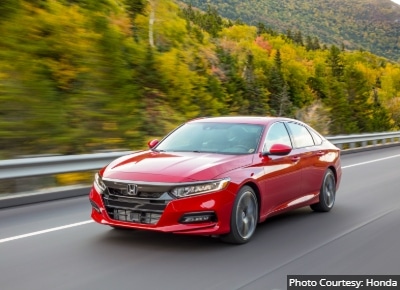 The Takeaway: Honda is known for having very safe vehicles and that is clear with both the Civic and Accord. The safety features and scores are nearly identical, with the only real difference being the Civic’s Traffic Jam Assist system – giving the smaller Honda sedan the edge in this category. 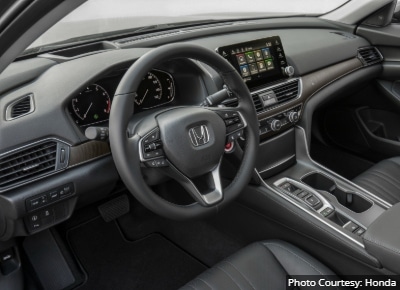 The Honda Civic LX has a starting price of $23,365, including the $1,015 destination fee while the Sport starts at $24,765 and EX starts at $26,365. If you want leather or the premium infotainment bits, the Civic Touring starts at $29,965 and while we say “starts at”, that price includes all of the key features. There are a few options, such as the All Season packages or the HPD performance exterior appearance package, while the bigger infotainment screen, the bigger driver information screen, and the Bose sound system are all included in the price.

The Takeaway: There is no way around the fact that the Honda Civic costs far less than the Accord. Even when the Civic is loaded with features that you cannot get in the Accord, the smaller car still costs quite a bit less. The Accord packs more power and offers more space, but it comes with a pretty significant price increase.

Which is bigger, the Honda Civic or Honda Accord?

The Honda Accord is bigger than the Civic inside and out, but the interior advantages are minimal.

Which has better fuel economy, the Honda Civic or Honda Accord?

The Honda Civic offers better fuel economy than the Accord with a similar turbocharged 1.5-liter engine.

Which has more interior space, the Honda Civic or Honda Accord?

The Honda Accord offers more passenger and cargo space than the Civic.

Which offers better performance, the Honda Civic or Honda Accord?

The Honda Accord with the turbocharged 2.0-liter engine mated to a traditional 10-speed automatic transmission offers better performance than the Civic.