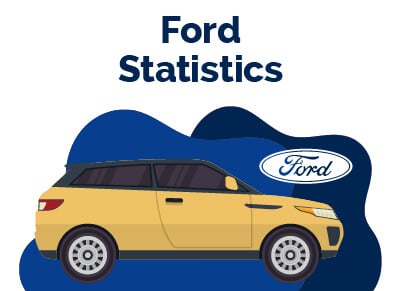 Every new year holds an interesting story for the automotive industry. 2020 and 2021 weren’t the best years for the industry; 2022 came with a global shortage of chips, supply problems, and disruptions in builds and configurations; Ford Motors is not exempted from the fluidity of the industry.

Ford started by producing a car with a max speed of 30mph, but since then, it has held impressive statistics in car sales and reliability.

There are lots of interesting statistics about Ford that you should know, like the consistent growth in their annual revenue since 2020. The small car company that started from a converted wagon factory has constantly ranked as the best-selling car in America with the Ford F-series.

Here’s a detailed overview of Ford statistics and important details you should know.

Ford Statistics and Important Things You Should Know

Ford records some amazing stats in its finances, cutting across its revenue, income, and sales. The number of cars sold by Ford varies in different regions, just as the sales volumes vary in different years.

This greatly impacts Ford’s revenue, overall sales, and net income during these periods.

From the statistics, it is obvious that Ford sales dropped in 2019/2020. One of the major factors that influenced its fall was the wake of Covid-19. Ford isn’t alone in decline in sales and revenue for automobiles during that period.

You must understand that Ford’s operations are not limited to car sales. Ford Motor Co business segments include:

No brand in the automobile industry is excluded from the competition. There is always rivalry in the system in different categories, sales, the launch of electric vehicles, reliability, and overall brand performance. Ford Motors’ biggest competitors are General Motors, Volkswagen, Kia, Dodge, Toyota, Honda, Nissan, Mitsubishi, Hyundai, and SAIC Motor.

Volkswagen is Ford’s biggest competitor, with a revenue of $290.2 billion. Toyota takes the second spot with $272.3 billion, and Daimler nets $193.3 billion, taking the third position. Although Ford comes fourth with $156 billion amongst the top 10 car brands in revenue and profits, the marginal differences between the other car brands on the list are competitive.

Employee welfare has been a stronghold for the Ford company. During the early days of Ford, the company increased its employee’s pay to $5 a day. The goal was to ensure that workers were not just surviving but also living.

Ford was one of the first companies that advocated for a five-day workweek, signing the first-ever UAW-CIO contract in 1941.

Currently, Ford has up to 183,000 employees across 61 Ford plants in different countries. This is with 32 plants located in North America.

Ford has a good line of acquisitions and brands attached to its name. With the inclusion of Lincoln and Troller, other brands are attached to the Ford parent brand, Ford Motor Company.

These brands all play a great role in the growth of Ford, with individual strengths in different areas. For instance: The acquisition of Journey Holding, which has two tech companies, Ride systems and Doublemap Inc, gives Ford total access to its mass transit coordination.

This includes fleet management, granting users access to a smartphone app they can use to schedule and track their rides.

Journey Holdings deploys its workforce, working with TransLoc, which was initially acquired to deploy a better digital means of transportation for Ford users.

Ford is the second-largest automaker in the United States of America, sitting as the world’s fifth-largest car brand based on global sales. The coverage and market penetration of Ford varies across different countries. Just as US and China have Ford’s largest sales, there is less Ford coverage in Russia and India.

Ford is even making plans to pull out of Russia. With the sale of 49% of its Sollers Ford Joint Venture sales, Ford is finalizing its exit from Russia. The suspension of Ford operations following the Russian invasion and internal conflicts with Ukraine.

Unlike Tesla, Ford doesn’t sustain a direct sales approach. They work with dealerships. There are over 9,618 Ford dealers in the world.

What are Five Interesting Facts About Ford?

Is Ford on the Decline?

Yes. Ford is on the decline. The revenue drops and fluctuation in sales indicate that Ford is declining. This is visible in its 27% drop in the sales of Ford’s F-series in September 2021, amounting to an overall 13% decline.

There is also a drop in sales in certain markets like India and Russia. Ford’s decline is contributed by many factors, including global shortage of chips, lack of strategic positioning, and inability to explore deeply outside US and European markets.

Ford is not doing badly as a company. They hold an impressive reliability rating and resale value. Customers are assured that they are buying cars that will last, with fewer worries about major maintenance and repairs.

To many people, this is great news. As long as the company matches customer satisfaction, a lot of users do not care about the statistics.