Ford Ranger Vs. Chevrolet Colorado: Which Midsize Truck Is Best? 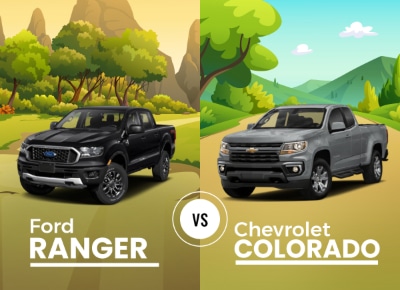 If you're shopping for a midsize pickup, the Chevrolet Colorado and Ford Ranger are the two most popular options from American automakers.

With these two vehicles being so sought-after, you might have a tough time deciding which midsize American truck is right for you.

To help with your decision, we have taken a look at how the Ford Ranger and Chevrolet Colorado size up to each other. 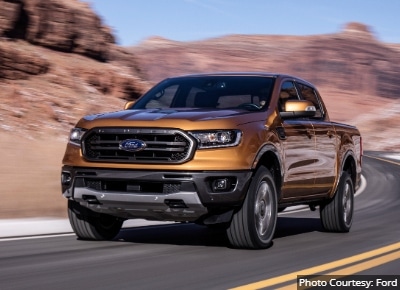 Both of these midsize trucks are offered with multiple cab and bed options. The Chevrolet Colorado comes with either the 2-door extended cab with a 6-foot bed or a 4-door crew cab, which includes the buyer’s choice of a 5- or 6-foot bed. The Ford Ranger comes with either the 2-door SuperCab with a 6-foot bed or the 4-door SuperCrew with a 5-foot bed. Both trucks are equipped to seat up to 5 people.

The most popular configuration for these two trucks is their 4-door, short bed layout and for our comparison, we are excluding the lower volume Colorado ZR2 and Ranger Tremor models. The Ranger is a bit smaller than the Colorado, so it will be easier to fit in tight parking situations. The Ford sits higher, so overhead clearance is less of an issue for the Colorado, but the Ranger has the ground clearance advantage when driving over rough surfaces or debris.

Takeaway: The Ford Ranger is smaller front-to-rear and side-to-side, making it a better option for driving in tight city spaces while also offering more cargo space in the bed. 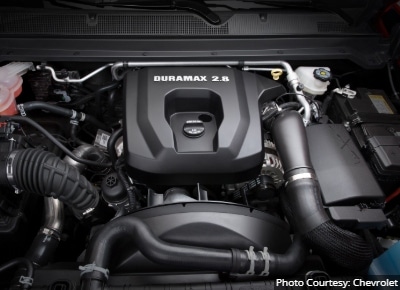 The Ford Ranger is currently offered in the United States with only one engine – the 2.3-liter EcoBoost turbocharged 4-cylinder with 270 horsepower and 310 lb-ft of torque. That engine comes standard with a 10-speed automatic transmission, with the buyer’s choice of rear- or four-wheel-drive.

When properly configured, the Ford Ranger can haul up to 1,818 pounds and tow up to 7,500 pounds. In rear-drive form, the Ranger is rated at 21 mpg around town and 26 on the highway, while four-wheel-drive models are expected to get 20 mpg on the city and 24 on the highway.

The Chevrolet Colorado is available with three engines and two different automatic transmissions. The base engine is a naturally aspirated 2.5-liter 4-cylinder. The most powerful engine in terms of horsepower is the naturally aspirated 3.6-liter V6 with 308 horsepower, while the strongest Colorado engine in terms of torque is the turbocharged 2.8-liter diesel with 369 lb-ft of torque.

When properly configured, the Chevrolet Colorado will haul up to 2,268 pounds and tow up to 7,700 pounds, due to the powerful diesel engine of the Chevy. The diesel engine is also the most fuel-friendly in the lineup.

Takeaway: If you are focused on the most capabilities or the most fuel economy, the Colorado with the diesel engine has a clear advantage. 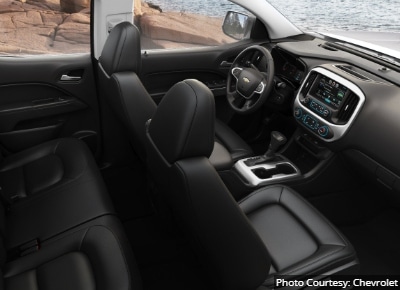 At the same time, all trim levels of the Ranger come standard with FordPass Connect with a 4G LTE WiFi Hotspot, but that is not standard on the base Colorado, so there is some give-and-take with the interior tech on these two midsize pickups at the lower price point.

When loaded up, these trucks both come with heated leather seats with power control, premium sound systems, navigation, and the other common niceties that come in modern pickups. While the features may vary a bit by price point, the interior features of these two trucks match up very closely when you check every box.

There is no other way to interpret the measurements but to recognize that the Chevy offers more passenger space and interior cargo space.

Takeaway: If you want more interior space, the Chevy is the easy pick, but beyond that, personal preference on the overall layout will play a big role in picking the better cabin. 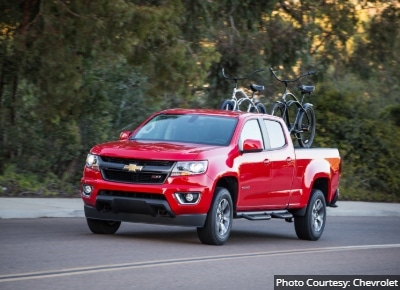 Optional safety features on the Colorado include lane departure warning, Onstar Connected Services, and rear parking assist. The Ranger can be upgraded with the Technology Package, which adds adaptive cruise control and a forward-sensing system.

The Ford Ranger and Chevy Colorado both received a 4-star overall rating from the NHTSA.

Takeaway: The Chevrolet Colorado and Ford Ranger has the same standard safety features and scored nearly identical with the NHTSA – with the Ranger proving to be slightly safer in a frontal crash test. 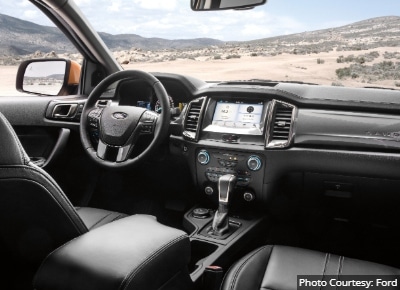 With destination and acquisition fees, the base Ford Ranger XL SuperCab with rear-wheel-drive has a starting price of $26,910 while the same truck with four-wheel-drive starts at $30,765. When you add other premium features, such as the features of the 501A popular equipment group, the Bed Utility Group, and the Trailer Tow Group, the price rises to $43,770.

The Chevrolet Colorado WT Extended Cab with rear-wheel-drive has a starting price of $27,025 with the naturally aspirated 2.5-liter engine. That engine makes for a gross comparison to the EcoBoost in the Ranger, so for a proper comparison, the 3.6-liter V6 makes more sense. The base WT rear-drive truck with the V6 starts at $27,880 while the 4WD version starts at $31,780. When you add the turbocharged diesel engine, the Z71 climbs to $43,690. When you add in some normal options such as the Bed Guard Package, navigation, and the Bose sound system, the price climbs to $44,890 when well-appointed.

Takeaway: The base Ranger costs thousands less than the base Colorado, even though the Ford comes with the vastly superior EcoBoost engine. When you begin loading the two trucks up in premium trim, the Ranger still has the advantage in price.

Which is bigger, the Ford Ranger or Chevrolet Colorado?

The Chevrolet Colorado is slightly bigger in length, but the Ford Ranger offers a bit more space in the cargo bed.

Which has a higher towing capacity, the Ford Ranger or Chevrolet Colorado?

The Ranger and Colorado are pretty close, but the Colorado has the edge in towing capacity.

Which has more power, the Ford Ranger or Chevrolet Colorado?

The Chevrolet Colorado has a bit more engine power and max payload capacity due to the optional diesel engine. It is one of three engine choices for the Chevy Colorado.

What other vehicles compete with the Ford Ranger and Chevrolet Colorado?

The Ford Ranger and Chevrolet Colorado compete in the midsize pickup class with trucks including the GMC Canyon, the Toyota Tacoma, and the Nissan Frontier.

What are the best-selling models in the midsize pickup class?