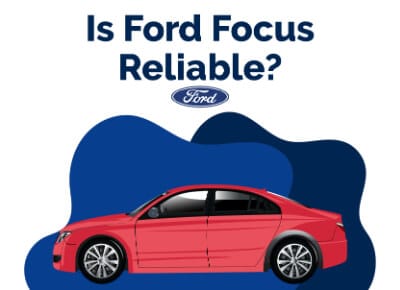 Ford Focus started with an impressive reliability rating of 4.0 out of 5.0, ranking 27th out of 36 compact cars. This is before dropping low to the 72nd position out of 75 vehicles reviewed for reliability, a significant setback for the Ford Company. But is Ford Focus reliable?

Ford Focus is a reasonably reliable car dangling on reliability charts across different years. Ford Focus 2012 and 2014 ranked 13th and 14th in the 20 worst cars to drive. This was too low for an economical and budget-friendly vehicle.

However, there have been some improvements in newer Ford Focus models for years. JD Power gives the 2018 Ford Focus a Reliability score of 76/100; this is an impressive score against the 2012 model, which has a low score of 58/100.

The Institute for Highway Safety (IIHS) rates Ford Focus as a good car with improved crash and safety ratings. You can rely on the Ford Focus for decent gas mileage, low maintenance cost, and an impressive design.

Ford is a reasonably reliable car. Not as good as you may expect, Ford Focus is not one of the favorite cars that we will recommend for reliability.

Although Ford Focus ranked as the 4th best-selling car in Britain in 2020, the reliability of the Ford Focus doesn’t match its fame.

We can confirm that the drop in Ford Focus reliability rating is because of the ongoing power shift transmission problems and the numerous problems synonymous with different production years.

With the series of backlashes trailing the Focus brand, you should note that it has received a lot of impressive safety ratings. From IIHS to the Euro NCAP, Ford Focus is considered one of the best cars with good safety features.

Ford Focus won’t give you the taste of a fast car, but you will surely enjoy a fun ride. With a Ford Focus, you are sure of fewer visits to the repairman, quiet passages, better handling, and cheaper maintenance and repair cost.

Here are four significant areas of reliability of Ford Focus:

You can always rely on Ford Focus's safety features. The Focus brand has won an impressive five-star rating from Euro NCAP and a “good car” rating from IIHS, all on safety and driver’s protection.

The Ford Focus car is fitted with excellent safety features and technology.

Some of the safety features of the Ford Focus include:

Ford announces that the Focus brand is built to withstand at least 40% extra load in the event of a front impact.

This gives the car an impressive 85% adult protection and 87% child-occupant safety. All indications prove that Ford’s Focus is one of the safest Ford cars.

Ford Focus boasts of one of the most comfortable, impressive designs and high-quality interiors that Ford has ever released. Ford Focus is “fun-to-drive,” but this doesn’t come at the expense of driver’s safety.

Ford Focus features bolstered seats, accommodating seats, spacious room to stretch your legs, comfy fittings, and a 13.2 cu-ft cargo area that gives enough space to stash in your luggage. The cargo area space will differ for different years and models.

These cars have an adaptive suspension that makes it fun to drive through bumps. Ford Focus introduces a ride technology that allows drivers to switch through comfort, track, and sport modes.

Ford Focus has technological support designed to make it easy to keep the car in the center lanes. The steering gives a great feel that makes twisting and rotation easier.

Ford Focus is a popular model. It is one of the cheapest compact cars on the market. Although Ford discontinued the production of the Focus due to “high demand” and the inability to meet the needs of users, we are more concerned about the numerous problems that the Focus comes with.

You must note that a lower reliability rating doesn’t mean the vehicle is terrible. Ford Focus can serve you differently, but not as much as you expect on reliability.

Which years are the worst to buy a Focus?

Which Ford Focus engine is the best?

Is Ford Focus expensive to maintain?

Ford Focus is not expensive to maintain. The average yearly repair and maintenance cost for Ford Focus is $569. This is cheaper than the average $652 for compact cars.

Do all Ford Focus have transmission problems?

Which Ford Focus is most reliable?