Why Your Car Engine Power Is Reduced 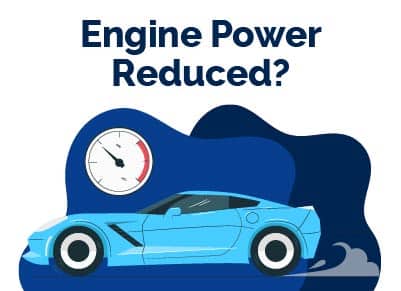 Modern cars are more like computers than trucks or even cars. They're incredibly advanced and have sensors and computers that can control various aspects of your driving experience.

While it's essential to make sure that the car is as safe as possible, it's also necessary to remember that anything that can upset the balance of the various sensors and modules in the vehicle could cause a fault.

Let’s look at the possible reasons why your engine power is reduced and what to do about it.

What Does the Reduced Engine Power Warning Mean?

A system failure usually triggers a reduced engine power warning. The computer then informs the driver about the issue and suggests that the vehicle might not be able to operate correctly.

The reduced power warning can prevent the car from moving and can also prevent you from accelerating.

In some cases, the computer will restrict the fuel flow to the engine, leaving you with a vehicle that won't run.

Some people refer to this type of warning as a fail-safe mode, but it's referred to as the limp mode because it allows the driver to drive safely and avoid further damage to the car.

Bad engine sensors are often the cause of the reduced power warning. These include the oxygen sensor, the throttle body, and the component known as the MAF.

In addition, a clog in the catalytic converter might be the issue.

Since different factors can cause a reduced power warning, it's important always to check the car's various parts.

One of the easiest ways to determine what's causing the reduced power warning is by using an electronic vehicle diagnostic tool known as an OBD2 scanner.

This will allow you to check the codes stored in the system. These are the most common causes:

The oxygen sensor is an essential component of the car responsible for monitoring the amount of oxygen coming out of the system.

If there's too much O2, the computer will reduce the air-fuel ratio to balance the performance.

When a faulty sensor is sent back to the computer, it can cause the computer to make adjustments that are not necessary.

This can lead to poor performance and increase the risk of the vehicle experiencing reduced engine power.

All the car's major components are connected to wires. Therefore, if a short or damaged wire is detected in the electrical system, the vehicle might be in a fail-safe mode. This issue can also occur if the ground wire is not secured correctly.

Although it's usually easy to fix a loose connection, it can be hard to find. Therefore, a full inspection of the car's electrical system is also essential to find the issue.

The engine control unit is the central component of the car's operation. It's responsible for making necessary adjustments to improve the car's performance.

For example, if the air-fuel mixture is incorrect, it can affect the car's performance.

When the car's engine control unit stops working, it can cause various problems.

These can lead to poor performance and increase the risk of the vehicle experiencing reduced engine power.

The throttle body is also a component responsible for controlling airflow into the engine.

If the butterfly valve gets damaged, it can prevent the proper amount of air from being delivered to the car.

This can lead to issues with the operation of the vehicle's engine. If the car can't get enough air, it will sputter and misfire, which can cause warnings on the dashboard.

The throttle position sensor is the other important component responsible for controlling airflow into the car.

This device, located near the butterfly valve, reads the position of the gas pedal to the computer and informs it when it's time to open the valve.

The catalytic converter is located near the exhaust manifold. This component is designed to convert harmful exhaust gases into cleaner and less toxic substances.

Unfortunately, if the car's engine has been running correctly or the vehicle is old, the catalytic converter might become damaged.

This issue can result in the vehicle failing an emissions test and experiencing various engine performance issues.

Although it won't always light up the Reduced Engine Power warning, it can still light up the Check Engine Light.

The mass airflow sensor is near the intake manifold and the air filter. It measures the pressure and density of air that's entering the engine.

The data collected by the mass airflow sensor is then sent to the computer to apply the appropriate fuel ratio.

Unfortunately, if the data transmitted by the sensor is not received correctly, the warning lights might come on.

Getting stuck in a transmission issue is not fun and can lead to various problems. For example, if the fluid level is low or the transmission slips, you might see an error message.

Although people might not think that a reduction in engine power is caused by transmission, it's important to note that these two systems are interrelated.

The cost of fixing a Reduced Engine Power Warning can range from $0 to $2,500, depending on the issue.

You can quickly reconnect without draining your pockets if you notice a loose connection between two components.

However, if you have to replace the catalytic converter or the electronic control unit, it might be a costly fix.

Avoid driving with the Reduced Engine Power Warning Light on. If the warning light is activated, you should immediately turn off the vehicle and get out.

If the other drivers are unaware of the issue, turn on the hazard lights to let them know you're experiencing it.

Can I Drive My Car with the "Reduced Engine Power" Warning Light On?

Although it's possible to drive while the light is on, this feature is referred to as "limp mode," and it's usually advised to operate the vehicle within reason.

In addition, the car won't be fun to drive, as acceleration will be poor, gas mileage will be excessive, and shifting gears will be jerky.

Some cars might also disable specific non-essential components, such as the radio.

Although driving while the light is on is possible, getting the car towed is usually advised if it's required to go further than a couple of miles.

What Should I Do if the "Reduced Engine Power" Light Comes On?

The first thing you should do is to try and drive the vehicle to a repair facility or back home. If you're already at home, do not attempt to drive the car.

Can I Fix My Reduced Engine Power Problem at Home?

The DTC will typically display the Reduced Engine Power light with a specific sensor or system in its memory that indicates an issue.

However, it's essential not to assume that the problem is related to a particular component or system.

Bad engine grounds can be the cause of the issue. This can affect the wires and other components that connect the various sensors and actuators to the ECM.

A bad ground connection can cause the vehicle's voltage and current to drop, affecting the car's drivability. To check the condition of the engine's ground connections, use a digital multimeter.

This will allow you to easily identify the components affected by corrosion or damaged connections.

What Do I Do if I Can't Fix the Reduced Engine Power Problem Myself?

Some issues that could cause your vehicle's reduced engine power are simple to fix.

However, before you panic, it's important to note that these issues can be easily solved by following a few basic steps.

Getting your car fixed by a professional repair shop can be a bit more expensive than if you decided to make the repairs yourself. However, the advantages of having them on hand are numerous.

Before hiring a professional mechanic, they will thoroughly inspect and identify the issue causing your vehicle's reduced engine power. They'll then provide a quote for the necessary repairs.

Sometimes, low oil can cause your car to lose its acceleration. This issue could be caused by the variable valve timing system, which relies heavily on the oil pressure to operate.