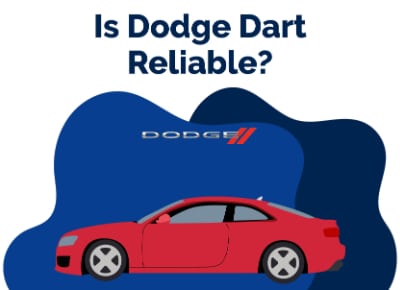 You would not expect that same high performance and wild burst of power from Dodge Dart as you would  from a high-end car or sports vehicle. They won’t deliver an enormous surge of power because they are just compact cars. But how reliable is the car? Is Dodge Dart reliable?

Dodge Dart is a reasonably reliable car! You can expect average handling, accommodation and cargo space, and performance.

However, you must go beyond numbers and ratings to understand how reliable a car it is. You must understand the factors that influence the reliability of a vehicle.

How Reliable Is Dodge Dart?

As I mentioned earlier, Dodge Dart is a fairly reliable car with ratings dangled across the years. Launched in 1960 and 1961, Dodge Dart is one of the vehicles that has upheld the glory of the Dodge company.

Starting as a “classic” intermediate-sized car, the Dodge Dart grew into a compact car. While the 4-door sedan model has been maintained, there are significant changes in the engines of these cars.

However, the series of upgrades and changes haven’t brought Dodge Dart to compete with other compact cars in the industry.

The truth remains that the Dodge car ranks 28th out of 36 compact cars and 26th out of 29 Dodge models. The Dodge Dart is cheap, but users have greater chances of encountering severe damage.

The 2013 Dodge Dart generated up to 1,200 complaints from users, filed and registered by the National Highway Traffic Safety Administration (NHTSA).

These complaints have lingered, with Dodge recalling some Dodge Dart models. This is an unfortunate tale for a promising car.

We might not list the Dodge Dart as one of our favorite Dodge models, but there are a few benefits that you will get from the car; fuel Economy, low maintenance and purchasing cost, and lots more. Unfortunately, Dodge stopped the production of Dart on January 27, 2016.

Why Dodge Dart Is Considered Reliable

Dodge Dart is underpowered when it comes to acceleration and speed, but some features make the engine remarkable.

Users complain that Dodge Darts have a low-speed/acceleration, but we would love to point out that these engines have proven more durable than their competitors. You might not achieve a hyper-delivery of speed, but you can rely on it to last long.

2. Cost of Maintenance and Purchase

One of the best things about Dodge Darts is that they are inexpensive. They are cheap to maintain and cheap to buy. You should consider a Dodge Dart if you need a good first car to get your teenager.

Dodge Dart has an average repair and maintenance cost of $597. While this is cheaper than the $652 average maintenance for all car models, it is slightly higher than the average $526 for compact cars.

Dodge Dart can pass as not just a compact car but also as a muscle car. The Dodge Dart car has enough technological upgrades to improve handling and driver control.

Because Dodge Darts are standard front-wheel drive vehicles, drivers are assured of increased grip and fantastic traction. This makes it easy to drive a Dodge Dart in the snow.

Dodge Dart features a ground clearance of 4.4 inches. This is not a good amount for mud rides, hills, or rocky terrains, but they are manageable for regular driving.

Dodge Dart models like the 2016 Dart boast 60 safety and security features. This is an impressive number that drivers can rely on.

Some popular safety and security features of Dodge Dart include:

These features are designed to uphold users’ safety without compromising comfort.

The Dodge Dart’s gas mileage depends on the engine used. For instance: the 1.4L Turbo 4-cylinder Dart engine achieves a fuel efficiency of 28/40/32 MPG for city, highway, and combined.

The 2.4L 4-Cylinder achieves a 22/35/27 MPG for city, highway, and combined. These values vary for automatic transmissions.

Dodge Dart drivers are constantly battling with the numerous problems that come with the car. Here are six common problems of Dodge Dart.

The reliability issues of Dodge Dart are tied to the year and model you purchase. 2013/2014 are one of the worst years of Dodge Dart, but you can expect some level of decency from the 2016 Dart models. 2016 is the year that Dodge Dart produced some of its most reliable cars.

Some drivers will advise that if you go for a Dodge Dart, you should choose the model with the largest 2.4L engine. You will have fewer drivetrain issues to deal with.

Are Dodge Darts good in snow?

Yes. Dodge Darts are good in snow and also good in most winter conditions. The Dodge Dart car achieves an impressive performance on snowy grounds because of the features and supports that it comes with.

How long will a Dodge Dart last?

The Dodge Dart will last up to 150,000 – 200,000 miles, with an average lifespan of 10-15 years. The truth is, you can expect your Dodge Dart to last forever. Your maintenance habit and driving condition will determine how long they will last.

Yes. Dodge Darts have manual and automatic options. You can choose between a manual transmission or an automatic one.