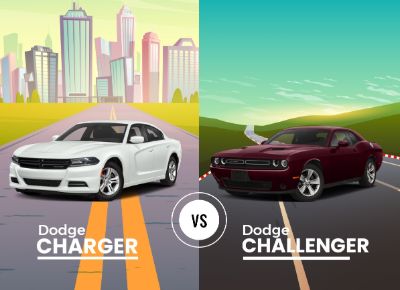 While the rest of the world starts to transition towards hybrid and electrified cars, Dodge is happily lost in its own world of honking V-8 engines, prodigious tire smoke, and old-school American muscle. The Charger and Challenger are the two models in their lineup that most effectively drown out the quiet whir of progress.

The names are close, the platforms are shared, the powertrains are practically one and the same. So what separates these two aside from the number of doors?

We’ve taken a closer look at the Charger and Challenger to better understand their similarities and differences. 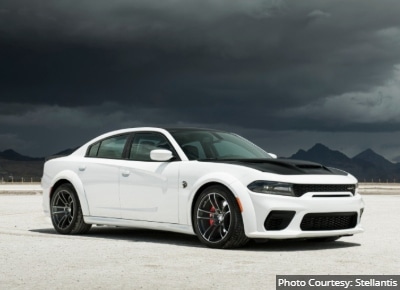 There’s no mistaking it: the Charger and the Challenger are both big cars. Riding a full-size platform that dates back to 2005, these cars harken to an era where crossovers were few and large sedans were still relevant.

The Charger utilizes a 120-inch wheelbase, while the Challenger is draped over a 116-inch wheelbase. Regarding the former, that’s seven whole inches longer than the Toyota Avalon’s wheelbase, which happens to be the only other full-size, non-luxury sedan left on the market.

The Challenger is equally supersized compared to its sporting competitors. Mustangs and Camaros are small and lithe, with wheelbases nearly a foot shorter than the Challenger. They also weigh hundreds of pounds less than the hulking two-door Dodge, which tips the scales at up to 4,500 pounds.

Inside the cabin, the story is much the same. Unlike most two-door cars, the Challenger has a usable back seat that features 33 inches of legroom - significantly more than the Camaro or Mustang. It also gets a trunk capable of holding over 16 cubic feet of cargo. These dimensions make this one of the most practical two-doors around.

The Charger is roomier still, with rear legroom of 40 inches and a trunk just as generously sized as its sportier sibling. Ample headroom and shoulder room are also part of the deal thanks to the generous dimensions afforded by the full-size platform these Dodges ride on.

The Takeaway: The Charger and Challenger are big, roomy vehicles any way you slice them. Both dwarf their respective competition. 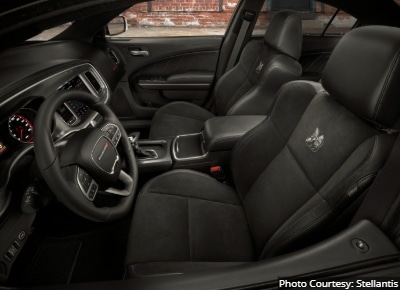 Wonder how Dodge can afford to sell a 470-horse sedan for about $40,000 even in this day and age? A look at the interior will quickly clarify things. The Charger is saddled with an interior that is depressingly somber and cheap-feeling. What’s maddening is that it has stood pat since the last refresh in 2015 - when the taxicab-basic design already felt outdated.

It isn’t just a small detail or two that irks us, either. Acres of uninspiring black plastic cover the entirety of the dashboard. Trim looks and feels second-rate. The available leather upholstery is the only appealing aspect of the cabin, but it can’t override the rest of the interior - especially that dashboard.

The Challenger is a bit better, largely thanks to a more driver-focused cockpit with a taller console and an angled dashboard. But it still suffers from the same cardinal sins of the Charger: cheap materials and an outdated design too reliant on ugly black plastic. Compared to the Mustang or Camaro, there’s little here that might sway buyers on the fence between these three American icons.

The Takeaway: Dodge has been printing money on these cars for years. Is it too much to ask for a bit more thought to be put into the interior design? 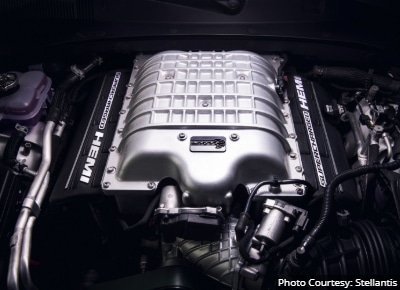 Here the Challenger and Charger are just about one and the same. Both offer the full gamut of Dodge’s V-8 engines, from the relatively tame 5.7-liter Hemi to the wildest, hairiest Hellcat.

This engine is the only way to get the available all-wheel drive for both the Challenger and Charger. At least for the Challenger, that’s a notable distinction - its competition is strictly rear-wheel drive.

Next up is a 5.7-liter V-8 that features 370 horsepower in the Charger and 375 horses in the Challenger. A six-speed manual is offered with the Challenger, while the Charger is strictly available with an eight-speed. These gearbox options carry through nearly every V-8 engine option.

More power and tomfoolery await with the 6.4-liter V-8, also known as the 392, for its cubic-inch displacement. Its 485-horsepower output is shared by both models.

Is that still not enough power? Then try on the 6.2-liter supercharged Hellcat models for size. In their tamest tune, these engines make either 707 or 717 horsepower depending on if you’ve opted for Charger or Challenger, respectively. In Redeye form, 797 is at your discretion. And for the final flourish, a Widebody option is also available.

The Takeaway: All the V-8 engines offer massive performance for relatively little money. Even if handling isn’t exactly their forte, these two Dodges promise endless fun. 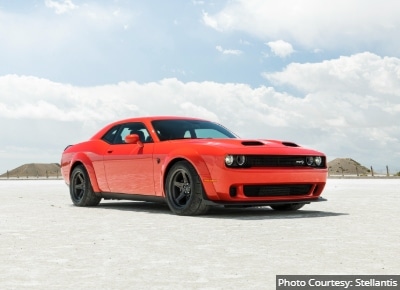 Did we mention the Charger and Challenger are dated? For proof, just look for the standard active-safety features. Actually, don’t bother, because you won’t find anything. Outside of rear parking sensors on the Charger, nothing of note comes standard on either model.

If you’re willing to pay for your safety gear, the Charger does offer adaptive cruise control, blind-spot monitors, lane keep assist, and automatic emergency braking, among other features. But you have to go beyond the base model to unlock most of this equipment.

The Challenger’s list of available safety features is even less extensive than the Charger. For starters, there’s no automatic emergency braking available for any amount of money - a rather strange omission, considering the similar Charger offers it. Other equipment like adaptive cruise control and blind-spot monitoring is optional.

Crash-test scores are a bit more promising. The NHTSA awarded the Charger five stars overall and the Challenger four stars. The IIHS did not name either model a Top Safety Pick, however.

The Takeaway: The Challenger and Charger are many things, but they are certainly not paragons of safety. 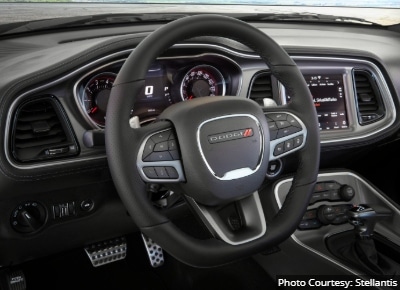 From a performance standpoint, the Charger and Challenger offer two of the best horsepower-per-dollar ratios in the industry. You’ll be hard-pressed to find more power for less money. In that sense, Dodge has democratized the big V-8 engine, which lately has been the exclusive purview of high-end automakers. As mainstream outfits drift away from such powertrain, these two Dodges remain as loud, proud holdouts of a different era.

The Charger is especially notable. Not only is it a sedan - a body style whose sales are flagging in the face of crossovers and SUVs - but it’s a full-size sedan at that. And yet, for a segment that was long ago written off as uncool, the Charger is anything but geriatric. Its hyper-aggressive styling and roster of V-8s are anything but mainstream and buyers have responded in kind. While Toyota seeks to kill off the Avalon next year, the Charger remains a fan favorite among enthusiasts.

Among sports cars, the Challenger has a tougher go of it. After all, the current crop of performance coupes has set the bar impossibly high - well-rounded vehicles like the new Mustang Mach 1 or Toyota Supra prove that power, theatrics, and handling can all coexist in the same car. Among such competition, the Challenger should struggle - it’s dated, technologically behind, and prefers straight lines to curves.

Yet somehow, it continues to thrive, selling better than the Camaro and often the Mustang as well. Why? Because it’s perhaps the most usable of any sports car. The big back seat and trunk offer space for adult passengers and full-size suitcases. Commuting is comfortable thanks to the plush seats and long wheelbase. Even winter is no issue, thanks to available all-wheel drive on the V-6 models.

The Takeaway: These two outdated Dodges should have been made pariahs by the marketplace. Yet buyers continue to line up for them thanks to their unmatched charisma, performance, and practicality.

Which Is Better, the Charger or Challenger?

If you’re looking for a cool coupe that can double as a weekend toy and regular commuter, the Challenger is the way to go.

The Charger is the better family vehicle on account of its slightly better safety ratings and equipment and the extra space of its four-door body style.

What are some of the Dodge Charger's competitors?

At this point, not much. Most of its competition is dead, leaving just the related Chrysler 300 and the about-to-be-euthanized Toyota Avalon.

Is the Charger faster than the Challenger?

Yes, if you can believe it. The fastest Charger Hellcat beats a Challenger Hellcat to 60 mph by 0.3 seconds.

Is the Challenger reliable?

Yes. Its powertrains and platform have been around for years at this point, which means all the kinks have long been worked out. Consumer Reports ranks the Dodge Charger near the top of its list of reliable sedans.

Are the Charger and Challenger all-wheel drive?

Yes, if you order the V-6 and check the box for the optional all-wheel drive. Otherwise, all models of both vehicles are exclusively rear-wheel drive.