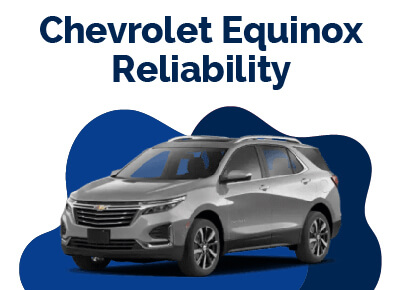 The Chevrolet Equinox is a good compact SUV with a spacious five-seater interior, a good infotainment system, and standard safety features.

It's also comfortable to drive on uneven grounds, and it's easy to maneuver around town.

Unfortunately, Equinox doesn't perform well against other competitors despite its features. Its engine performance, cargo space, and interior quality are all average. But is Chevy Equinox Reliable?

Well, the simple answer is that Chevy Equinox is reliable, but there are other things you need to know about Chevy Equinox reliability, which we will discuss below.

Although it doesn't perform well against other competitors, the Chevrolet Equinox is still considered reliable.

According to RepairPal, Chevy Equinox has a 3.5 out of 5 rating, which is good enough for 23rd place in its class. On the other hand, J.D. Power gave the vehicle an 85/100 rating for reliability and quality.

U.S. News & World Report states that the 2021 Chevrolet Equinox is the 11th-best compact SUV in its class.

It's believed that regular maintenance and careful handling can keep the vehicle running smoothly for a long time.

Why Is Chevy Equinox Considered Reliable?

The following are possible reasons why the Chevy Equinox is considered reliable;

The interior of the Chevrolet Equinox is often criticized due to its overall appearance and feel. While it's good to have a well-built cabin, it doesn't feel upscale compared to the newer models from Nissan and Hyundai.

Its soft-touch surfaces also help minimize wind and road noise at higher speeds. Despite the criticisms, the interior quality is still superb.

The Equinox's most important advantage is its in-car entertainment system, a good 8-inch or 7-inch touchscreen with multiple features and buttons.

These features make it easy to use and navigate. Although it isn't the flashiest setup, it works well nonetheless.

The standard infotainment system of the Equinox includes a 7-inch touch screen, Bluetooth, and Apple CarPlay. It has many other features, such as a six-speaker stereo and USB ports.

These include a navigation system, an eight-inch touchscreen, and a seven-speaker audio system. It also comes with two USB ports.

This makes it ideal for storing bikes, camping gear, and bulky items such as tools from the hardware store.

If you're looking for a more spacious vehicle, consider the other compact models, such as the Subaru Impreza, Honda CR-V, and Hyundai Tucson.

The Chevrolet Equinox is a two-row compact SUV with five seats. Its front seats are supportive and soft, and there's plenty of room for both adults and children.

However, the rear seats aren't as comfortable. There's still plenty of room for three kids or two adults to sit comfortably in the back.

The standard features of the Chevrolet Equinox include a manually adjustable front seat and cloth upholstery.

It can also be upgraded with heated and ventilated front seats, a heated steering wheel, and leather upholstery.

The Equinox also has two sets of LATCH connectors for its rear seats. These are easy to use, though the other hardware might be confusing for other parts.

The Chevrolet Equinox has various engine options, including a 1.5-liter four-cylinder that produces 170 horsepower and 200 pound-feet of torque. It can also be equipped with a six-speed automatic transmission.

Unfortunately, the small engine doesn't provide the necessary power to get the Equinox up to highway speeds.

It also struggles to motivate the vehicle when passing other cars on long inclines. The transmission is partly responsible for this issue, as it often slows downshifts when needed to improve acceleration.

However, this figure drops to 25/30 miles when upgraded to all-wheel drive. It's bested by the Nissan Pathfinder, Toyota Rav4, and Ford Escape.

The Chevrolet Equinox is a pleasure to drive vehicle. Its smooth ride and quick steering are ideal for everyday driving.

Its suspension also helps keep the vehicle stable and prevents it from getting hit by bumps. The 19-inch wheels on the R.S. models are also more responsive.

The Chevrolet Equinox is predicted to have a reliability score of 85 out of 100. According to a study conducted by J.D. Power, the vehicle is considered the best in its class regarding reliability.

The Chevrolet Equinox comes with a three-year/60,000-mile limited warranty. Its powertrain warranty is also extended to five years.

The base model of the Chevrolet Equinox L.S. starts at $25,800. It features various standard features, such as a seven-inch touch screen, Bluetooth, and a six-speaker audio system. Other standard features include a rear-seat alert, a manual liftgate, and LED headlights.

The Chevrolet Safety Assist package, which is standard on the base model, also comes with various features. These include forward collision warning, automatic emergency braking, and lane keep assist.

The top-of-the-line model, the Chevrolet Equinox L.T., starts at $26,900. It adds a power-adjustable driver's seat, navigation, and other features.

Other standard features of this trim include a heated front seat, a power liftgate, a remote start, and adaptive cruise control.

The Chevrolet Equinox R.S. comes at $30,100 and adds various features. These include a blind spot monitoring system, a power liftgate, and a rear cross-traffic alert.

Other standard features of this trim include a leather-covered steering wheel and a seven-speaker audio system.

What Year Equinox Had Engine Problems?

In 2005, Equinox was still in its initial year. Many owners reported having blown head gasket issues with their 3.4-liter V6 engines.

This usually happens when one or both of the head gaskets gets damaged.

Is a Chevy Equinox Expensive to Repair?

The cost of repairs and maintenance for the first 10 years of Equinox's life is $8,616, which is better than the average for SUVs. It also has a 26.15% chance of experiencing significant issues during that period.