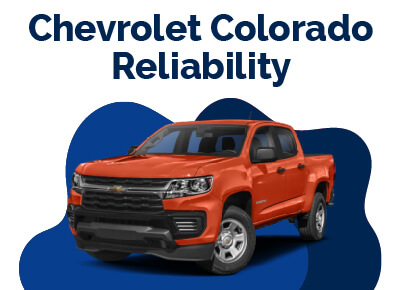 Chevy Colorado midsize pickup trucks are often regarded as one of the best in the world due to their fuel-efficient design and convenient features. But is Chevy Colorado reliable?

J.D. Power rated the Chevrolet Colorado as reliable, with an 82 out of 100 reliability score.

It also has a rating of 4 out of 5 based on data from RepairPal. The average cost of repairs for a Chevrolet Colorado is around $599.

The article covers everything you need to know about Chevy Colorado reliability and many more.

According to RepairPal, the Chevrolet Colorado is among the top four midsize pickup trucks in the world regarding reliability.

The average cost of repairs for this model is around $600, which is $50 more expensive than other cars and trucks.

Most Colorado owners bring their vehicles in for unscheduled repairs about 0.2 times a year, with a 13% likelihood of experiencing a severe issue.

Chevrolet Colorado comes with a three-year basic warranty and a five-year powertrain warranty.

Why Chevy Colorado Is Considered Reliable

The following are reasons why the Chevy Colorado is considered reliable;

The base model of the Chevrolet Colorado comes with a 200-horsepower four-cylinder engine. It can be upgraded to a more powerful V6 or a turbo diesel with a power output of over 180 horsepower.

Although the four-cylinder engine is fine for city driving, the Chevrolet Colorado is slower and less capable of handling.

The V6 and turbo diesel engines are better options, as they give the vehicle more power and are smooth. Also, the diesel allows Colorado to tow more than its class rivals.

The Chevrolet Colorado gets good gas mileage with the base V6 and rear-wheel drive. Its ratings are similar to those of the V6, with the former coming in at around 19 miles per gallon in the city and 25 miles per gallon on the highway.

The Chevrolet Colorado is capable of handling extremely well regarding truck driving. Its ride quality is impressive, as it doesn't lean much and feels balanced on corners. Its suspension also helps deal with road imperfections.

The Chevrolet Colorado Z71 and ZR2 models are the ones to consider if you're looking for a vehicle that can handle a lot of off-roading.

These two trim levels have various features, such as a heavy-duty suspension system and a locking rear and front differential.

The ZR2 and ZR2 Bison models are better suited for off-roading than the Z71. If you're looking for something more capable of handling than the Toyota Tacoma or the Jeep Gladiator, these are the vehicles for you.

The towing capacity of the Chevrolet Colorado varies depending on the engine it's equipped with. When equipped with a turbodiesel engine, it can tow up to 7,200 pounds, which is tied for the class lead.

On the other hand, V6 models can tow up to 7,000 pounds. The base model of Colorado is also well below the other two models, allowing it to achieve a maximum towing capacity of 3,500 pounds.

The payload capacity of the Chevrolet Colorado is subpar for the class, as it can haul up to 1,550 pounds.

The specific towing capacity of each model varies depending on the engine used. Also, the drivetrain and cab combination affect the rating.

Despite its lack of driver assistance features, Colorado has plenty of infotainment tech. Its infotainment system, which is known as the Infotainment 3, is easy to use and has a touch screen that's easy to reach.

The standard features of Colorado's Infotainment 3 include a 7-inch touchscreen, Bluetooth, and two USB ports. It also comes with Apple and Android Auto, satellite radio, and a six-speaker audio system.

The infotainment system of the Chevrolet Colorado is also available with a variety of features. These include a wireless device charging hub, a seven-speaker audio system, and a USB port.

The extended cab version of the Chevrolet Colorado features a 6-foot-2-inch long box, which is longer than the other compact pickup models. The Crew Cab models come with a 5-foot-2-inch short box.

The Chevrolet Colorado also comes with various features, such as a rear step built into the corner of the rear bumper and a pair of hand grips attached to the bed rails.

The front seats of the Chevrolet Colorado are comfortable and provide ample head and legroom. The driver also has a good view of the road. Both extended cab and Crew Cab models come with five seats.

The rear seats of the Chevrolet Colorado are also comfortable. Both extended and Crew Cab models have an upper and lower tether for the middle seats.

The Chevrolet Colorado is predicted to have a reliability score of 82 out of 100 based on the various factors affecting its longevity. A score of 91-100 is considered the best, while a score of 70-80 is considered average.

The NHTSA gave Chevrolet Colorado four out of five stars in its various tests. It performed well in the side crash test and the frontal crash test.

How Many Miles Do Chevy Colorado Last?

The Chevrolet Colorado is expected to have a lifespan of around 200,000 to 300,000 miles depending on the maintenance.

What Year Is the Most Reliable Colorado?

The 2020 Chevrolet Colorado was named one of the most dependable compact pickup vehicles in Consumer Reports' history. Its owner satisfaction score was also higher than other models.