Chevrolet Tahoe vs GMC Yukon: Which Is the Best GM SUV? 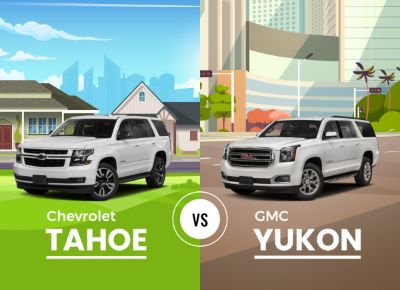 In the SUV world, the Chevrolet Tahoe and GMC Yukon are literal and figurative heavyweights. This pair throws shadows that could darken a city block and have the sales numbers to make the rest of the segment green with envy. What’s more, both of these SUVs are built by General Motors.

Because they feature the same parent company, the Yukon and Tahoe are more similar than they are different. But does that mean they’re equal? Not quite.

We’ve hashed out the differences to see if we could declare one of these twins a victor. 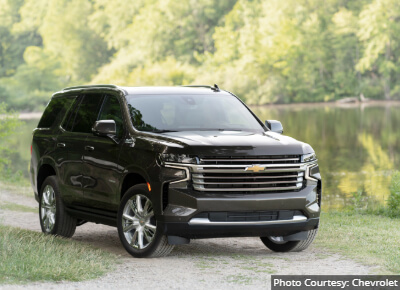 These two SUVs don’t differ much when it comes to dimensions and size. Both ride on the same platform, a genuine body-on-frame chassis that uses a 120.9-inch wheelbase in standard-length variants and a longer 134-inch wheelbase for the stretched models (Suburban for Chevy, Yukon XL for GMC). Stylistic differences between the Tahoe and Yukon account for a mere 0.7-inch difference in length.

Inside, both feature equally similar specs: 178 cubic feet of total passenger volume and 123 cubic feet of total cargo space. Third-row legroom is expansive on both, but the Tahoe is actually the roomier of the two at 36.7 inches, versus the Yukon’s 34.9 inches. Why the discrepancy? We’d imagine it has to do with seating position or seat design, which may differ between the models. Either way, these are some impressive figures for a third row, which is typically too cramped for adults. That clearly isn’t the case here. 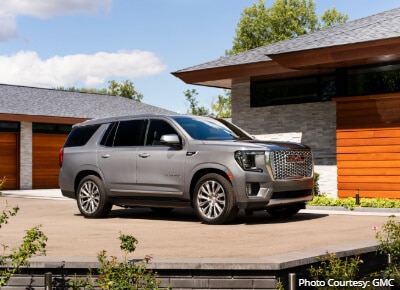 Not much to report here. These SUVs are big, practical boxes with an emphasis on square lines and hard angles. Function comes before form on these SUVs, but GM did a nice job differentiating their fascias - it’s the most unique the Yukon and Tahoe have ever looked. Both represent their respective brands much more confidently than their predecessors.

While we appreciate the Chevy’s new front end, the look is a bit heavy-handed - it doesn’t have the elegance of the Yukon, which uses squared-off C-shape lenses that work nicely with the SUV’s blocky shape.

Otherwise, styling is pretty much a draw between these two SUVs. 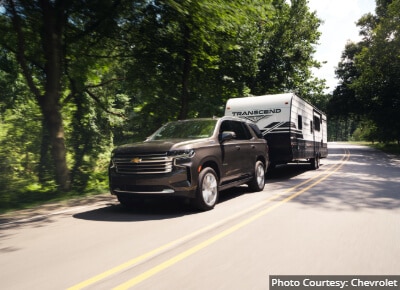 Because both SUVs share major hardware, there really aren’t any noteworthy differences between the two regarding performance. The standard engine on both models is a 5.3-liter V-8, which gets subbed out for a 6.2-liter V-8 in top-shelf variants. The former engine makes 355 horsepower and 383 lb-ft of torque; the latter churns out 420 horsepower and 460 lb-ft of torque.

Both SUVs also get an optional turbocharged diesel inline-six. This 3.0-liter motor only has 277 horsepower, but it compensates with 460 lb-ft of torque - which astute readers will note is a ringer for the 6.2-liter’s torque output.

The diesel sounds like it would be a peach for those who tow, but the most powerful engine in that regard remains the 5.3-liter V-8, which can tow up to 8,400 pounds when properly equipped. Diesel models max out at 8,100 pounds - which, it should be said, is actually more than the standard gas engines not enhanced with the optional trailer towing package. 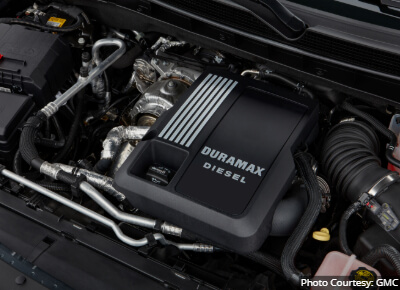 Here again, the two SUVs are essentially one and the same. With the small V-8, buyers can expect 16 mpg city, 20 mpg highway, and 18 mpg combined. Opting for the 6.2-liter V-8 means an EPA-rated 15 mpg city, 20 mpg highway, and 17 mpg combined. Notably, fuel economy on the highway doesn’t suffer for those who spring for the bigger engine, something we credit to the excellent 10-speed automatic transmission that backs both powertrains.

Diesel models, however, are the most efficient of the bunch: they return up to 21 mpg city, 27 mpg highway, and 23 mpg combined. These are stellar figures for three-ton SUVs that can tow formidable amounts of weight and haul eight passengers in comfort. With the massive fuel tanks on these rigs, you can also expect a driving range of well over 700 miles with the diesel, a boon for those all-day road trips. 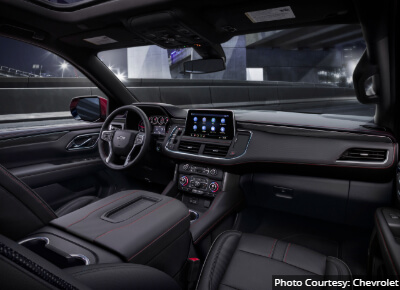 This is one area in which the Yukon differs from the Tahoe. The Chevy only comes standard with rear parking sensors, automatic high beams, and standard automatic emergency braking with forward collision warning; the Yukon goes well beyond that by further including lane departure warning, lane-keep assist, blind-spot monitoring, and rear cross-traffic alert. Those additional standard features on the Yukon are available on the Tahoe for $2,820 on most trims up until the Premier, where they are finally made standard.

On the Yukon, buyers can also opt for special trailering cameras or adaptive cruise control, but these features aren’t standard even on the top-shelf Denali trim. We could understand that for the trailer camera, but adaptive cruise control? Its omission from the standard features list of every trim leaves us disappointed. The Tahoe is available with adaptive cruise as well, and it too is only optional on even the highest trims.

The NHTSA awarded the Yukon four out of five stars overall, while the IIHS has yet to test it. It’s the same story for the Tahoe. 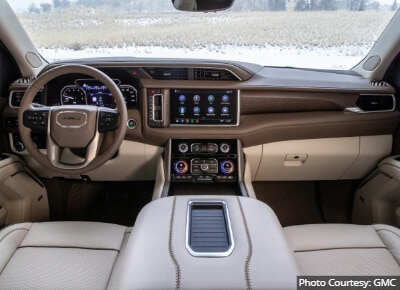 Ah, the trickiest question here: which of these SUVs is the better value? At first, you might be tempted to say the Tahoe. But is that really the case? Prices for the Chevy range between $51,000 and $71,000; the GMC runs between $53,000 and $71,000. Clearly, the Tahoe is cheaper on the low end, but that advantage erodes as you move up the price ladder.

Let’s not also forget the fact that the GMC comes standard with more driver-assist features, which alone likely cover that $2,000 difference in the base price. Add to that the fact that the Yukon uses more premium materials and features a more elegant design, and suddenly the verdict swings towards the pricier of the two. As always, finding the best value requires a holistic approach beyond price comparisons.

You may qualify for deals and incentives, check out this month's GMC deals and average prices paid.

Which Is Better, the Chevrolet Tahoe or GMC Yukon?

In our eyes, the Yukon. For a few dollars more, it comes standard with more safety features and has a nicer interior. We also prefer its front-end styling, though that’s admittedly an entirely objective opinion. Since all else is equal, we’d spring for the Yukon.

What SUVs are comparable to the Chevy Tahoe and GMC Yukon?

Check out the Ford Expedition, Toyota Land Cruiser, Toyota Sequoia, and Nissan Armada. For a more luxury-oriented comparison, the Cadillac Escalade and Lincoln Navigator could be worth a look.

Is the Yukon bigger than a Tahoe?

Barely. The difference in length between the two is a measly 0.7 inches. The Yukon also weighs more, which we wager is on account of the additional sound deadening and any hardware necessary for its additional standard features.

Is GMC fancier than Chevrolet?

Yes, kinda, sorta. GMC certainly pushes further upmarket with its Denali sub-brand, but on the lower end of the pricing scale, the two brands are very similar. Lately, GMC has been using nicer interiors than its Chevy counterpart, but the brand is by no means at Cadillac levels of luxury.

Is the Escalade similar to the Tahoe and Yukon?

Yes. The Escalade is built on GM’s body-on-frame full-size SUV chassis and shares most of its hardware with the two SUVs profiled here. Of course, the Cadillac is far more luxurious and offers many exclusive features not found on the Yukon or Tahoe.