Top 5 Causes and Fixes for Rattling Noise When Accelerating 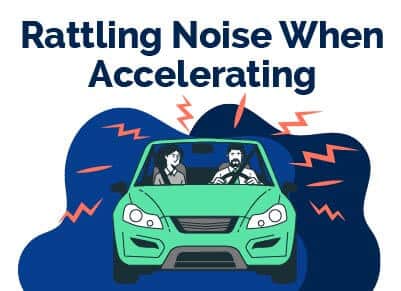 Your car is a complex piece of machinery and can make various rattling noises when running. These include the sucks and compressions of the engine's air-fuel mixture and the suspension and transmission ignition.

If these noises are not a sign of a severe problem, then they may be just a simple fix. However, it can be hard to diagnose a severe issue unless you bring the car in for a mechanic.

If you notice that your car's inner noise is getting louder as you accelerate, it may or may not be caused by something minor.

Older cars with many miles on the car odometer might have issues that could cause these noises. The rattling noise when accelerating might be caused by the following:

A rattling noise when you accelerate could be caused by a lack of oil. Not enough lubrication will allow friction to build up between the internal components of the car.

This could cause the car's inner noise when it accelerates. Having the proper oil level can help prevent this issue.

Aside from rattling noises when accelerating, low engine oil can cause other problems, such as overheating and loss of performance.

So, if it's been a while since you had an oil change, you must regularly check your car's oil.

To check the oil level, locate the dipstick of your car. After you've removed the dipstick, you can inspect its indicators by holding it down and wiping it with a cloth.

You should also check the oil's color; if it's thick or black, you might have to change it.

This means that the oil used in your car is old and won't be able to lubricate the engine efficiently. Most cars require an oil change every 3,000 to 7,000 miles.

However, some vehicles with synthetic oil can go as far as 15,000 miles before an oil change is needed.

A car's engine has a timing belt or chain to guide its various components' movement. This component is also responsible for keeping the car's engine running smoothly.

A chain or belt has a built-in mechanism that ensures that it's centered and has steady tension.

If the chain or belt gets loose, it could cause the engine to lose its timing, which could cause various components to hit each other.

This could also cause a loud clicking sound. If this happens, you might have to replace the chain and the timing belt.

However, if you can access the device, you can start pressing the strap between the pulleys. If you don't feel much tension, it's time to replace the chain or the timing belt.

The engine mounts are the part of the car that secures the engine to the chassis. These mounts are usually made of rubber and metal and typically last around five to ten years.

However, they can eventually wear out, which could cause the engine to move around in the car's engine bay. This could make the noises coming from the engine become louder.

The car's engine mounts are designed to reduce the vibration from the engine. If they're not working correctly, then it could cause the vehicle to vibrate excessively.

To determine if you have a bad engine mount, you'll need to get someone in the car while you inspect the engine.

Then, after putting the car in Park to Drive, reverse, and back to park, you'll need to see if the machine moves excessively.

Another major cause of rattling noise when accelerating is a piston slap. When the engine runs, the piston and cylinder go up and down as the vehicle moves.

This could cause the car's cylinder wall to become damaged. This could also cause the engine to make a loud clicking sound.

When the engine is still cold, the components of the vehicle contract and don't expand, which can cause the engine to make a loud clicking sound, this noise usually goes away once the engine reaches its operating temperature.

Some cars, such as the Nissan GT-R and the Chevrolet Corvette, experience this type of noise.

If the piston slap doesn't go away once the engine reaches its operating temperature, it could be a cause for concern.

This condition could be triggered by the wear on the piston rings, which could allow oil to get burnt and enter the cylinders.

A car's exhaust system can get very hot, and temperatures can reach up to 600 degrees Fahrenheit.

Due to this, your car's heat shields are designed to protect various components from excessive heat.

In addition, heat shields made from carbon composite materials can endure high temperatures.

Unfortunately, car heat shields are also prone to damage due to moisture and debris.

This could cause them to break free and drive the vehicle's heat shield to rub against other components. This could lead to a loud clicking sound.

These are estimates that will give you an idea of the cost of the repairs that your car might require:

Getting an oil change is usually the first step in addressing the issue of the vehicle's engine making a loud clicking sound.

Usually, a $50 or $130 oil change is enough for most cars. However, you might have to pay more if your vehicle uses synthetic oil.

Before you start an oil change, make sure that you inspect your car's underside for signs of a leak from the oil pan.

For example, if you see a puddle of oil, this could be a sign that the oil pan is leaking.

A new oil pan gasket can cost around $320, and replacing the entire pan could cost up to $500.

The cost of replacing the timing belt chain or the chain tensioner is usually around $350. It's a relatively simple task, generally taking an hour to perform.

However, if your car has complex designs, you might have to wait longer for the mechanic to install the new part.

Although it's possible to save money by replacing the timing belt chain, doing this is not recommended unless you have the necessary knowledge.

Engine mounts are relatively inexpensive and typically cost around $50 to $150 each.

However, depending on the complexity of the task, the cost of doing this can range from $200 to $400.

If your car has four engine mounts, you will likely need to replace the front and rear mounts in pairs.

You'll need to spend around $200 for the mounts and also pay for labor. If you need to replace four mounts, then you'll be paying about $850.

The cost of repairs related to your car's exhaust system will vary depending on the severity of the issue and the model of the vehicle.

If you need to replace the exhaust pipe or a part of the exhaust system, you'll have to spend around $250 to $400.

New exhaust pipes can cost around $500 to $750, while repairs on the catalytic converter can cost up to a couple of thousand dollars.

If you're having a problem with your catalytic converter, you might need to replace it. It can cost you as low as $900 to as high as $2,400.

If the heat shield needs to be re-installed, it can cost you around $100, or you'll need to spend about $250 to $400 for a new one depending on your vehicle's make.