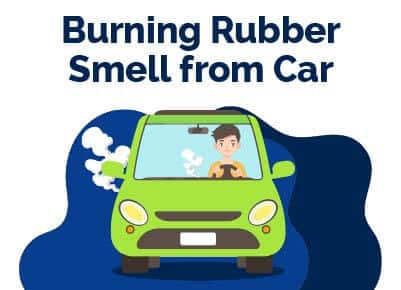 If your vehicle's components emit foul odors, something may be wrong with the car. For instance, if the burning smell lingers for a long time, it could mean that something is not working correctly.

Aside from the engine and hot pipes, your car has various rubber and plastic components that can cause a burning smell.

If these components come into contact with your exhaust system or your tires, they can release the foul odor you associate with burning rubber.

This article covers everything you need to know about the burning rubber smell from cars, including the common causes and what to do about it.

Although your tires can cause a burning smell, other car components, such as faulty drive belts, melted hoses, and burnt-out clutch components, are likely culprits.

Even the electrical system's shorts can create a burning smell. Unfortunately, since most of the wiring in your car's electrical system is made of plastic, it's not always easy to identify the cause of the issue.

One of the most common reasons your car's burning smell lingers is a leak in the oil or a faulty cooling system.

Other possible causes include a slipping clutch, a stuck brake pedal, or a component stuck in the engine bay.

These are the leading causes:

The various seals and gaskets in your car's engine are designed to prevent the oil from leaking out and reaching the hot parts of the vehicle.

Unfortunately, if these components go bad, the oil can reach the hot parts, such as the exhaust pipe.

Although burning engine oil doesn't smell like rubber, it can still create a similar odor to an untrained nose.

So, if you find an oil leak in your car's exhaust system, it's essential to fix it immediately.

Like the oil in your car's engine, the liquid in your vehicle's cooling system is also designed to prevent it from leaking. However, the oil can still leak if the seals and gaskets fail.

A leak in the cooling system can also interfere with the burning smell.

The sweet smell of a leaking liquid can be created by the hot engine components, such as the exhaust pipe or the engine block.

If you smell a similar sweet smell under your car, it's time to start looking for other potential issues with your cooling system.

Another common cause of the burning smell is a faulty power steering pulley or air conditioning compressor. If this component gets stuck, it can create excessive heat and a burning smell.

Another common cause of the burning smell is a failure of the automatic transmission or the lack of tension on the belt.

This issue could cause the belt to slip and create a burning rubber smell.

If you cannot tension the belt correctly, it could be caused by a faulty pulley. Before you start working on your car's engine, make sure that the serpentine belt is tight.

The clutch is an integral part of most manual cars, and it's typically used to drive and shift gears.

However, if you frequently ride your clutch too hard, it can cause it to become depressed halfway.

The clutch's purpose is to match the speed of the car's engine and transmission by pressing against the flywheel.

This process allows the vehicle to move smoothly from a stop to a rolling motion.

However, riding the clutch can cause the driver to keep pushing the flywheel and not fully engaging it.

The excessive heat generated by the clutch can also create a burning smell inside the car.

In addition, since it's made of paper mesh, the friction caused by the clutch can create a similar odor to that of burning rubber.

If you smell a burning smell in your car, it could be caused by something unrelated to the vehicle. For instance, if a bag gets stuck in the engine bay, it could cause an odor.

If the car's engine smells burnt, then the burning smell could be caused by something that's not related to the vehicle.

In such cases, inspecting the engine compartment for non-related objects is usually best.

Before you start working on your car, make sure that you inspect the fuse boxes for signs of an electrical short.

Since most of the electrical wires are fused, a short will not occur for a long time.

Another common cause of bad smells is the issue of sticking brakes. Since the pads on the brake are made of rubber, they can overheat and create a burning smell.

Unfortunately, most people do not realize that these pads also contain this material.

If your car's brakes are sticking, it's most likely due to a stuck brake pad or a faulty brake caliper.

Before you start working on your vehicle, make sure that you inspect the brake pads and the surrounding components.

Can You Drive a Car with a Burning Rubber Smell?

However, if you feel it's safe to take your car to the garage or repair shop but still have to keep driving, do so carefully.

Is It Bad To Breathe in Burning Plastic?

Like toxins are produced when burning rubber, burning plastic can create poisonous compounds.

Although small amounts of toxic chemicals can be safely inhaled, it's still important to avoid breathing in burning plastic fumes.

What Do You Do If Your Car Smells of Burning Rubber?

If you suspect your car's burning smell is caused by something more than a simple issue, contact an expert technician for a quick diagnosis and a complete evaluation.

They'll talk through the possible solutions and get you back on the road as quickly as possible.

Different types of rubber can contain toxins, such as cyanide and carbon monoxide.

When you breathe in this toxic smoke, your lungs and airways can become inflamed and swollen.

Other Car Smells You Should Act On

Some car smells are worth sniffing out, such as the musty air from your car's A/C vents or the rotten egg smell in the interior. Follow these steps to identify and fix your vehicle's foul hints.

If you smell gas in your car for a long time after filling it up, paying attention to it is essential.

For example, you might have accidentally spilled some gas on your clothes or shoes, and the fumes stayed inside the car. Roll the windows down to eliminate the smell, and start driving away.

If the smell lingers for more than a couple of hours, it could signal that something is wrong with your car's fuel system.

However, a prolonged gas smell could also be caused by a faulty fuel tank or injector.

To get the best possible fix, make sure that you get in touch with a professional at Firestone Complete Auto Care.

One of the most common car smells you should never ignore is the exhaust fumes from your vehicle's interior.

If the smell lingers for a long time, it could indicate something is wrong with your car's interior.

Exposure to harmful exhaust fumes can be hazardous, especially if you have pets or people inside the car.

Contact a professional for immediate assistance if you smell exhausted while driving.

A faulty fuel system part could cause a rotten egg smell. For example, if your car's fuel pressure sensors, catalytic converters, and filters are damaged or worn, a sulfur gas leak could enter your vehicle's cabin.

Another common issue could be faulty transmission fluid. If it's still unclear what's wrong with your car's transmission, replacing the liquid could be the best solution.

4. Burning Smells from Your Car

If the smell lingers for a long time, it could indicate something is wrong with your car's interior. For example, a burning smell could be caused by a faulty part of the fuel system.

Other reasons for the scent include a worn-out brake pad, an overheating compressor, or a burned-out electrical fuse.

If your car smells like burning rubber, something may be wrong with the wiring system or your brake system. Having a trained technician inspect the area could be the best solution.

5. When the Car Is Smelling Musty

If your car's vents smell musty, it could indicate that the excess moisture in the air has accumulated in your vehicle's drain lines or air filter.

You should avoid inhaling moldy air for a long time to prevent your health from being affected.

If your car's A/C vents smell like dirty socks or vinegar, it could indicate something is wrong with the AC.