With so many brands, models, and years from which to choose, picking a used or pre-owned SUV to buy can be daunting.

Aside from our testing of these models in years past, we relied on two sources to help us determine good used vehicles. First, we looked at the reliability scores from Consumer Reports. Second, we dug into the Insurance Institute For Highway Safety’s testing data for the models and years we chose.

Our primary focus is on models that are about three to five years old. However, we didn’t box ourselves in with regard to model years. The reason is that some models have generational changes that make them more or less reliable and more or less safe. 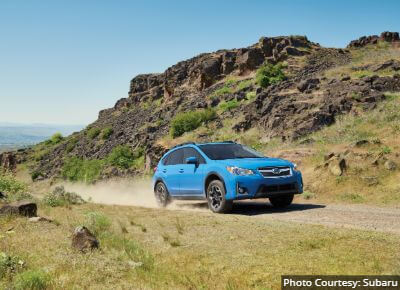 Subaru’s Crosstrek is a go-anywhere all-weather small crossover SUV in any of its trims. With standard all-wheel-drive from the company that makes that technology the core of its business, the Crosstrek is comfortable on any road in any climate. It is also very capable off-road.

Like nearly every Subaru of nearly every model year, the 2017 Subaru Crosstrek earned the Top Safety Pick award from IIHS, and the 2018 model earns the higher TSP+ rating. The 2017 Crosstrek earns a 4/5 rating from Consumer Reports, and the 2018 5/5. The 2018 is a newer generation. Despite being the first year of a new generation, the 2018 has better reliability than some older model years, according to our trusted source. If we were shopping, we’d try to find a 2018. However, the 2017 may be more affordable and in greater supply.

The Crosstrek uses a 2.0-liter engine to get the job done. It’s not a rocket off the line, but the Crosstrek, like many crossover SUVs, has a different vibe we prefer over small sedans, and speed is not a top consideration. The ride height is nearly ideal, and all Subarus have good outward visibility. One tip for all first-time Subaru buyers; AWD does not help you turn or stop in winter weather. Consider snow tires to make the most of your new Subie. 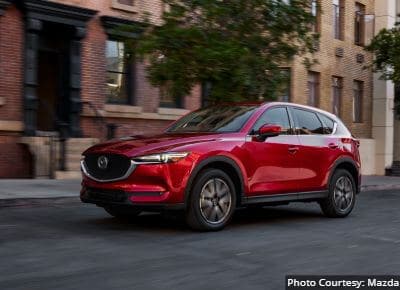 The Mazda CX-5 is the vehicle on this list that may be the easiest to find used. Mazda sells the CX-5 in relatively high volumes, and the span of years with a thumbs up is quite broad. The CX-5 earns a 5/5 for reliability every year, but the 2016 model year still earned a good 4/5. The CX-5 earns the highest IIHS score of Top Safety Pick+ in every model year from 2014 through 2018.

Read a few reviews of the Mazda CX-5, and you will discover that it is considered the sporty and fun crossover SUV in the small size segment. The CX-5 had a generation change starting in 2017. The styling gets a bit snazzier, and some CX-5s can be upgraded by the dealer to include Apple CarPlay and Android Auto for a fee. 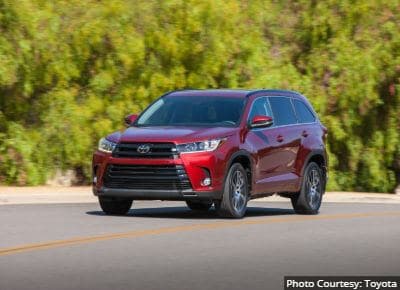 Highlanders are built in both front and all-wheel drive configurations. Powertrains include four-cylinder, six-cylinder, and hybrid options. The Highlander is not the largest three-row SUV in the market, but it may well be the best. 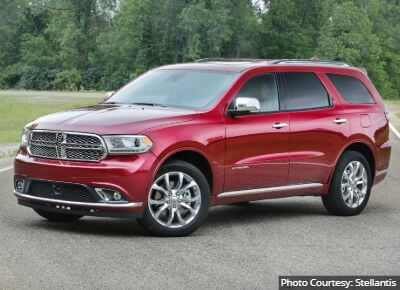 Choosing a good used large SUV is a bit trickier than smaller sizes. IIHS and Consumer Reports data is limited on some models, and others have poor safety or reliability records. One large SUV that does have available data we feel comfortable recommending is the 2017 Dodge Durango.

The Durango is a true body-on-frame SUV with a choice of two powerful engines, including a V8 with 360 hp. Durango shoppers know that this SUV can tow up to 7,400 pounds when properly equipped and has a very large 85 cubic foot cargo volume with the rear seats folded. The Durango comes with seating for five or seven depending upon trim.

What is the best used SUV to buy?

Based on our testing, reliability data provided by Consumer Reports, and safety data from IIHS, the Toyota Highlander is the best used SUV overall. It has a legacy of top scores from 2017 going back more than a decade.

What are the most reliable SUVs?

Our research revealed that the 2017 Subaru Crosstrek, 2014-2018 Mazda CX-5, Toyota Highlander, and 2017 Dodge Durango have the best reliability scores in their individual crossover SUV segments.

In our research, we were surprised to find that owners of many popular SUVs report poor reliability. For example, the Ford Explorer and Expedition, as well as the Chevy Suburban, all have Consumer Reports scores of ⅕ in 2016. We suggest that used SUV shoppers look carefully at the reliability history of any SUV they consider purchasing.

To our surprise, the top-selling crossover SUV in America, the Toyota RAV4, scored poorly on an important IIHS crash test called the small frontal overlap crash test in its prior generation. The Ford Escape also had this same issue, which is why neither appears on our list of the best used crossover SUVs. We recommend only the newest generation of each of these popular vehicles.