Planning a post-COVID road trip? Here are the states with the most -and least- drive-thrus and drive-ins 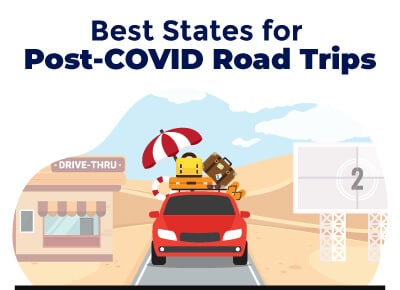 We appreciate that, following months of lockdown rules, you’ll be keen to get out on the open road on that first post-COVID car trip and you’ll want it to be as exciting and memorable as possible.

We wanted to help make planning your journey that much easier by identifying the states with the highest number of drive-thru restaurants and drive-in cinemas to enhance your experience.

This is also to make sure that you’re fed, watered, and entertained throughout your journey and it also has the added bonus of supporting hospitality and entertainment businesses that might have suffered financially because of the pandemic.

We also can’t ignore the fact that drive-thrus and drive-ins play an enormous cultural role in the grand tradition of the American road trip.

In order to find out more about the consistency of the drive-thrus you might expect to find en route, we sourced data from a survey of over 1,000 Americans to find out which restaurants they had visited at least once in the previous 30 days.

This went on to reveal the top 10 drive-thru brands which, in turn, allowed us to go through each of their websites to see how many branches were in each state.

To find the data we required around drive-in cinemas, we used Google Maps to locate how many there were in each state.

The total number of drive-thru restaurants across the United States is 37,621, meaning that the majority of places you choose to visit should certainly have something to suit your tastes 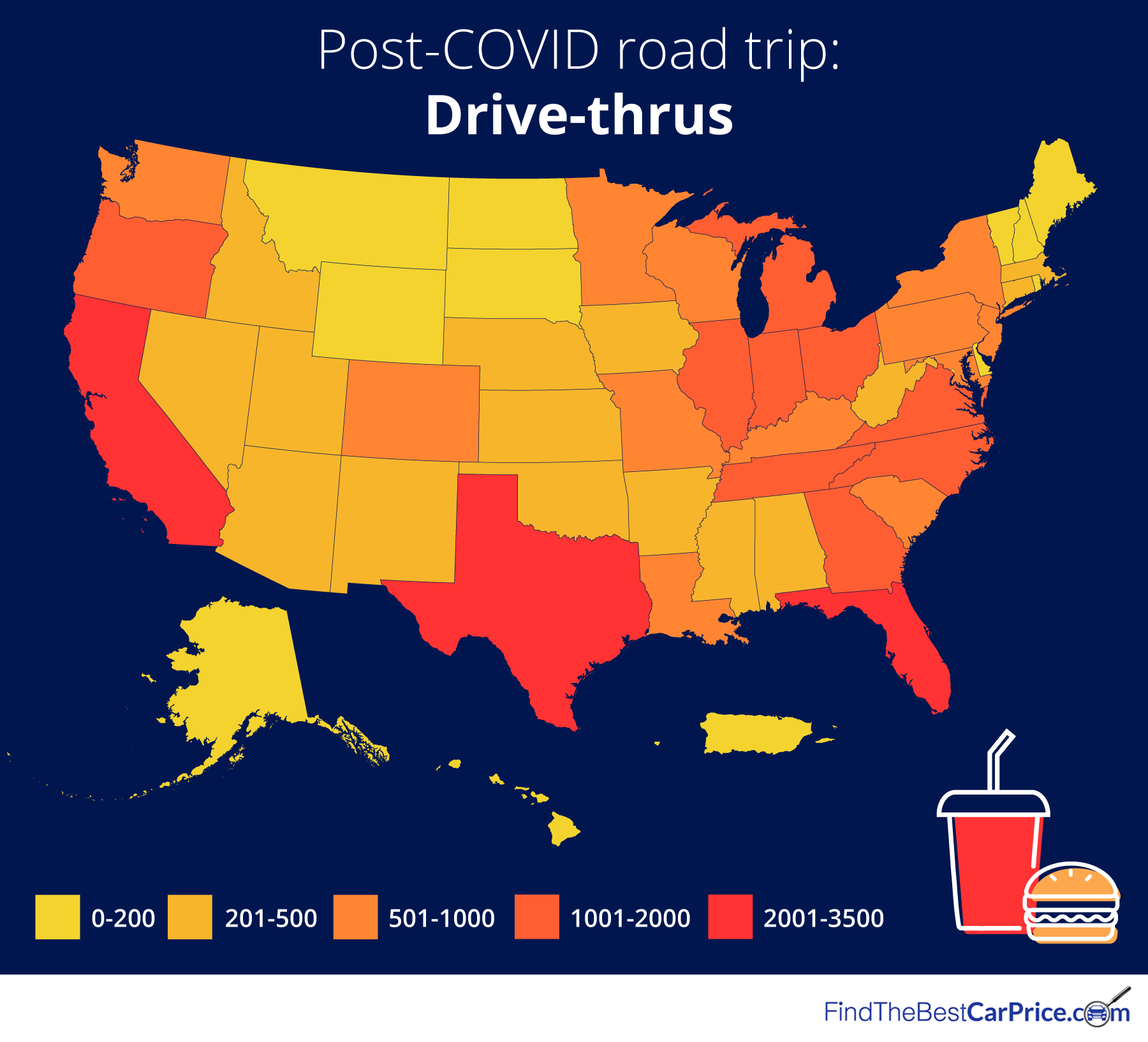 So, without further ado, the top 10 states with the highest number of drive-thrus, including national favorites Chick-Fil-A, Burger King, Dairy Queen, and more, are:

Known as the Lone Star State, Texas is famous for its barbecue culture, live music, and hot temperatures, which makes it the ideal place for a road trip.

It boasts the highest concentration of drive-thrus of any state. This includes 646 Taco Bells, which is understandable given it borders Mexico and is the home of Tex-Mex cuisine.

It also has 566 Jack In The Box branches and 594 Dairy Queens, perfect for those wanting to get their fix of burger and fries while en route.

Sunny California is one of the nation’s favorite places to visit, which isn't surprising given that it’s home to beaches galore and famous tourist destinations and national parks including Hollywood, Disneyland, Yosemite, Alcatraz, Angel Island and the Golden Gate Bridge.

It also features the classic Route 1, which guides drivers through the towns of Monterey, Santa Cruz, and San Luis Obispo and is one of the original great road trips, alongside the iconic Route 66.

Florida is famous for its beaches, theme parks, and orange orchards. This East Coast home of Mickey Mouse is also known for its natural beauty, such as the Florida Everglades. It ain’t called the Sunshine State for nothing with its abundant great weather.

This state is also home to 526 Wendys, 448 Taco Bells, 195 McDonalds, and 155 Arbys, which provides the perfect handheld food for long trips.

Ohio is known for its rich tradition of American Football, as well as being home to the Rock and Roll Hall of Fame and plenty of museums, zoos, amusement parks, and botanical gardens.

The Evergreen State has the nation’s first mall, some of the longest floating bridges in the world, stunning glaciers, the world's largest building, the nation's oldest operating gas station, and the world's first soft-serve ice cream machine.

Georgia, referred to as the Peach State, is most known for its mountain landscapes and natural features, from the likes of Lookout Mountain and the Okefenokee Swamp, to the romantic antebellum squares of Savannah and the dazzling modern architecture of Atlanta.

It has 290 Wendys, 235 Taco Bells, 128 Popeyes, perfect for fried chicken lovers, and 72 Checkers and Rallys for those moments when only BBQ will do.

Michigan is known for being the historic heart of the American automotive industry and it’s also where the Motown sound originated in the 1960s. Today, it boasts over 100 parks and is the only state which touches four of the five Great Lakes, meaning it has the longest freshwater coastline of any US state.

Illinois boasts big cities, attractive towns, and farmland and is probably best known for Chicago, a world-class city regarded as the cultural heart of the US.

In the state of the Windy City, you’ll find 260 Dairy Queens, 196 Wendys, 119 Popeyes, and a relatively low 51 McDonalds, and 10 Starbucks for those in need of their morning coffee on the go.

North Carolina has some of the highest mountains in the Eastern US, 300 miles of pristine coastline, quaint towns, vibrant cities, and over 500 golf courses so there’s something for everyone here.

Indiana is home to a national park, botanical gardens, museums, and markets brimming with the finest fresh produce.

Meanwhile, here are 10 states with the lowest number of drive-thrus, but don't let that put you off as they’re all well worth a visit:

Don’t let the absence of drive-thrus deter you because this state is blessed with a rich history and culture, exceptional food, pristine beaches, majestic mountains, relaxation, and adventure. 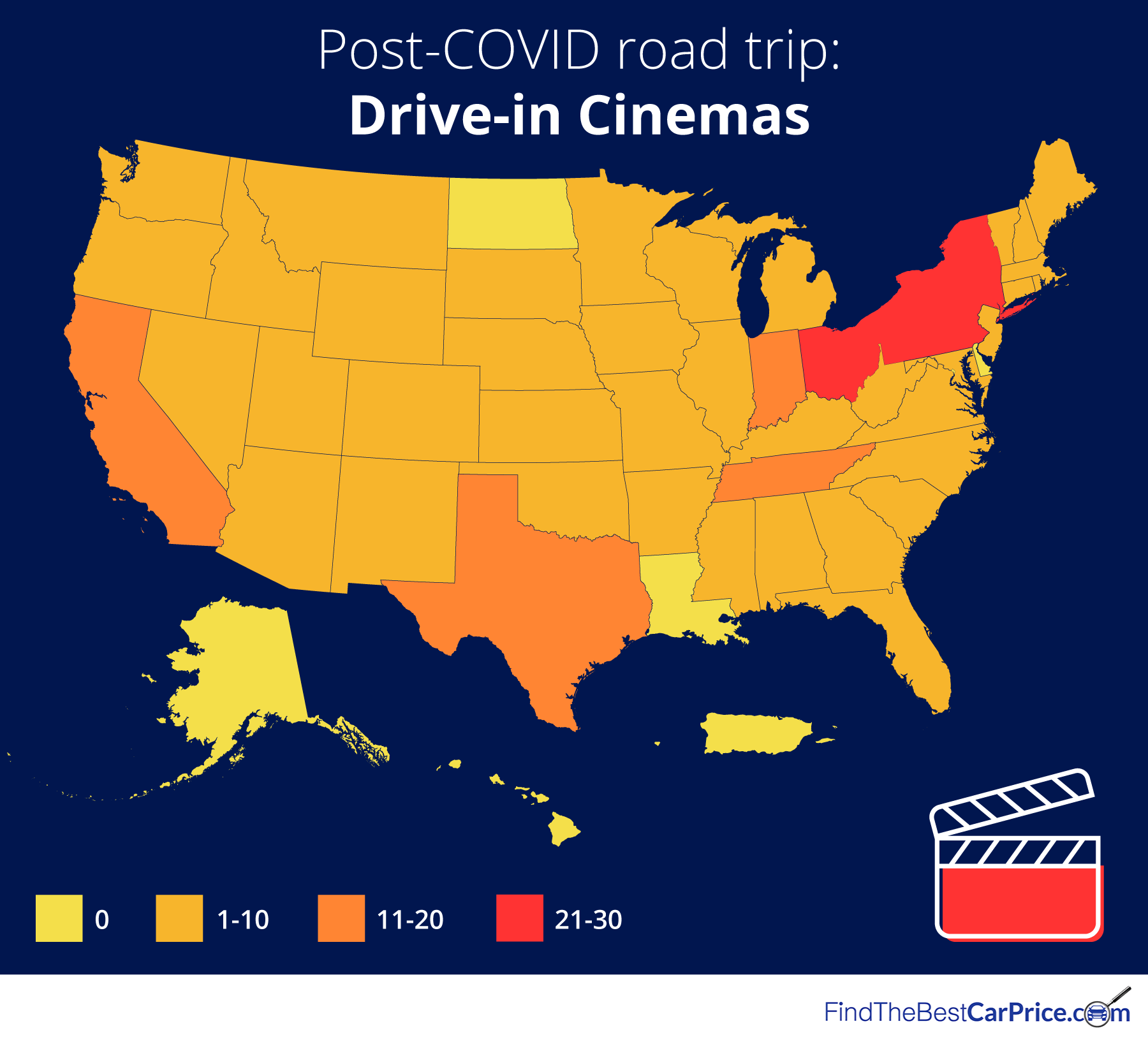 The 10 states with the most drive-in cinemas are:

The total number of drive-in cinemas across the US is 323, proving that this well-loved industry, which is a part of the fabric of American popular culture, is still popular.

The states with the fewest drive-in cinemas were:

To plan your dream road trip, you’ll need the right car and this is where we can help. Allow us to find you the most competitive deal on your next car.