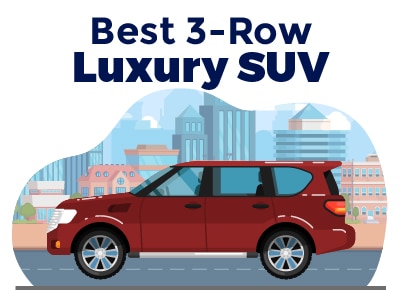 The luxury 3-row SUV segment is bigger and better than ever, with competitors from every corner of the globe.

In addition to having loads of space, the shift of buyers from sedans to SUVs has led these big haulers to offer some of the most advanced technology inside and out.

That leads to some big price tags, but these 3-row SUVs offer a combination of passenger space, cargo space, and premium luxury like no other vehicles on the market today. 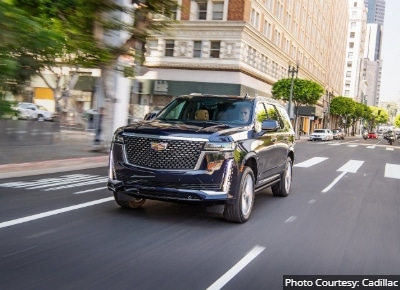 The Escalade has long been popular due to its rugged, truck-based construction, making it a great vehicle for towing, driving on rough roads, or battling winter weather. That sturdy platform comes with the tried and true 6.2-liter V8, delivering 420 horsepower, 460 lb-ft of torque, and the ability to tow up to 8,000 pounds.

All of that power also makes the Escalade one of the quickest and fastest 3-row SUVs on the market, complete with optional Brembo brakes and a high-tech magnetic suspension system that combine to afford this big family hauler excellent driving dynamics.

On the inside, the Escalade has the most front and second-row headroom, while also being on the upper end of the scale for legroom. Of course, the cabin comes with premium finishes, plush leather, and an advanced infotainment system that includes second-row screens.

Best of all, pricing for the Cadillac Escalade is on the lower end of the spectrum for the Luxury trim level with four-wheel-drive and the V8 engine, starting at just $80,980, but as you begin adding options, the price rises quickly.

The Takeaway: The Cadillac Escalade has long been the benchmark vehicle for the large luxury SUV segment, offering the greatest range of capabilities, the most interior space and loads of power.

You may qualify for deals and incentives, check out this month's Cadillac deals. 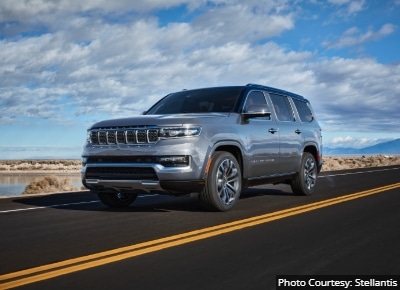 With the debut of the 2022 Grand Wagoneer, the Jeep brand is once again setting the bar for the luxury 3-row segment, beating the benchmark Escalade in every way, allowing the big Jeep to storm to the head of the class.

The new Jeep Grand Wagoneer is powered by a 6.4-liter Hemi V8, delivering 471 horsepower and 455 lb-ft of torque. That engine, the most powerful in the sub-$100,000 range, sends the power to all four wheels by means of an 8-speed automatic transmission and a standard four-wheel-drive system, making it surprisingly quick. Also, with a towing capacity of 9,850 pounds, it is the most capable luxury SUV in the segment by a big margin.

The cabin of the new Jeep Grand Wagoneer isn't the largest on our list, but it is on the upper end of the scale in terms of passenger space and cargo space. On the other end, this new Jeep is the luxury leader, with the most extensive spread of premium features of any vehicle on our list. The Grand Wagoneer is the first to offer the passenger’s side screen.

The new Jeep Grand Wagoneer comes with more premium amenities inside and out, putting its base price in the upper end of our comparison, but it starts $20,000 less than the BMW – which is the only vehicle on our list with more power.

The Takeaway: This Jeep isnt the biggest or most powerful, but it offers the most luxury and the greatest capabilities with a competitive price when it it fully loaded.

You may qualify for deals and incentives, check out this month's Jeep deals. 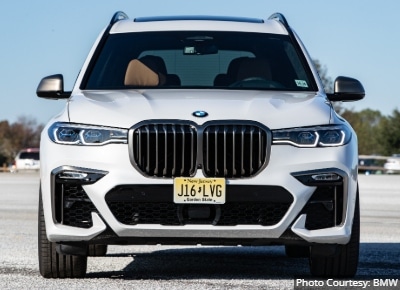 While 3-row SUVs are seldom chosen for their driving dynamics, the BMW X7 M50i offers the most power on our list with legendary interior features, but it does so with the biggest starting price on our list by a sizable margin.

The main advantage of the BMW X7 M50i over the other 3-row SUVs on our list is driving dynamics, and that begins under the hood. The X7 M50i is powered by a twin-turbocharged V8 that delivers 523 horsepower and 553 lb-ft of torque, making it more powerful than the competitors by a considerable margin. Like all BMW M vehicles, this X7 has a performance suspension and braking system that affords it the best handling capabilities on the list, but it can still do some work – towing up to 7,500 pounds.

On the inside, the BMW X7 M50i comes with all of the premium finishes and materials that you would expect from the legendary brand, offering the roomiest front seats on our list. It also ranks on the upper end of the list in terms of cargo space, making it great for road trips or golf outings where you are hauling lots of people and their belongings.

The key downside to the BMW X7 M50i is the price, starting at $100,795, making it the most expensive option on our list.

The Takeaway: If you want a 3-row luxury SUV that packs loads of power and the premium European feel, and you aren’t shy about spending big money, the BMW X7 M50i is a great option. 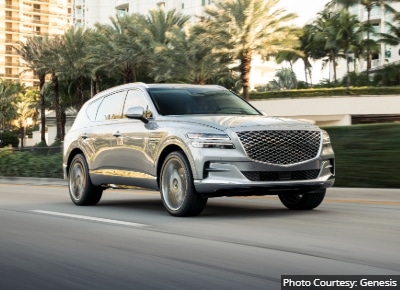 Like the other Genesis brand vehicles, the GV80 offers premium luxury without a premium price, serving as the least expensive vehicle on our list by a huge margin.

The Genesis GV80 3.5T AWD Advanced+ is powered by a twin-turbocharged V6 that offers 375 horsepower and 391 lb-ft of torque, allowing it to tow 6,000 pounds. Those are the lowest performance and capabilities numbers on our list, but this Korean SUV still packs more power than many average SUVs.

The Genesis GV80 3.5T AWD Advanced+ doesn’t lead our comparison in any interior measurements, but it is in the upper end of the spectrum in passenger and cargo space. Also, the cabin of this Korean SUV is packed with premium finishes, materials, and technology, creating the luxury feel that you would expect from a high-end 3-row.

The Takeaway: The Genesis GV80 3.5T AWD Advanced+ is the ultimate 3-row luxury SUV for anyone shopping on a budget. 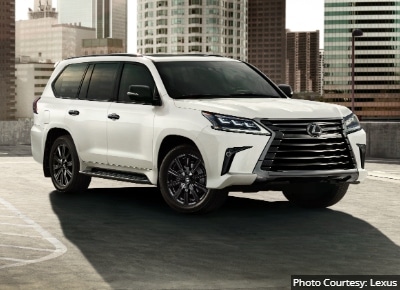 The Lexus LX 570 is powered by a 5.7-liter V8 that delivers 383 horsepower and 403 lb-ft of torque, so it is on the lower end of the power scale for luxury SUVs, but those numbers make the big ute plenty spunky. Those power numbers also allow this vehicle to tow 7,000 pounds, so it will comfortably pull the most common consumer-grade trailers. The LX 570 also has adjustable suspension and drive modes, allowing it to be surprisingly capable off-road.

On the inside, the Lexus LX570 has the smallest passenger compartment, with the least amount of head and legroom at all of the key seating positions. It also has the smallest cargo area, but what it lacks in space it makes up in premium features and build quality.

The Lexus LX570 has a base price starting at $93,275, making it the second-most expensive on our list, trailing only the BMW.

The Takeaway: The Lexus LX570 doesn’t offer the flash and flare of the other luxury 3-row models, instead, relying on its reputation for durability to attract buyers.

What is an affordable luxury 3-row SUV?

The Genesis GV80 3.5T AWD Advanced+ is the ultimate 3-row luxury SUV for anyone shopping on a budget. It doesn’t offer the big power of the American and European SUVs, but it offers comparable interior luxury to the best in the world and loads of interior space at half of the price of the competitors when heavily optioned.

What is the best-selling large luxury SUV in the United States?

Based on sales numbers from the first three quarters of 2021, the Cadillac Escalade is the best-selling large luxury SUV in the United States with more than 30,000 units sold through September. The BMW X7 line sits second with just over 16,000 units sold during that same period of time, while the Lincoln Navigator is third with around 12,000 units sold.

Are there any electric 3-row luxury SUVs?

While the Tesla Model X comes standard with seating for five across two rows, you can add a third row to the rear-most portion of the all-electric SUV. However, the interior of the Model X is considerably smaller than the 3-row SUVs discussed above, so it is a much tighter fit for those in the second and third row of the Tesla.

Does the new Jeep Grand Wagoneer have 3-rows?

With the debut of the 2022 Grand Wagoneer, the Jeep brand is once again setting the bar for the luxury 3-row segment, beating the benchmark Escalade in every way, allowing the big Jeep to storm to the head of the class. 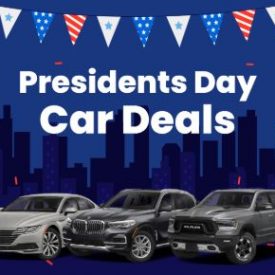