SUVs are all the rage these days. Vehicles the size of the Toyota RAV4 now make up the single largest segment in the auto industry by sales volume.

This story will highlight the best four-cylinder-equipped SUVs on the market today. We’re going to warn you upfront that every vehicle on the list “cheats". Each adds either electrification or turbocharging to fill in the gaps where a conventional four-cylinder would not be right for the job. One important note; Every four-cylinder engine on this list will work just fine on regular unleaded. No engine that requires premium fuel is worthy of any recognition, in our opinion.

Here is our list of the best four-cylinder SUVs in the American market today.

*Toyota does not offer a combined torque rating for hybrids and plug-in hybrids. 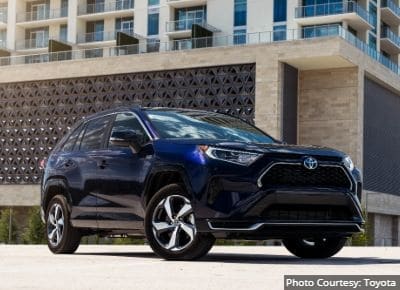 No brand has more experience with hybrid technology and green vehicles than Toyota. With over 30 years of development under its belt, Toyota rolled out the new 2021 RAV4 Prime last summer, and it quickly became one of America’s fastest-selling models. The reason is its four-cylinder plug-in hybrid powertrain in a compact SUV form.

Toyota starts with one of the most efficient gasoline engines ever offered in any automobile. This 2.5-liter engine incorporates an Atkinson cycle combustion process with many other technologies to offer a clean, powerful, and fuel-efficient engine. To this, Toyota adds multiple electric motors that are part of the transmission. With no gears to change and instant electric torque, the RAV4 Prime has run a 5.5-second 0-60 MPH sprint in independent testing. That makes it quicker than many V6-equipped premium vehicles its size. With an MPGe rating of 94, the RAV4 Prime is also as efficient as many battery-electric vehicles but has a 600-mile range. Best of all, this vehicle feels fast and can tow up to 2,000 pounds. 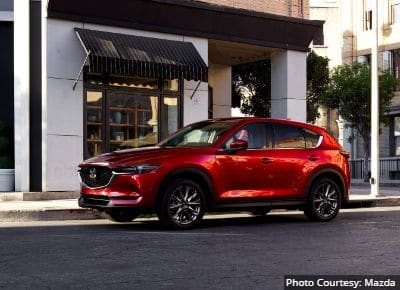 Mazda has a long history of turbocharged four-cylinder engines in its sports cars like the legendary MAZDASPEED3. A few years back, Mazda revealed a new 2.5-liter turbocharged engine that it would use across its lineup. Unlike turbos from the past, this one is tuned to provide diesel-like torque at low RPMs and provides Mazda’s crossovers with a very satisfying pull from a stop.

We’ve tested the Mazda 2.5-turbo in the CX-30 (three times), in the CX-5, and in the CX-9 (twice). Our feeling is that the Mazda 2.5T is the best turbocharged four-cylinder engine in production today for this mission. With over 300 ft-pounds of torque and the ability to operate happily on regular unleaded fuel, this engine is the ideal match for Mazda’s upscale crossover SUV lineup.

You may qualify for deals and incentives, check out this month's Mazda deals here. 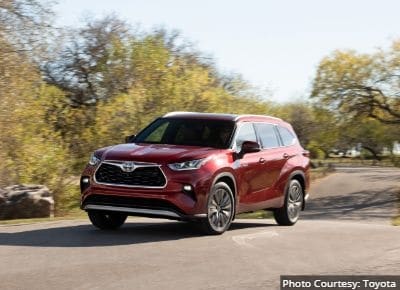 Scan a few of our Best Of lists related to midsize SUVs and family vehicles, and you will find that the Toyota Highlander - specifically the hybrid version - lands on many of our lists. With much of the same basic technology that the RAV4 Prime offers, the Toyota Highlander Hybrid is remarkable in that it can save an owner $14,000 in fuel costs over its lifespan compared to a V6-equipped SUV like Honda’s Pilot.

Best of all, the 243 hp produced by the Highlander Hybrid’s 2.5-liter hybrid engine is more than enough to get the job done that the Highlander is asked to do. It is smooth and quiet in normal driving, but it can also scoot when you need to be quick for a sprint into a difficult merge. The Highlander Hybrid offers 35 MPG when equipped with all-wheel drive. 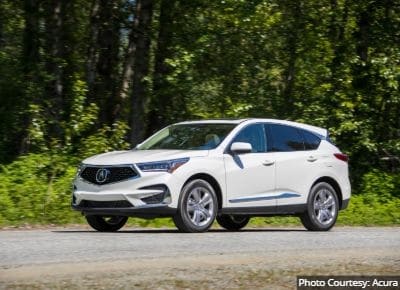 Acura’s RDX is a compact crossover SUV that likes to be pushed. Acura is Honda’s sporty premium brand, and the 2.0-liter turbocharged engine in the RDX is perfect for this mission. Did we like the V6 in past RDX model years? Sure we did. Until we drove the 2.0-liter turbo.

The RDX’s four-cylinder engine has 280 lb-ft of torque, and that torque is provided lower in the rev band than most V6 engines. The RDX has guts when you start off, and it can also rev when you want maximum velocity. Try the RDX with its new turbo. You won’t miss the old V6. 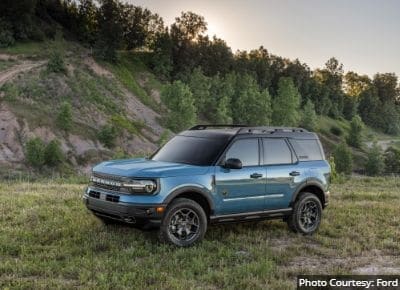 This small-size SUV from Ford comes with two turbocharged engines. The base and second-step trim have a 3-cylinder engine which is novel, but our favorite in this vehicle is the 2.0-liter four-cylinder turbo found in the top two trims. Making 250 hp and 277 lb-ft of torque, the 2.0-liter turbo provides the Bronco Sport with the power and pull that is deserving of a model with ‘Sport” in its name.

When off-roading or towing, this extra punch is why we have named the Bronco Sport to so many of our Best-Of lists. If you are shopping for a Bronco Sport, we suggest driving trims with both engines. It will take you no time at all to feel the difference. 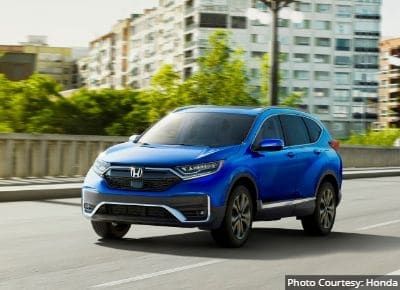 Honda’s 1.5-liter turbocharged engine in the CR-V is the base engine. In its class, this makes the CR-V unusual, and in our opinion, a standout. The 190 hp small turbo is gutsy enough for daily driving.

We also think it offers more than ample passing and on-ramp capability. The real reason the CR-V’s 1.5-liter turbo is on this list is that it is simply the best base engine in the midsize SUV segment.

How could we ignore that?

Should I buy a four-cylinder SUV?

What is the most reliable four-cylinder engine in an SUV?

Toyota’s four-cylinder hybrid and plug-in hybrid engines used in its RAV4 and Highlander SUV lines have earned a solid reputation for reliability and durability.

Which four-cylinder SUV has the most power?

Among the four-cylinder engines available in popular SUVs, it is hard to top the Toyota RAV4 Prime’s 302 hp. This power is combined with a whopping 94 MPGe rating.

Which four-cylinder SUV has the best fuel economy?

The Toyota RAV4 Prime earns a 94 MPG rating from the EPA.