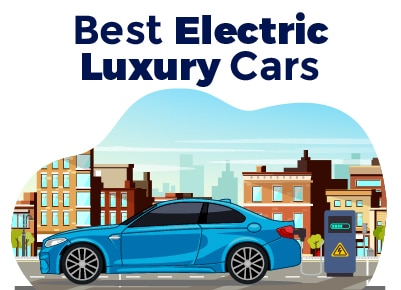 Since the advent of modern battery electric vehicles (EVs) a little over a decade ago, electric cars have carried a premium price tag.

Fast forward ten years and everything has changed. Tesla is an established automaker, legacy OEMs like Mercedes and BMW are joining the transition to electric luxury, and even rival EV startups like Lucid and Rivian are starting at the high-end of the market.

Premium electric cars are no longer a rarity. In fact, buyers have plenty of options to cross-shop in 2022.

For some buyers, premium EVs are all about the latest technology and having all-electric performance that blows away the competition.

For others, the classic luxury of a Mercedes or BMW, with a carefully crafted interior, exquisite materials, and a finely-tuned ride, is what’s required. 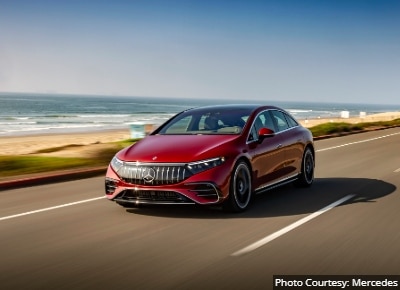 Any luxury list without a Mercedes feels somehow wrong, even if we are in the very early days of premium electric cars. Thank goodness then for the arrival of the Mercedes EQS. What it (subjectively) lacks in external appeal, the EQS more than makes up for on the spec sheet and around the cabin, which feels like no other Mercedes on the market.

Starting with the massive Hyperscreen, the cabin of the EQS exudes high-tech luxury. The 56” curved glass feature is actually three distinct displays, housing the driver cluster, a 17.7” infotainment center, and a passenger entertainment screen that puts most center displays in other cars to shame. The high resolution and smart MBUX operating system deliver a futuristic experience that anyone shopping for premium electric cars has come to expect.

Under the hood - or floor, as we’re talking about a ground-up EV here - Mercedes again offers premium specs. The shape of the Mercedes EQS is designed with greater range in mind, yielding an estimated 350 miles on a charge and a ride that matches its S Class cousin. More than 200 kW of DC fast charging power on a capable charger also means that it will be back on the road quickly during longer trips.

Testing also shows that the EQS has one of the quietest cabins out there, which along with its HEPA air filtration system, built-in fragrances, and massaging seats, makes every journey a refined, relaxing experience.

You may qualify for deals and incentives, check out this month's Mercedes-Benz deals. 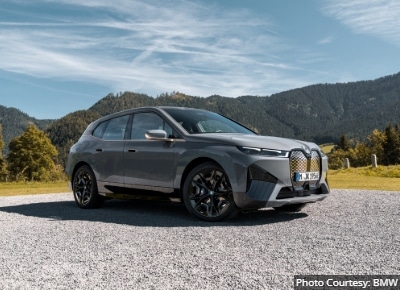 The BMW iX is a flagship vehicle for the German automaker, aimed at blending the established quality and refinement of the brand with the advanced technology expected of the best luxury electric cars. Despite coming in for a lot of criticism for its continued use of an oversized bucktooth grille that no EV really needs, the car’s cabin is a breath of fresh air. Like Mercedes, BMW is showing that true beauty lies on the inside of its luxury electric cars.

The interior of the iX exemplifies thoughtful cabin design. The curved display of the infotainment system is by no means as expansive as others on this list, but its floating position and application of BMW’s latest iDrive system are beautifully delivered. Crystalline controls for seat adjustment, volume control, and changing drive modes add an opulent touch, while sustainable materials and walnut accents complete the clean, contemporary feel of the interior.

Out on the road, an estimated range of 300 miles is respectable, if not leading the pack in the increasingly demanding world of luxury electric cars. However, fast charging capability is right up there with others on this list, meaning that you’ll be back on the road quickly after any short rest break. With impressive power of 516 HP - or up to 610 HP in the recently announced M variant - the sensible-looking iX also takes a step towards sports territory.

For any premium electric car buyer caught between the refinement of a Mercedes and the performance of a Porsche, the sportier variants of the BMW iX could provide a happy middle ground.

You may qualify for deals and incentives, check out this month's BMW deals. 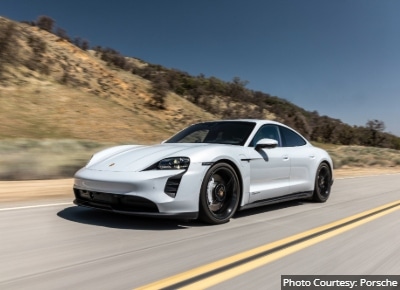 If performance is more in line with your idea of luxury, it’s hard to look beyond the Porsche Taycan as the best option for your premium electric car. What BMW and Mercedes deliver in terms of the cabin quality of their luxury electric cars, Porsche chooses to put down on the road (or track, if you’re feeling frisky).

That’s not to say that the Porsche Taycan is short on interior refinement, however. Opt for the new Cross Turismo variant and you’ll even get the semi-practical shape of a wagon, without sacrificing the exceptional performance.

On the road, a stated EPA range of 227 miles on a single charge is unusually low, because in real-world driving the Taycan’s air slicing shape and two-speed transmission yield much higher results. At any speed, Porsche’s electric sports car is comfortable delivering up to 590 HP with precise control and will go the distance on longer journeys, as its 800-volt charging system keeps fast charging stops to around 20 minutes.

If driving thrills are high on your list of priorities for a high-end EV, the Porsche Taycan is one of the best electric luxury cars out there. 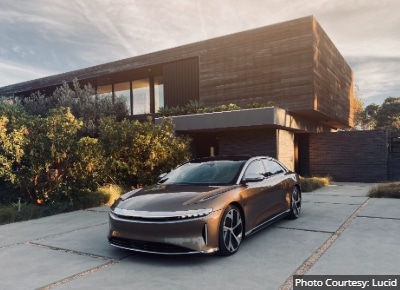 The Lucid Air delivers both outside and in, with external design that feels sleek without falling into the trap of sacrificing everything at the altar of range. Lucid win on the latter category anyway, as we’ll get to shortly. Step inside and you’re greeted by a sweeping glass roof that extends from the windscreen all the way to the rear of the car, interrupted only by the mandatory sun visors. A few thoughtful physical buttons accompany multiple touch screens, although the central infotainment screen is automatically stowed at the touch of a button, bringing further minimalism when you want it. It’s the kind of quality one might not expect from a new automaker and remains to be seen whether Lucid can deliver it at scale.

Nonetheless, with a spacious cabin, well-executed infotainment system, and the best range of any EV currently available, Lucid has the potential to beat both Tesla and legacy automakers at their own game. Lightweight electric motors that push the Air Dream Edition to 520 miles of EPA range eclipse anything that has come before, while plush materials and a sweeping panoramic glass roof make for a refined cabin in which to cruise away the miles.

While the Lucid Air is unlikely to rival its German counterparts for sheer attention to detail and exquisitely crafted interiors, it is a luxury electric car with Tesla-like performance and exceptional range. For any premium EV buyer willing to take a chance on a startup automaker, Lucid has delivered a high-quality offering at the first time of asking. 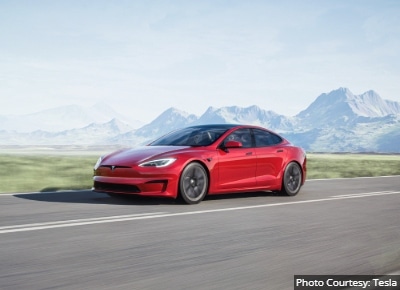 Tesla’s updated Model S is primarily about performance, yet it touches on enough premium deliverables that it also enters the territory of luxury electric cars.

Reaching 60 mph in under 2 seconds is an undeniable party trick, yet it’s the ongoing minimalism and high-tech Tesla interior that makes the Model S Plaid stand out in premium terms.

The controversial yoke steering wheel embodies Tesla’s desire to remove physical input from cars, with no turn signal stalks or gear selector on the wheel or center console. Everything is controlled via the 17” infotainment screen, voice control, or the few buttons on the yoke.

While other luxury competitors now offer greater range, the fact that Tesla’s latest brings all this power and performance while still delivering close to 400 miles on a charge, packing in all of Tesla’s technology, and seating five people comfortably, gives it a futuristic take on transport that crosses into luxury car territory for some buyers. Factor in the exclusive Supercharger network and you have an electric car experience that even the high-end automakers on this list still struggle to match.

In the world of EVs, luxury models continue to push the envelope in terms of both technology and cost. When money is no object, the models on this list represent the best electric luxury cars available in 2022. 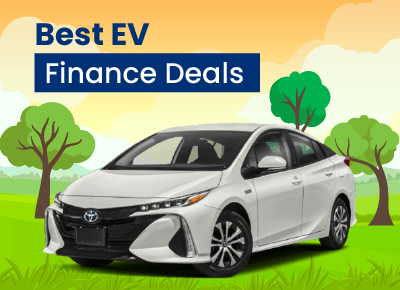 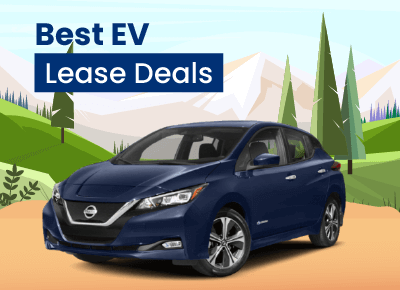 What luxury EV has the longest range?

The Lucid Air has the best range of any EV currently available. It has an EPA range of 520 miles in the Air Dream Edition.

What is a fun luxury EV?

If driving thrills are high on your list of priorities for a high-end EV, the Porsche Taycan is one of the best electric luxury cars out there.

Although electric cars are, in general, more expensive upfront than combustion-based vehicles, that sticker shock extends a little further with performance models.

Does BMW offer an electric vehicle?

The iX is the flagship EV from BMW. It’s aimed at blending the established quality and refinement of the brand with the advanced technology expected of the best luxury electric cars.

Does Mercedes-Benz offer an electric vehicle?

The EQS is an all-new electric vehicle from Mercedes. The shape of the Mercedes EQS is designed with greater range in mind, yielding an estimated 350 miles on a charge and a ride that matches its S Class cousin.