Best Dually Trucks: Which One Is the Ultimate Work Truck?

Dually trucks - those massive, heavy-duty pickups with two wheels per side in the rear - are the ultimate workhorses.

There are only four players in the heavy-duty, dual-rear-wheel pickup segment, and they all hail from Detroit.

To say each of these trucks are capable is an understatement. Let’s take a look, starting with the most refined of the bunch. 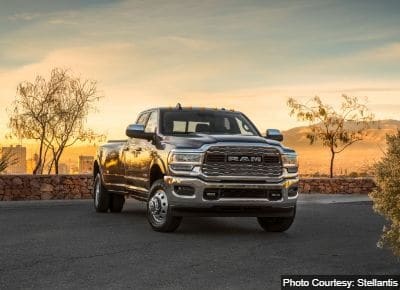 Make no mistake about it: this heavy-duty truck can tow just about anything. Even the gas 6.4-liter V-8, which makes a wimpy 429 lb-ft of torque, will still pull up to 18,210 pounds properly equipped. But the real power is put out by the 6.7-liter Cummins diesel. With six cylinders in a row and the help of a turbocharger, this engine churns out 370 horsepower and 850 lb-ft of torque.

The 3500 is also privy to an exclusive high-output version of the Cummins that makes 400 horsepower and a full 1,075 lb-ft of torque. So equipped, you can latch a best-in-class 37,100 pounds worth of gooseneck trailer to the 3500’s bed. You won’t find much tech aboard to help you handle that load, however. Trailering on the Ram is still largely done the old-fashioned way: driver knowhow. 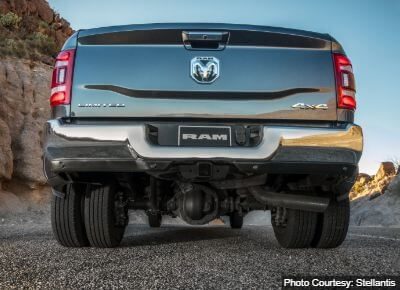 Though the 3500 continues to use heavy-duty leaf springs and a solid rear axle for towing and hauling purposes, this is still one of the smoothest-riding dually pickups you can purchase.

The cabin of the 3500 is posher than ever. Base models are light on technology but employ quality materials that look carefully assembled; high-end trims add copious quantities of leather, wood, and screens. You can even get a touchscreen measuring a Tesla-like 12 inches on top models, symbolic of where the heavy-duty truck segment is heading.

Quibbles are few. We’re mainly concerned that the six-speed automatic in the Cummins is down a few cogs compared to competitors and that tow-assist technology is lacking. Otherwise, the Ram 3500 wins our hearts in a segment full of overachievers. 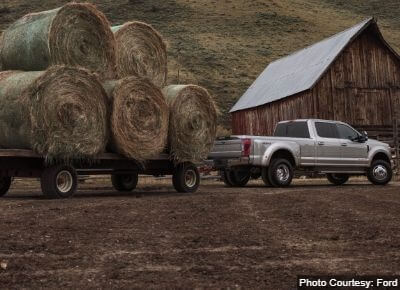 For us civilians, the Ford F-350 dually is as big and bad as you can go. It lacks the grace of the Ram and the showiness of the GM twins instead of adhering to a no-frills, function-over-form mentality.

Diesel power comes courtesy of a 6.7-liter PowerStroke V-8. There is no low-output version here: all F-350s with diesel power make 475 horsepower and 1,050 lb-ft of torque. 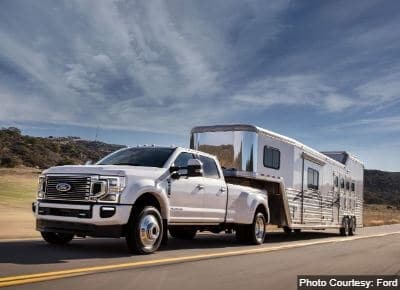 To help handle its 37,000 pounds, the F-350 offers the so-called Pro Trailer Backup Assist. This suite of cameras and features is headlined by a dial that you can use in lieu of the steering wheel to turn your truck and trailer while in reverse. The bundle also adds gridlines on the backup camera that adjust with steering wheel movement to show the anticipated direction of the truck and trailer.

The F-350 loses ground to the Ram in the cabin, where materials and design aren’t as elegant, and the appointments aren’t as lavish. That said, a loaded F-350 still feels mighty indulgent - and rightly so, considering this heavy-duty truck can cost as much as six figures. 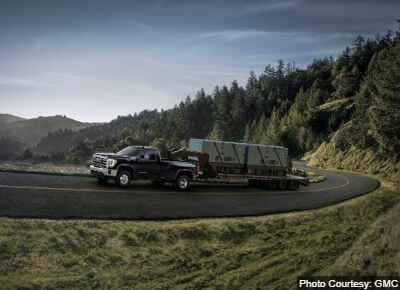 Why the GMC in third place, and not the mechanically-identical Chevrolet Silverado 3500HD? When the style is about the only significant differentiator between two vehicles, you generally go with the more attractive.

The Sierra’s 6.6-liter Duramax diesel, while renowned for its smoothness and refinement, lags behind its competitors in power output: its 445 horsepower and 910 lb-ft of torque are more than adequate for nearly all buyers, but lack the wow factor of the other two heavy-duty trucks and their four-figure torque ratings. It can still tow a substantial 36,000 pounds, though.

Where the Sierra leads is in technology. First off, it has a trick six-way tailgate that has now proliferated across most trim levels. There’s also a whopping 15 different camera views, a figure that embarrasses the other trucks here. Among those camera views is a particularly nifty one that can peer ‘through’ the trailer to the road behind it.

Other neat features include a jackknife alert, a rear camera mirror, and a 15-inch head-up display that is easily the largest in the segment. GMC also offers an in-truck trailering app that enables custom trailer profiles, monitoring of trailer tire pressure, maintenance reminders, and instantaneous efficiency figures. This data can also be viewed via a phone app as well.

All the tech can’t distract from the lower towing figures and - more significantly - the subpar interior quality that trails both Ford and Ram. GMC has done a great job using technology to make trailering easier than ever - now it just needs to design a smart-looking interior to match. 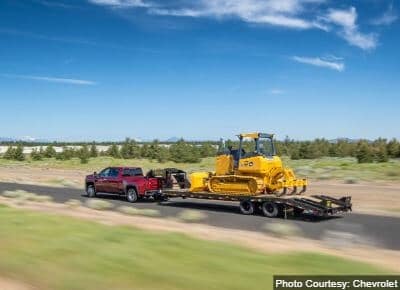 We’ll be brief discussing the dually Chevy, not because it is a lesser truck - though it does rank last in our ranking - but because it is so similar to the heavy-duty GMC. Interior styling, powertrain specs, and many of the features are shared between these two pickups.

GMC has trended towards a more conservative look; Chevy goes right for the kisser with its bold, heavy-handed look. It is easily the loudest-styled, most polarizing truck of the bunch.

Under the hood, things are more familiar, with the same 6.6-liter gas and diesel V-8s used in the Sierra HD. The Silverado 3500HD dually tows and hauls the same max weight as its corporate sibling: up to 7,442 pounds of payload and 36,000 pounds of towing capacity. 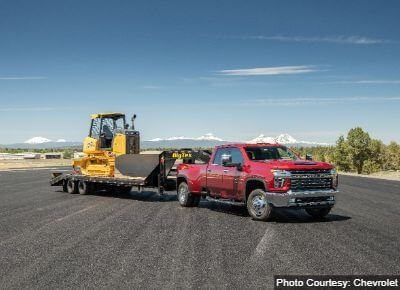 Much of the same tech is shared, including the in-truck trailering app and the new jackknife alert. The multitude of camera views carries over as well.

So where do the trucks differ? Well, you won’t get the GMC’s six-way tailgate on the Chevy. The Silverado, meanwhile, offers a few exclusive special editions, such as the new-for-2021 Carhartt edition. It’s also the cheaper truck, but only by a few hundred dollars per trim - even the High Country trim, the most luxurious version, is nearly as much as a Sierra Denali HD.

In the end, our complaints with the Sierra carry over to the Silverado. It’s a good truck, but Ram and Ford have raised the bar. We can’t wait to see how GM reacts.

What is a dually truck?

A dually is slang for a dual-rear-wheel truck. It means that the truck has two rear wheels per side instead of the usual one. The extra pair of rear wheels is why these trucks can tow such prodigious weight. Only 3500-grade trucks offer dual rear wheels.

Primarily the suspension and the frame strength. To tow the weight that they do, 3500-series trucks need some seriously heavy-duty upgrades so they don’t collapse under all the tonnage they can pull. Typically, this entails additional high-strength leaf springs in the heavy-duty leaf-spring rear suspension, a heavier, stronger frame, and other upgraded suspension components.

Currently, the Ram, which can tow up to 37,100 pounds when properly equipped. However, don’t expect that to last - Ford or GM will surely try to top that figure in the coming year.

Which 3500 truck has the highest payload?