If you haul or tow serious loads, you need diesel power.

While diesel pickups were the exclusive purview of the heavy-duty class for a long time, that is no longer the case - Ford, Ram, and Chevrolet all offer the oil-burning engines in their light-duty full-size trucks. Jeep and Chevy now even offer their midsize pickups with diesel power. 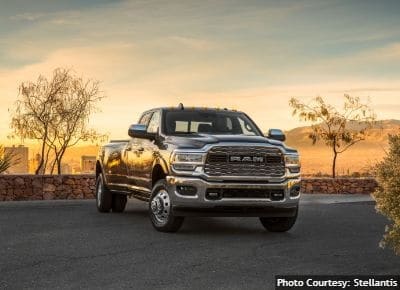 Tow ratings among the heavy-duty pickups are an endless game of one-upmanship. It’s a game where the consumer wins every time.

For 2021, Ram again takes the crown, wrestling it from Ford by a measly 100 pounds. Hitting that figure means buying the excellent Cummins inline-six turbodiesel, among other very particular equipment and body style configurations.

Cummins has been associated with Ram since the 1980s when diesel power first made a splash among burly pickups. Since then, the segment has taken off - and the Cummins unit continues to be a standard-bearer for the segment. Bulletproof durability and record-breaking towing capability are among its many attributes.

It’s also a strongman. In 2019 Ram was the first to crack the 1,000 lb-ft of torque barrier; now, power is up to 1,075 lb-ft of torque and 420 horsepower in the optional high-output variant available only on the 3500. That engine, along with a newly strengthened frame, gives the Ram its mighty pulling power.

The rest of the Ram is as excellent as its diesel engine. The interior is more inviting than its Ford, Chevy, or GMC counterparts, and critics have applauded the improved ride and handling. It’s no luxury car but is certainly a more refined beast than its predecessors. No doubt about it, it’s the complete package. 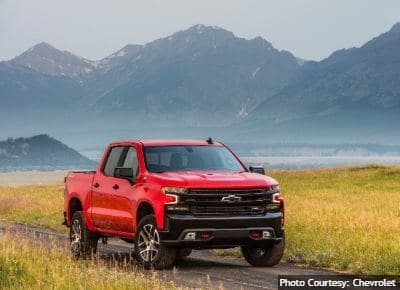 Chevy’s Silverado is the most recent to the light-duty diesel game, but the additional time it took in engineering a viable competitor shows in the final product. Among full-size truck diesels, it boasts excellent power and performance for a relatively bargain price. That makes it a winner in our book.

Interestingly, the Duramax diesel in the Silverado 1500 uses a 3.0-liter engine - the same displacement as the diesel Ram 1500 and F-150. Unlike those engines, the Silverado engine lines its cylinders up in a row. The inline-six design - inherently smoother than a V-style layout - adds an element of refinement. The 10-speed automatic, praised by many for its seamless shifts, also factors into the Silverado’s drivability.

As for power, the Silverado Duramax is churning out 277 horsepower and 460 lb-ft of torque. Compared to its rivals, those figures beat the diesel F-150’s 250 horsepower and 440 lb-ft but can’t quite outdo the 260 horsepower and 480 lb-ft generated by the Ram 1500 Ecodiesel.

The Chevy can use its ample power to tow up to 9,500 pounds. Admittedly, this figure isn’t as much as the diesel Ram or F-150 can pull. But the upside is that the Chevrolet is the most efficient of the three trucks - something that will likely hold true regardless if there’s a trailer hitched to the bumper. Unladen, the EPA says the Duramax-powered Silverado can return up to 23 mpg city and 33 mpg highway.

Opting for the diesel Chevy requires, at most, another $2,400 over the V-8. At Ford and Ram, the upcharge is closer to $4,000 and $5,000, respectively. That’s a significant savings, and the lower fuel costs incurred by the more efficient Chevy mean even more money is saved over the course of ownership.

Efficient, smooth, and affordable, the Silverado 1500 Duramax is our choice in light-duty diesels, even if it doesn’t tow quite as much as its rivals. 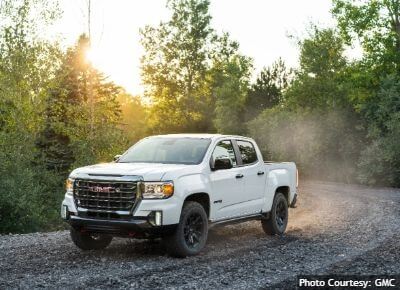 This is a two-horse race, as the only midsize trucks currently available with a diesel engine are the Jeep Gladiator and Chevrolet Colorado (and its identical twin, the GMC Canyon). In-person, the Gladiator seems to win on cool factor alone - after all, it’s essentially a Wrangler with a bed and a 7,650-pound towing capacity. But price and other practical considerations lead us to recommend the Chevy over the Jeep.

The Colorado is also the more well-mannered truck. Consider: the Chevy can be had in two different cab styles and bed lengths - the Gladiator is only offered in one configuration. The Colorado has a maximum diesel tow rating of 7,700 pounds, which is more than the diesel Jeep. The Chevy’s 1,500-pound maximum payload is 200 or so pounds higher than the Gladiator’s max payload. See a trend here?

The EPA rates the Colorado for up to 20 mpg city and 30 mpg highway - the latter a class-leading figure among any midsize pickup truck. The Gladiator is better in the city, but highway efficiency remains the forte of the Colorado.

We could go on, but you get the point. The Colorado doesn’t have the wow factor of the Gladiator, but it just works better in real life in every meaningful way, from efficiency to payload to price. Considering the Colorado came out way back in 2014, this is a testament to how good these trucks are. GM’s midsize pickup may be getting old, but it isn’t past its sell-by date just yet.

Which Diesel Truck Is the Best?

But if you need a more manageable truck - and trust us, you don’t want to drive a behemoth Ram 3500 every day if you can help it - the light-duty Chevy Silverado wins on efficiency and affordability. The Chevy Colorado offers a similar sales pitch at an even smaller and cheaper scale.

Depends on your needs. Leave the HD diesel trucks for those who regularly tow massive RVs or trailers; the rest of us can make do with the more maneuverable and affordable light-duty trucks. Of those, Ram has been offering their EcoDiesel the longest, but Ford and Chevrolet have also built great reputations with their Duramax and Powerstroke brands.

Generally yes. These engines don’t rev high and are built for serious capability. It takes a lot to break a diesel, and it’s common to find older diesel trucks with 250,000 miles on the odometer selling for five figures. Much of their legend and lore stems from how indestructible these engines are, especially the heavy-duty powertrains.

Does Toyota or Nissan offer a diesel truck?

Toyota does not, unfortunately, but Nissan does. The Cummins-powered Titan XD is a tweener truck - Nissan claims it has some of the capability of the HD trucks but at a price point akin to the light-duty pickups. However, the towing figures of the latest American full-size trucks poke holes in this claim, as the light-duty models from Chevy, Ford, and Ram now tow more than the big Nissan.

What’s the most efficient diesel truck?

The Chevrolet Silverado 1500: it is rated for up to 33 mpg on the highway by the EPA. That’s more than its rivals and even more than the smaller Chevy Colorado diesel. HD pickups aren’t rated by the EPA due to their weight and size, but the most efficient of them probably returns no more than 15 mpg unladen on a good day.