Although a small hatchback or sedan will suffice for most commutes, most vehicle owners use their vehicle on weekends for other activities besides driving to and from their nine to five. SUVs are flexible cargo haulers and they work well for long-haul vacations too.

We decided to choose the best SUVs from a variety of segments that a commuter will find are frugal, reliable, safe, and comfortable for driving. This is not a horsepower contest, handling challenge, or a ground clearance comparison.

The vehicles we list here are ones that you can happily use in your slog to work and still find enjoyable and useful on your days off.

* Annual fuel costs are estimates from the EPA, and reliability ratings are from the Consumer Reports Predicted Reliability Rating study. 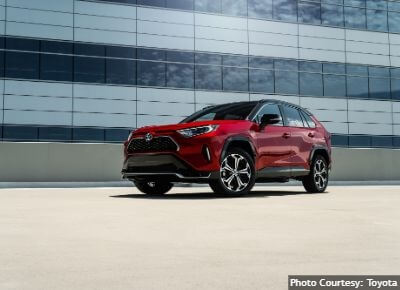 Toyota’s RAV4 had to be on this list. How can any list ignore the top-selling non-truck in America? People can and do use all the RAV4 trims to commute, but one is very special. The RAV4 Prime Plug-In Hybrid-Electric Vehicle (PHEV).

The Prime trim has the ability to drive up to 42 miles using electricity alone. When doing so, it is the most enjoyable RAV4 trim in which to drive. We tested the Adventure, Hybrid, and Prime trims this past year, and the Prime stands out in every measurable way.

If your commute is longer than 42 miles, the RAV4 Prime still returns 38 MPG when operating as a hybrid, and you always have the electric power boost when starting. The battery never really gets to zero. All-wheel drive is standard on the Prime trim, so wicked weather won’t be an excuse to be late for work.

With over 300 hp, the RAV4 Prime is one of the fastest vehicles on this list and it is also among the quietest. This is a commuter vehicle that checks every box. 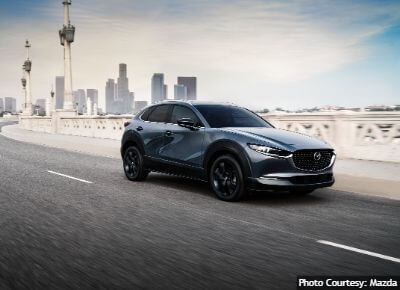 Our choice for the best sporty crossover is the Mazda CX-30. Mazda builds nothing but sporty vehicles in this tester’s view. The CX-30 is a two-row compact crossover a bit smaller than the RAV4-sized crossovers. However, it feels roomy from the driver’s seat, and when you are commuting that is all that really matters.

The CX-30 is sleek, stylish, and has a look we think most commuters will agree is attractive inside and out. Although we like the turbocharged models, the base 2.5-liter engine is more than adequate for a ride to work. Since Mazda uses a geared transmission, you need not worry about a poorly-made CVT rubber-banding its way through traffic. This crossover is easy to drive and comfortable at 5 or 75 MPH. This is one commuter car that you will be happy to be behind the wheel of on weekend jaunts to the mountains.

You may qualify for deals and incentives, check out this month's Mazda deals here. 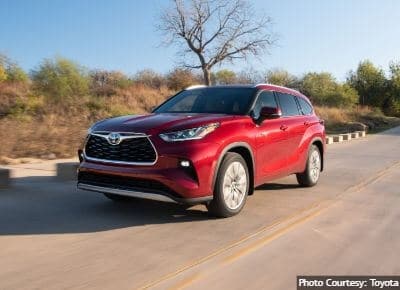 Commuting eats up your fuel budget, and three-row crossovers can be thirsty. That is, unless you have a Toyota Highlander Hybrid with 36 MPG. Toyota’s Highlander has an annual fuel cost that is $750 less than an equivalent Honda Pilot. Over ten years that is a whopping $7,500 in fuel savings.

The Highlander Hybrid can seat up to seven on weekends, so soccer practice carpooling is not a problem. It is also available in all-wheel drive, so winter ski trips won’t be spoiled by bad weather. The Highlander also earns the IIHS Top Safety Pick + Award. It’s hard to imagine a better three-row commuter crossover. 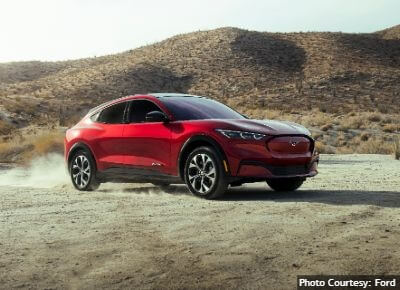 No vehicle we tested this past year impressed us more than the new Ford Mustang Mach-E battery-electric vehicle. The Mustang Mach-E has multiple drive modes, including “whisper.” With up to 300 miles of EV range, optional AWD, and power to spare, the Mustang Mach-E can handle commuter duty with ease.

We found the Mach-E relaxing to drive in Whisper mode. Those who have not yet tried an electric vehicle may find this Mustang is the best first EV one could imagine. One-pedal EV driving reduces your fatigue and actually saves energy. In our back-to-back drives with Tesla’s Model Y, we preferred the infotainment, ride comfort, and lower noise levels the Mustang Mach-E offers. 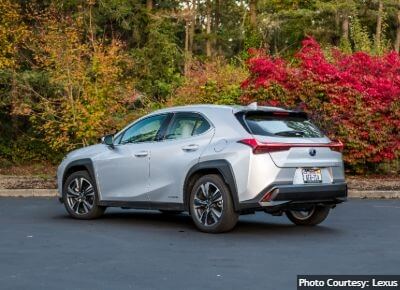 The Lexus UX 250h is a compact, car-like crossover with a very relaxed attitude. The ergonomics of the UX 250h are nearly ideal. You need only use your fingertips to control most of what you might adjust in the UX 250h’s unique infotainment interface.

The UX 250h is a hybrid, so it is great on gas. However, it is also a Lexus, which means it offers more luxury for the dollar than almost any other brand. Those who are looking for a compact premium commuter vehicle should start with the UX 250h. In our testing in Boston traffic and also the back-roads of New Hampshire the UX 250h won our hearts. 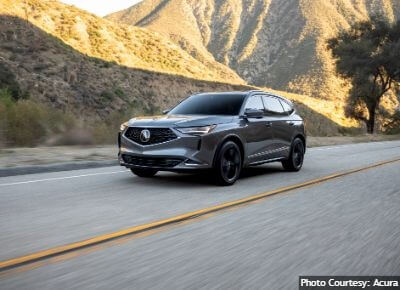 OK, you caught us. We invented this category just to include the Acura MDX and RDX. However, the ELS Studio 3D audio system they offer on top trims is so much better than the premium audio found in many more expensive models we just had to highlight it.

Audiophiles who want to enjoy some great music on their ride to work will find that the roof-mounted speakers and audio-”un-compression” technology the MDX and RDX offer can make even internet-based streaming music sound crystal clear. If you love music and plan to be in a car commuting for many hours per week, the three-row MDX or two-row RDX should be on your list of vehicles to check out.

What is the best commuter SUV for gas mileage?

Our research shows that the Toyota RAV4 Prime has a 94 MPGe rating and an annual fuel/energy cost of just $850.

What is the best commuter vehicle?

Crossovers have become the defacto standard family and commuter vehicles in America. We suggest those looking for a great vehicle to commute check out the RAV4 Prime and Highlander Hybrid from Toyota and the Ford Mustang Mach-E. The Lexus UX 250h, Acura RDX and MDX, and Mazda CX-30 also make our list of best SUVs for commuting.

Which crossover is the most reliable?

Our list of commuter crossovers includes the Mazda CX-30 and Lexus UX 250h, both of which have a 5/5 predicted reliability rating from Consumer Reports.

What is the best battery-electric SUV for commuting?

Our pick for the best EV SUV for commuting is the Ford Mustang Mach-E. It gets up 300 miles of driving range on battery and provides plenty of power for any commute.

What is the best luxury SUV for commuting?

Our pick for the best luxury brand SUV is the Lexus UX Hybrid. It’s an ideal choice for those looking for a compact, premium commuter vehicle.

What is the best three-row SUV for commuting?

The Toyota Highlander Hybrid is a great choice for those commuting with a family or a large group of friends. It can seat up to 7 passengers and earns high safety ratings.